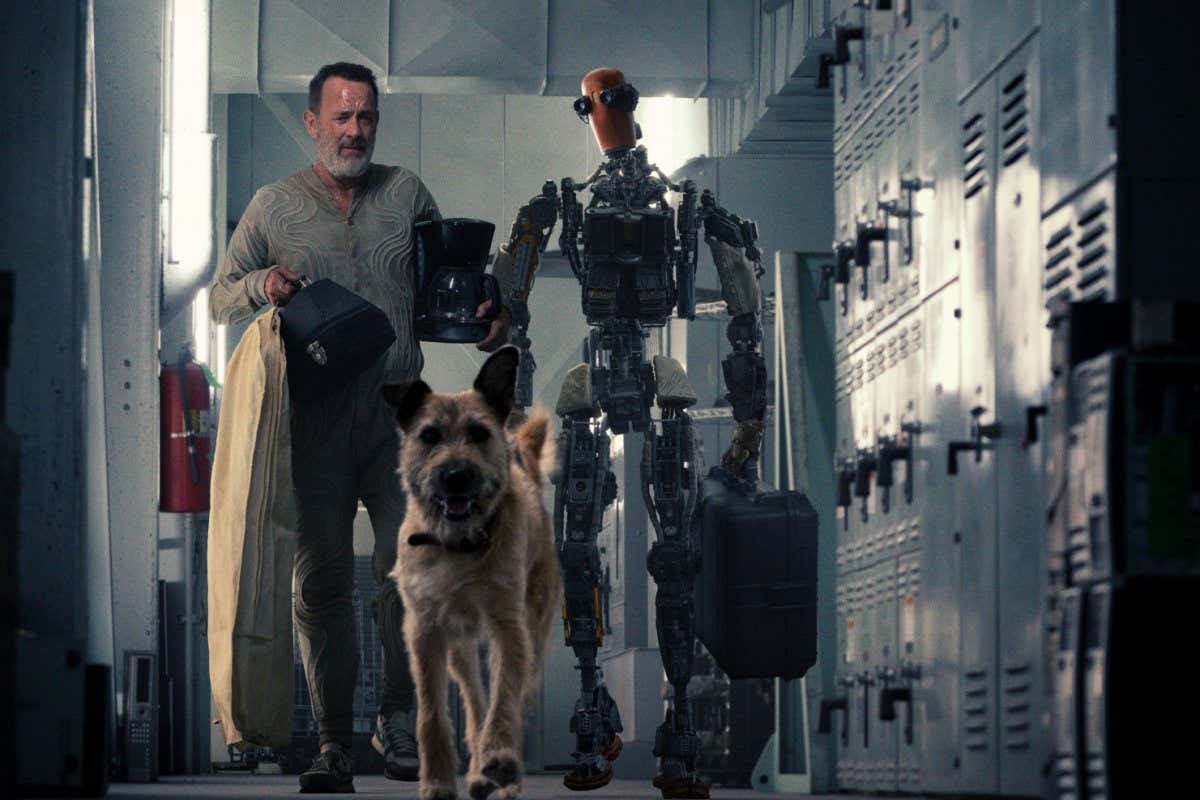 Finch review: Even Tom Hanks can’t save this tame dystopian

FINCH has all the elements to be a dark, but ultimately uplifting, post-apocalyptic, sci-fi comedy drama. Not only does it boast Robert Zemeckis as a producer, it also comes from Steven Spielberg’s studio Amblin Entertainment and marks the second feature film of Miguel Sapochnik, who directed key parts of the iconic HBO series Game of Thrones.

The primary reason it should captivate audiences throughout, though, is that Tom Hanks plays the title character. Hanks is in pretty much every scene as Finch, an ailing inventor who is the last person on Earth. Since he still has his trusty and beloved dog Goodyear by his side, Finch decides to build an android named Jeff to look after his companion once he is gone.

But after learning of an impending storm that is going to destroy his home, Finch decides to leave St Louis, Missouri, and drive Jeff and Goodyear across the US to San Francisco in his run-down motorhome.

Along the way, Finch tries to teach his constantly malfunctioning robot what it means to be human so that he can truly protect Goodyear, all while trying to find food and safety in the dangerous and ravaged post-apocalyptic world.

Unfortunately for Hanks fans, Finch never actually comes close to delivering on its potential. While Sapochnik is able to create impressively menacing visuals of enormous storm clouds wreaking havoc, this feeling of peril quickly dissipates. Once gone, it never returns, as there aren’t enough set pieces to make you sit up, let alone put you on the edge of your seat.

At the same time, while the reasons for the destruction of civilisation are heavily teased, Sapochnik’s direction and Craig Luck and Ivor Powell’s script lack the detail or weight to really make the film’s message about the dangers of climate change connect.

The main reason why Finch falls so short, though, is that the camaraderie and relationship between Finch, Jeff and Goodyear doesn’t come close to resonating. Since Finch is struggling with illness, Hanks’s portrayal is rightfully timid and frail. But this means he never manages to bring out the humanity of the character, who spends most of the film either coughing up blood or getting annoyed at Jeff.

Somehow, Hanks was able to develop a more emotional connection with a volleyball covered in blood in Zemeckis’s 2000 survival drama Cast Away than he is with Jeff and Goodyear. Finch was clearly inspired by that film, as well as Spielberg’s repeated use of science fiction to explore fatherhood. But it doesn’t add anything to the genre or explore the theme in an insightful manner.

It also doesn’t help that Caleb Landry Jones’s vocal performance as Jeff is too flat. As a result, the repeated attempts at comedy fail. Instead, we are forced to endure scenes of Jeff falling over or misreading situations because he takes things too literally. All of which quickly becomes tiresome.

Despite all this, Finch isn’t a complete miss. The score from Gustavo Santaolalla is particularly rousing, while Sapochnik and his editor Tim Porter make sure that there is a steady pace that averts a full descent into tedium. Jo Willems’s cinematography glistens, too. It perfectly complements Sapochnik’s framing, which means that a lot of the shots are utterly gorgeous.

It is just a shame that Finch doesn’t actually do anything more heartfelt and thought-provoking with these images. Instead, it is the cinematic definition of style over substance and is ultimately so disappointingly tame that not even the star power of Hanks can salvage it.