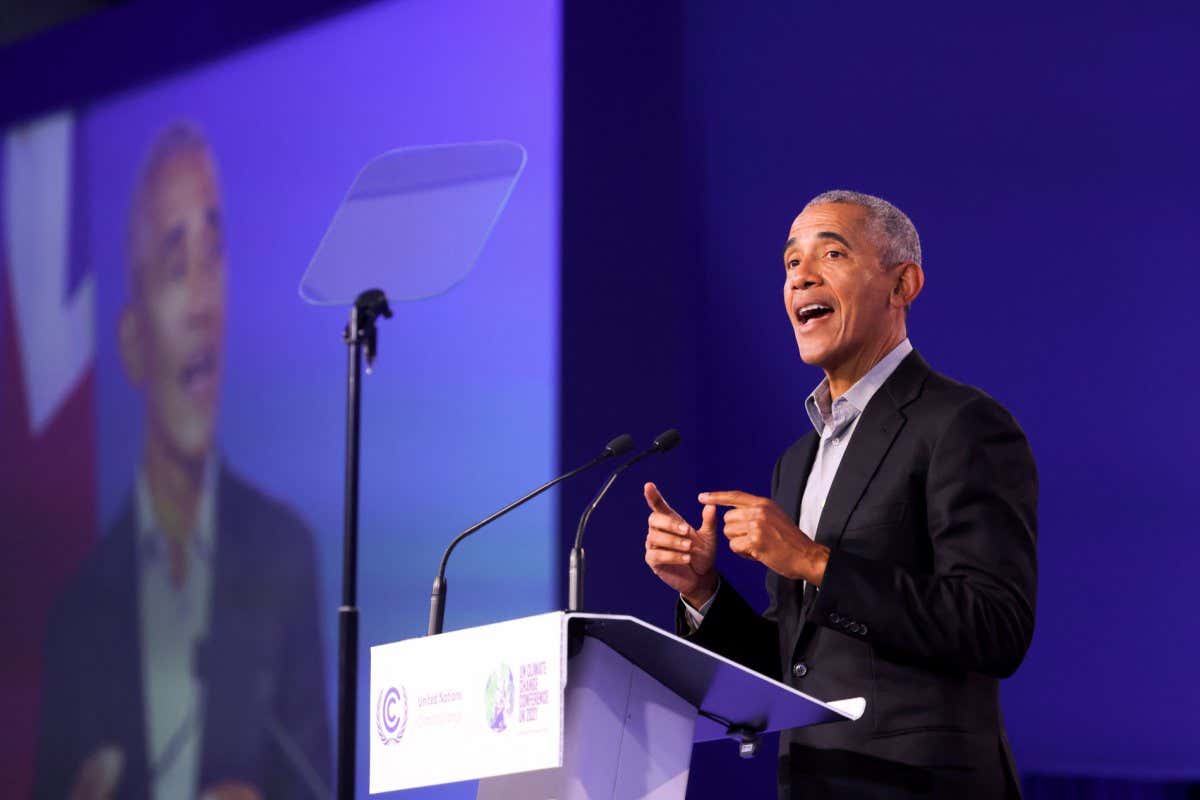 Former US president Barack Obama gives a speech during COP26 in Glasgow, Scotland

It’s the start of the second week of the COP26 international climate summit in Glasgow, UK. After the many announcements and promises in the first week, the focus is now shifting to the actual negotiations. How far have they come – and what is left to do?

The situation today looks decidedly tangled. Former US president Barack Obama tried to cut through the thicket with a full-throated speech this afternoon, imploring negotiators both to celebrate the achievements so far and to push for more. In a speech directed as much to people watching from outside the conference as to the negotiators themselves, Obama said that solving the climate crisis will be a long job.

The most important output of COP26, as with any summit, is a text that all the countries involved can sign up to. This text will set out what they have promised to do. It is in effect a new international treaty.

Negotiators have been quietly plugging away at this for the past week. The result has been a torrent of draft documents, queries, responses, redrafts, fiddles, quibbles, quibbles about the quibbles, metatextual quibbles about the existence of quibbling as a concept and much more – all helpfully available on the COP26 website under the heading “documents”. It is perhaps best understood as the Wikipedia edit thread from hell: the use of one unwelcome word among 10,000 can lead to intense discussions lasting days.

The underlying difficulty is that every country has to agree or there is no deal, so countries that are desperate for urgent emissions cuts have to sign up to the same text as countries whose economies currently depend on oil exports. And they need to follow through on those commitments, not just make the pledges.

“Greenwashing is for me now the new climate denial,” said Laurence Tubiana, a key architect of the landmark international climate treaty known as the Paris Agreement, at a press conference.

All the exciting announcements from last week, such as India promising to hit net-zero emissions by 2070, were separate from the core negotiations. The real test of COP26 is how strong the final text is. What promises will it contain? How firmly will they be enforced? And what will they add up to in terms of greenhouse gas emissions and aid for countries vulnerable to climate change?

The state of play

To some extent we are reading tea leaves, but the current situation seems decidedly mixed. At a press conference today, COP26 President Alok Sharma said that “finding consensus is not going to be straightforward”. Sharma had planned to have a stocktaking meeting on Saturday, to figure out where the talks had got to, but this had to be pushed back to today. He now wants a draft of the main text to be available tomorrow, for the texts to be more or less done by Wednesday, and final issues to be sorted out on Thursday.

There are concerns about the documents produced so far. One such document, called a non-paper, is a list of terms that are expected to be included in the main text. It has been pointed out that it doesn’t mention, for example, phasing out fossil fuels. That might mean the main text is currently rather weak – or it might be that the non-paper isn’t a good guide. When asked about it at a press conference, Patricia Espinosa, executive secretary of the United Nations Framework Convention on Climate Change, said it “does not reflect texts”.

There is also the usual effort from vested interests, particularly the fossil fuel industry, to insert themselves into the negotiations. An analysis led by campaign group Global Witness found that the fossil fuel industry has sent 503 delegates to the conference, more than from any single country. And an observer for environmental charity Greenpeace claimed that the Saudi Arabian delegation is trying to block several key steps.

For anyone who wants to see strong action to stop the climate crisis, this sort of thing is immensely frustrating. Obama encouraged people to hold onto their anger, and to use it to keep fighting. “I guarantee you, every victory will be incomplete,” Obama said. “Sometimes we will be forced to settle for imperfect compromises because even if they don’t achieve everything we want, at least they advance the cause.” But that, he suggested, is human society for you. “If we work hard enough for long enough, those partial victories add up. If we push hard enough, stay focused enough and are smart about it, those victories accelerate and they build momentum.”

It’s going to be a bumpy week. But maybe there will be something to show for it at the end.

Officially, today was about two things: adaptation, and loss and damage due to the effects of climate change. By the end of the week we will know if anything much is going to be done about either.

Adaptation means helping people who are directly affected by climate change – for example, those living on storm-wrecked coasts – to find ways to survive and thrive. That is going to require a lot of costs for lower-income countries, who are often at the front line of these impacts. New Scientist’s Richard Webb listened to some of the discussions around who is going to pay for this, which are being held very much in the shadow of the higher-income countries failing to make good on their promise to supply $100 billion of funding per year by 2020 for lower-income countries.

At a press conference for the Alliance of Small Island States, Milagros De Camps at the Ministry of Environment and Natural Resources of the Dominican Republic said: “There’s been a lot of pledges made. It was very inspirational… but once you sit down in the negotiating room, you see the same political issues.”

Apparently higher-income countries are pushing for a version of the text surrounding long-term funding that essentially starts from scratch – meaning it implicitly doesn’t mention existing promises like the $100 billion. A representative from South Africa described this proposal as coming “from out of space” and asked the negotiators to “send it back somewhere and if that’s the dustbin we’re happy”.

Loss and damage is a related bone of contention. It refers to climate damages that can’t be adapted to because they are so severe, so the only solution is to compensate those affected. As Sharma pointed out, “loss and damage has historically been seen as a polarising issue”. Sharma made some positive noises about the “mood music” around the subject, but will that translate into real action to compensate people harmed by climate change? According to Mohamed Adow at the Kenyan thinktank Power Shift Africa, “The US has been doing everything it can to block discussion of loss and damage finance.”

It seems safe to say not much agreement has been achieved so far on long-term climate funding. Watch this space.

“How do we close the gap between what’s necessary for our survival and what seems politically possible right now?” Former US president Barack Obama, cutting to the core of the problem. The climate crisis can be thought of as our political cultures and beliefs running up against the harsh realities of the Earth system. The 2015 Paris Agreement went some way towards solving this, by creating a system whereby countries are required to return every five years with new plans. This enabled climate action to be ratcheted up, so refusenik countries could be brought on board gradually, instead of hoping that one make-or-break summit would solve everything. The Paris Agreement arguably succeeded because it took human failings into account.

The server is temporarily unable to service your request due to maintenance downtime or capacity problems. Please try again later.

Additionally, a 503 Service Unavailable error was encountered while trying to use an ErrorDocument to handle the request.