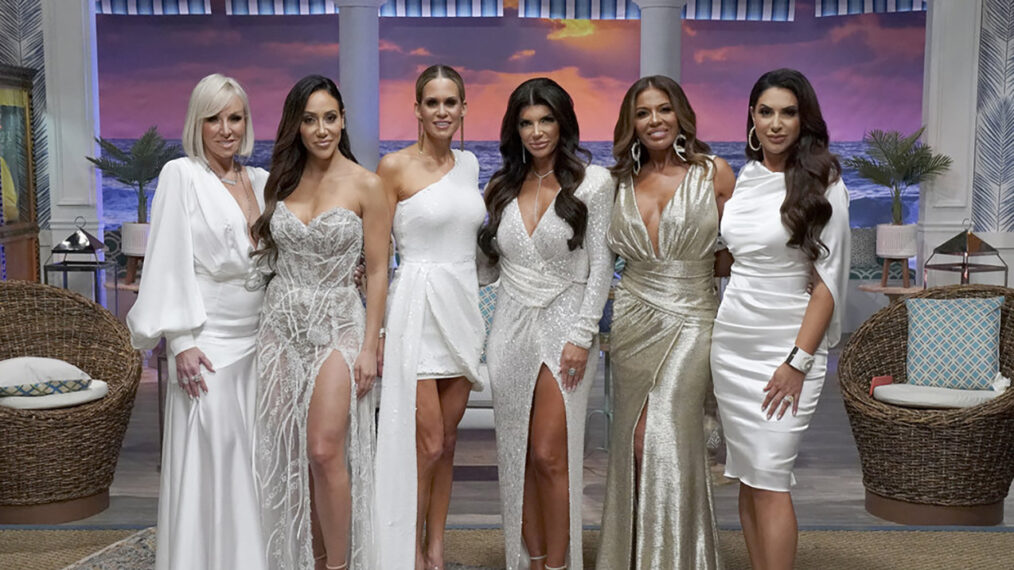 No marriage, family, or friendship is safe — so what else is new in the Real Housewives universe? Bravo’s hit franchise takes the exit for New Jersey, so we went straight to Teresa Giudice, the series’ only remaining original cast member, for intel on its 12th drama-packed season. (She’s above, third from right, flanked by Margaret Josephs, sister-in-law Melissa Gorga and Jackie Goldschneider on the left; Dolores Catania and Jennifer Aydin on the right.)

The resilient divorced mom of four daughters fills us in. Almost immediately this season, some of the ladies are mouthing off about you and your new fiancé, Luis Ruelas. When will they learn not to mess with the queen?

Teresa Giudice: Why do you think they always come for me? It’s like, if you [want] any relevance, come for the O.G. They try but never succeed. [Laughs]

Who do you beef with the most? In the trailer, you actually shove a pile of dishes onto Margaret!

A lot of the women get into it with each other. And Margaret’s just very thirsty. I’m so done with her. I really thought she was my friend because I lead with my heart. I never throw the first punch…but I always finish the fight.

How did you prep Luis for this? You bought a home together and we see you merge families.

This is so not him. He does not wanna be on TV. He’s a private guy. When people say, “Oh, he’s doing this for the fame”? He’s not. Can you put that in capital letters?

You all head down to Nashville — there’s mechanical bull riding, country music recording.… Did you enjoy yourself?

I liked the house we rented. It was beautiful. But I don’t think I would ever go back. It’s great for girls’ trips, because it’s a lot of bar-hopping, stuff like that…. I’m a little past that now.

Overall, though, it seems like Season 12’s positives outweigh the negatives.

Definitely my year in love. I found the love of my life, and he’s everything I’ve ever wanted. I didn’t think perfect existed, right? Pretty close. I would say 9.9.