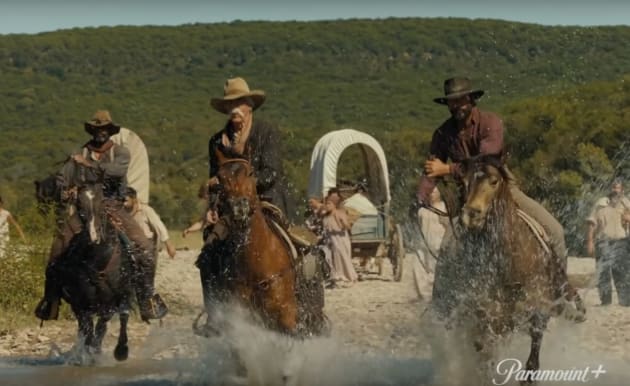 Delving into the origins of the Dutton family in 1883 will be a fun experience.

Months after the preliminary cast of the Yellowstone spinoff was revealed, Paramount+ is revealing all the goodies ahead of launch.

Below, we’ve rounded up all the new faces and who they’ll be playing when the series launches on December 19.

– Marc Rissmann will play Josef, a European immigrant who is married to Risa, who travels with an employed crew to guide his group across the frontier.

– Eric Nelsen will play Ennis, a young, handsome cowboy who agrees to help escort a group of inexperienced men, women and children north to find a home.

– James Landry Hébert will play Wade, a young cowboy who finds himself as part of a crew for a caravan of hopeful travelers making their way north for a better life.

– Dawn Olivieri will play Claire, a fierce, practical and sharp widow who joins her brother and his family on a trip to find a new home.

– Emma Malouff will play Mary Abel, the daughter of Claire and the niece of James and Margaret Dutton, who joins her family on their journey West.

– Alex Fine will play Grady, an experienced cowboy and the leader of a crew of six drovers, who agrees to help an inexperienced crew round-up longhorn for their long journey.

– Gratiela Brancusi will play Noemi, a woman with two young boys who is recently widowed.

– Anna Fiamora will play Risa, a young immigrant woman who is married to Josef and joins the traveling camp to move west.

– Amanda Jaros will play Alina a weary but hopeful immigrant woman who speaks little English but has much resolve.

– Nichole Galicia will play Guinevere, a local prostitute who works in Fort Worth, Texas.

– Stephanie Nur will play Melodi, a beguiling prostitute who works at the saloon.

– Noah Le Gros will play Colton, a young cowboy in the wagon camp who knows the ropes and has some smart insights about the dangers of their journey.

1883 follows the Dutton family as they embark on a journey west through the Great Plains toward the last bastion of untamed America.

It is a stark retelling of Western expansion, and an intense study of one family fleeing poverty to seek a better future in America’s promised land – Montana.

Yellowstone has been a massive success for Paramount Network, breaking a string of records in its recent return to the cabler.

The big question surrounds whether people will follow the franchise to streaming.

What are your thoughts on the cast?

David Giuntoli on Karma for Eddie on ‘AMLT’

Newfound species of wee frogs found in Mexico can fit

Topshop is Coming to Nordstrom Canada + Other Fashion News

‘Harley Quinn’ Is Getting a Kite Man Spinoff Series

How to improve your digestion

‘Harley Quinn’ Is Getting a Kite Man Spinoff Series

David Giuntoli on Karma for Eddie on ‘AMLT’

Topshop is Coming to Nordstrom Canada + Other Fashion News

7 Shoe Trends That Have Us Excited for Spring Fashion

Why Are We Drawn to Themes of Betrayal?

Newfound species of wee frogs found in Mexico can fit

How to improve your digestion

Companies that are aggressive on taxes fall short at managing