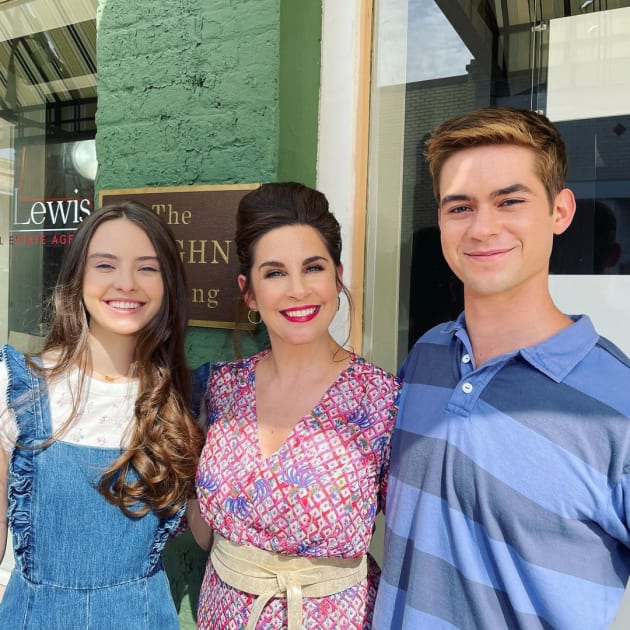 Sweet Magnolias: Allison Gabriel on Her Rivarlry With the Magnolias

Allison Gabriel gives memorable performances in all of her roles. She has been portraying the Mayor’s wife, Mary Vaughn Lewis, in Netflix’s Sweet Magnolias premiered in 2020.

As the Mayor’s wife, Mary Vaughn treats Serenity like her kingdom and has made long-time rivals of the Magnolias Maddie Townsend (JoAnna Garcia Swisher), Dana Sue Sullivan (Brooke Elliott), and Helen Decatur(Heather Headley).

We chatted with Allison about the long-time rivalry, Nellie and Kyle’s romance, and her hopes for Mary Vaughn’s character in a potential Season 3.

Hello, Allison. I’m a massive fan of Sweet Magnolias. Tell me what started the rivalry between Mary Vaughn and the Magnolias.

I don’t know what the writers are working with because it feels more significant than that. I have my theories as an actor. I think you have to choose and move forward and create your backstory. I believe Mary Vaughn always wanted to be a part of the Sweet Magnolias, and she has always felt on the outside.

That makes sense. I think she felt left out. They seemed like a tight-knit group. I know that’s how they played in the later books of the series. I have read them.

Over the years, those things got stirred, and they became more significant than they are.

True. It seemed like many of the issues have been fueled by Cal in both seasons, and Mary Vaughn went digging into his past. Why does she have it in for Coach Cal?

Can you reveal Your Source on how you got all the dirt on Cal?

I don’t know. We only know what’s in the script, so I can’t tell you. I wish I knew.

I was just wondering that. How is this war with the sweet Magnolias and them going after her husband affecting her children are dating Annie and Kyle?

I don’t think Mary Vaughn knows any of that. I know she doesn’t. So, there is a bit of a Romeo and Juliet situation there.

It’s fascinating, and I am not sure that Maddie and Dana Sue know this romance is brewing. I don’t think the older generation knows what’s happening. They believe the teens are friends like they’ve always been. I think in season 3. Hopefully, we’ll find out more about that if we get it.

Very true. I thought this would be interesting, especially with Annie and Jackson and Kyle and Nellie having crushes on each other.

Kyle and Nellie have been brewing for a long time. Recently, I worked on a play, and one of the parents was horrified by how the teens talked to their parents. I asked her if she was around them 24/7 because it’s interesting what our kids get into when we’re not watching.

I think it’s an interesting beat to play with that. Kids have their world and their own lives, and the parents sometimes have no idea what’s going on, even though they live in the same house and live in the same tiny town. Interestingly, there are two entire world’s happening, the young and the older generation.

Yes, very accurate. Even though you and the Magnolias are rivals on the show, how do you get along with the other women on set?

We’re great. This cast and crew are some of the kindest people I’ve ever worked with. Joanna, or Jo as she likes to be called, is one of the kindest, most generous people. You feel like you’re her best friend. Heather is the nicest person in the world. I’ve only worked with Brooke for a few days because we never have scenes together, but she’s so lovely.

The entire cast and crew are such emotional and kind-hearted people. We’re a cast and crew of around 200 people, so being around that many friendly people was incredible.

I have never worked on a set as kind as this set is. I mean, we’re not all hanging out after work or anything because they have families, and we’re all tired of the end of the day, but when we’re on-site together, everyone gets along.

I’ve often heard Mary Vaughn referred to as the fans’ favorite villain on the show. How do you feel about that title?

Are you kidding? I never heard that. I love it! It’s so much more fun to play the villain than the heroine. The heroine is the audience projected off the screen. It’s usually the person we identify most with. You can’t do as much with that character as the villain. You can make some fun and wild voices with the villain. I’ll always take a villain over a heroine.

They are a lot of fun to play. What are you most looking forward to fans seeing in Season 2?

I think the cliffhanger at the end of Season Two is fun. It doesn’t include me, but it does have Helen, which I love.

I was going to say there are several cliffhangers at the end of season 2 this year.

That’s true. I was very focused on Helen.

I was screaming at the TV at Helen’s, but I was thinking of Cal’s at the restaurant too.

Cal has a lot of drama that comes up, and what was going on with my husband is a bit of a cliffhanger, too, since we don’t know what’s happening with that.

What am I most excited for fans to see? Mary Vaughn has lots of fun stuff that showed who she was when she wasn’t always on top of winning. That was fun to play with.

There’s a scene where I come to Maddie’s house, and I am just a flustered mess, and I love that theme for myself. It’s fun when I see many fan theories online and hear some talks they’ve done live on Instagram.

It’s fun to see that everyone’s well-researched and serious about how things will happen and knowing all the twists and turns are about to experience. That’s fun.

It certainly is, and there had better be a season three with how many cliffhangers we got this year.

Girl, I am with you. We got way too many. I’m dying to know what happens.

Yes. I hope actually, we get to see more of you, with your family, with your husband, and your kids. We don’t get to see a lot of family scenes with Mary Vaughn.

She’s an interesting character, and I’ve always been curious who she is behind the well-polished shell that she presents to the world. I hope that we will see more of her next season. But it is a big cast, and I understand that it’s a big town with many characters.

There’s only a certain amount of time in a shooting day. I take what I can get, but I would love to see more of Mary Vaughn and her private life or her private moment because you can’t have a shell that hard out in the world and not be a cuddly mess inside your personal life.

Thanks so much for chatting with us, Allison.