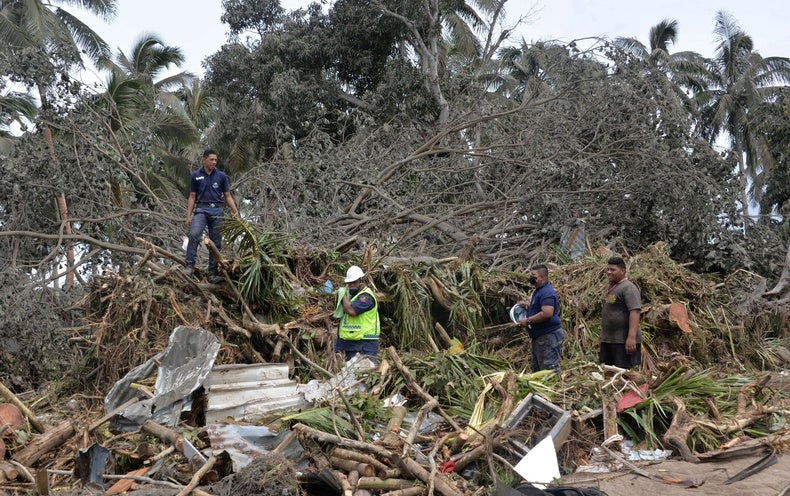 The Tongan Volcano Is a Reminder of Island Nations’ Vulnerabilities

On January 15 the Hunga Tonga–Hunga Ha‘apai volcano erupted in the South Pacific kingdom of Tonga, generating ashfall and a tsunami that affected 84 percent of the country’s population. A few days later, amid heat and humidity, scores of people all over Tonga came out to clean up debris and ash, even sweeping airport runways clean so aircraft carrying disaster relief could land.

Barely two weeks later the Tonga prime minister announced nationwide lockdown after the country recorded its first cases of community transmission of COVID-19. As a Tongan expatriate, I can attest to the resilience of the people there. But I am worried about the resilience of the land and the infrastructure, as Tonga is under constant threat of natural disasters, and lacks much of the funding and resources to manage them effectively.

As the nation recovers, I ask, what kind of future does Tonga envision for itself in 10 years? What about 20? Or 50? This vision is critical as we learn more about climate change and its role in the frequency and strength of natural disasters. The current effort to rebuild is a prime opportunity to set a new course towards a 21st-century reality that is safer, smarter, more robust and more investment-friendly for Tongans and the rest of the Pacific region.

In other words, how can the country’s infrastructure, communication systems and approach to development be redesigned to match the resilience of its people?

Like many other developing nations that are small islands, Tonga is prone to earthquakes, tsunamis, cyclones and floods. This is in part a result of being geographically remote and low-lying, and of its location in the seismologically active Pacific Ring of Fire. According to the 2021 World Risk Report, which includes 181 countries, this island nation of just over 106,000 people has the third-highest disaster risk worldwide, surpassed only by Vanuatu and the Solomon Islands.*

Since 2015, Tonga has weathered three extremely destructive category 5 cyclones (with other less powerful ones in between), a drought and an enormous volcanic eruption and tsunami. The impacts cannot be understated. Cyclone Gita in 2018 caused damage equivalent to 38 percent of the country’s GDP, while initial assessments of last month’s volcanic eruption shows damages of around 3 percent of GDP in the agricultural sector alone.

For most small island nations, disaster management and recovery are not new issues. However, this most recent calamity has highlighted some acute vulnerabilities, as well as the undeniable urgency to act. A major study on multihazard climate and disaster risks commissioned by the Government of Tonga and the Asian Development Bank (ADB) in 2020 contained some ominous findings. It showed that under a scenario in which sea level rises by one meter around the main island of Tongatapu, one quarter of all buildings and almost a third of power infrastructure would be permanently lost, along with 11 percent of roads and 16 percent of the water supply. Many of the low-lying areas identified in the study as most exposed to risk, were also the most impacted by the recent tsunami. The capital city of Nuku’alofa, which stands some 1.5 meters above sea level and is among the lowest-lying cities in the world, is particularly vulnerable.

Key issues worth considering at this point include taking a long-term “transformational” approach to rebuilding and resilience, beyond just disaster-proofing structures. While constructing hurricane- or earthquake-resistant buildings, erecting sea walls or improving drainage systems could address some of the challenges in the short to medium term, lasting solutions require a comprehensive, proactive long-term strategy to manage various risks.

For example, regarding Tonga, the International Monetary Fund points to relocating major infrastructure and, if necessary, migrating whole communities away from high-risk coastlines or low-lying areas, and rebuilding in safer low-risk zones. Different incentives could be offered or policies put in place to deter investments in certain disaster-prone parts of the island. Enhancing nationwide early-warning systems with cutting-edge technology, raising awareness and engaging communities and systematically integrating these plans into national budgets would also be critical.

Such transformational change would not only require significant investments, but also courageous and visionary leaders, political will, skilled technical experts and an informed public to be on board. And there are many elements already working in the country’s favor. Tonga is relatively peaceful with a stable political system, high human development indicators and a number of strong national policies and strategies in place geared towards disaster readiness and long-term resilience.

However, the country faces the same hurdles as many other small island developing states, including limited human capacity and limited financing to efficiently carry out all its plans. Coordination gaps and changes in priorities can also affect implementation, as the IMF notes. That’s why continued international support and investments will be essential.

I’m keen to support these solutions, through my own personal investment and the possibility of moving back one day. Even on this very personal level, I have to weigh the risks of returning to a nation that is constantly reacting to disasters instead of proactively developing risk mitigation strategies. Anyone seeking to do business or live in Tonga will have to weigh the same risks.

The story of Tonga emerging from this disaster must therefore recount more than challenges and vulnerabilities to natural hazards. It should also be about resilience and hope, fueled by a vision of a forward-looking society that is disaster-ready, disaster-smart, self-sufficient and economically viable.

After all, our ancestors were extraordinary navigators who voyaged across thousands of kilometers of open ocean millennia ago, braving the most hostile conditions to establish a civilization in the heart of the Pacific. Those ancestors seeded a culture of faith, communal values and a pragmatic approach to crisis. It will not be easy, but with new knowledge, technology and international networks available, underpinned by the Tongans’ legendary resolve, it is possible. A resilient people deserve a resilient land. Let’s plan for that future.

*Editor’s Note (2/8/22): This sentence was edited after posting. It originally incorrectly referred to the 2021 World Risk Report as a United Nations Publication. It is a joint project of Ruhr University Bochum in Germany and Bündnis Entwicklung Hilft, a consortium of German development agencies.