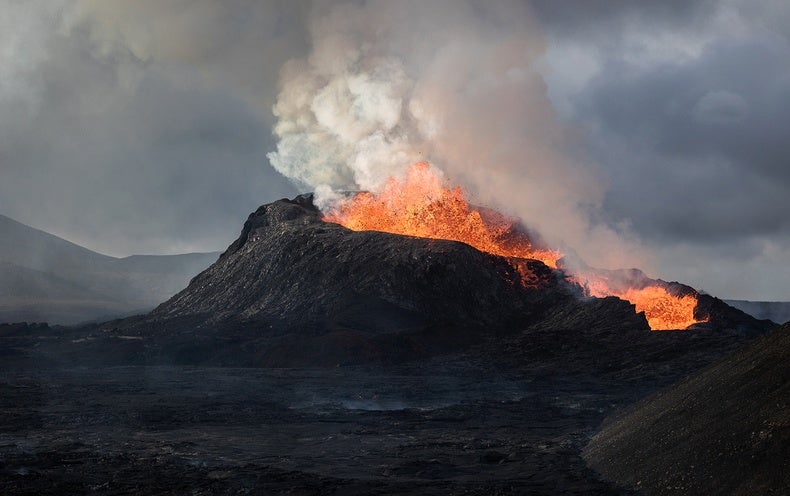 Breaking more than seven months of calm, the peninsula of Reykjanes in western Iceland has once again burst into volcanic flames. After a swarm of earthquakes in late July and early August rocked the area,lava burst forth from the Fagradalsfjall volcano into the valley of Meradalir—not far from the barely cooled lava from the same volcano’s 2021 eruption—treating tourists and researchers to the vibrant red-orange glow of fresh molten rock just 20 miles from Iceland’s capital of Reykjavk.

Such striking volcanic displays are relatively common in Iceland. The entire country, which is one of the geologically youngest landmasses in the world, is the product of millions of years of eruptions and is perfectly placed for ongoing volcanic activity.

Iceland straddles the boundary between two of the earth’s tectonic plates: enormous fragments of crust that fit together like puzzle pieces to form our planet’s rocky outer shell. The North American and Eurasian plates are pulling away from each other at a rate of one to two inchesper year, gradually unzipping the floor of the Atlantic Ocean to form a mid-ocean ridge. This divergence leaves a gap that draws up material from the earth’s mantle, a hot layer of rock sandwiched between the crust (the layer we live on) and our planet’s metal core.

As it rises, this material partially melts, supplying Icelandic volcanoes with magma, but this isn’t the only source of molten rock in the region. Iceland, like Hawaii, is perched above a “hotspot,” a column of hot rock that rises through the mantle, driven by its own buoyancy, which adds yet more fuel to the island’s volcanic fires.

In Iceland, this combination of magma sources expresses itself as several different kinds of volcanoes. The towering cone of Hekla in the south is closer to the mantle hotspot, whereas the strings of small craters and fissures now forming in Reykjanes’s volcanic systems are where the plate boundary comes onshore.

“The kind of volcanic eruptions that take place in this area [Reykjanes] are not originating from the typical cone-shaped mountain but more through openings in the crust,” says Sara Barsotti, coordinator for volcanic hazards at the Icelandic Meteorological Office (IMO). These openings occur because the area is located along a kink in the mid-ocean ridge, and the cracks form as a result of the two plates moving apart at an odd angle. Some of these cracks fill with magma, which can eventually erupt, whereas others allow chunks of crust to slide past one another, leading to earthquakes. Magma moving through the crust can also cause seismic activity as new cracks form or widen to accommodate the molten rock.

As the mid-ocean ridge spreads, Reykjanes cycles through quiet periods, typically lasting 800 to 1,000 years, followed by two or three centuries of spectacular eruptions, which scientists studying Iceland suspect could be starting now. During the 1990s, well before the Fagradalsfjall eruption began in 2021, geophysicist Sigrun Hreinsdóttir, now at the New Zealand geoscience research and consulting company GNS Science, Te Pū Ao, set up GPS stations throughout the peninsula to monitor the area’s slow shifting, bending and buckling, accompanied by small earthquakes. At the time, there were no active eruptions.

Looking back, though, Hreinsdóttir says, these measurements may have captured the first signs of new volcanic action in the region. “There was a lot of activity in [the mountain] Hengill, at the edge of Reykjanes Peninsula—lots of earthquakes,” she explains. All the action led scientists to suspect a magma chamber was filling up deep below the surface, and “we were wondering if that was kind of the first sign that Reykjanes might be close to coming alive.”

Now, it seems, the peninsula is truly waking up. Since the late 2000s, magma injected beneath the surface has caused the area to periodically inflate and deflate, bulging to accommodate the movements of molten rock underground. Barsotti and her colleagues at IMO track the locations of these reservoirs using earthquakes, GPS and satellite imagery to try to anticipate which parts of Reykjanes are most primed for future eruptions. The final warning sign was a cluster of large earthquakes that shook western Iceland before the first fissures opened in 2021.

After longing to see an eruption on every day of her fieldwork on the peninsula around 30 years ago, Hreinsdóttir could only watch her dream come true from afar, as COVID kept her home in New Zealand in 2021. This August, however, she went on a pilgrimage to lay her hands on the cooled lava from last year, and her six-year-old son was knocked off his feet by a magnitude 4.5 earthquake. This August 2 quake turned out to be a warning for an eruption on the very next day that would prove to be even bigger and more spectacular than the one she had missed. “It was quite a nice feeling for me,” she says. “It felt like Fagradalsfjall was just saying, ‘Hello!’”

On August 3, Hreinsdóttir hiked out to Meradalir with her colleagues from the University of Iceland, where she was previously affiliated, and some 1,800 other visitors to see the fluorescent orange glow of lava fountaining up from between the rocks of her former study area. Like in the 2021 Fagradalsfjall eruption, volcanologists expect new lava to keep emerging here for several months.

The eruption is already a hotspot for hikers and photographers. So far it is “pretty safe,” says Barsotti, who is monitoring the volcanic activity closely for potential hazards. “But I think we also need to know there is always uncertainty in what we can anticipate to be next.” The ongoing eruption is just an hour’s drive from Reykjavík, so IMO’s volcanologists are using data and models to assess current and future risks to infrastructure, water quality and human health caused by the lava and gases emanating from the new fissure.

Although the eruption itself presents some dangers to tourists, including noxious fumes and unimaginably hot molten rock, perhaps the greatest challenge facing those who want to see it is the two-hour hike to get there. “It is important to check on the IMO website for the conditions expected because we are going toward autumn—it might be very cold; it might be very windy,” Barsotti says. As a result, children age 12 and under and pets are prohibited from entering the eruption area.

Those that make it, though, are in for an enviable sight. “I’m jealous of myself, to be honest,” Hreinsdóttir says, although eruptions may occur as often as every few years now that Reykjanes has awakened from its roughly 800-year slumber. “How lucky was it that I was alive when this was happening?”