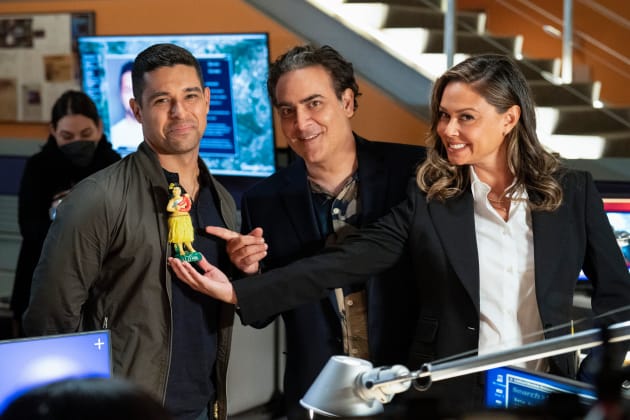 Following on from the thrilling NCIS Season 19 Episode 21 was challenging, but NCIS Season 20 Episode 1 was a formidable attempt to give fans a payoff and set up the crossover between NCIS: Hawai’i.

Truth be told, I found it difficult to connect with Parker when he first showed up on NCIS Season 19.

Making Gary Cole the lead in the aftermath of Mark Harmon’s exit was always going to be a bitter pill to swallow, but as the season continued, Parker came into his own.

The series was creatively in a good place, thanks to some significant shifts in the team’s dynamics.

With Parker in danger, it was nice to see how the team could come together to help someone they were so skeptical of initially.

Vivian sending messages to a mysterious individual was a successful way to make her look bad in the eyes of viewers, but now that we know the truth, it’s hard to understand her motives here.

Yes, on the one hand, she was helping Parker, but on the other, she didn’t need to lie.

Vance: This is a very dangerous game you are playing and that’s the last time I’m going to bend the truth to save your asses.
McGee: We can explain.
Vance: Save it. I appreciate you wanting to help Parker as much as I do, but deliberately poking the FBI hornet’s nest is no way to do it.
Knight: It’s crazy to think that Sweeney might actually listen to reason.
McGee: And give us more time.

Learning that she was trying to help her ex-husband evade the FBI was nice, but it wasn’t satisfying.

I get that the creatives wanted to leave a question mark over her allegiance over the summer, but it should have landed with more of a thud.

The best part is that Parker knew Vivian was up to something because it would be hard to believe an NCIS agent could be played that easily.

Viewers have certain expectations, and we expect these characters to be analytical because it’s probably a part of their job description.

Vivian scheming to keep Parker safe made way for the return of Fornell.

Vance: What about Parker. Do we actually know where he is right now?
Torres: No, sir. He’s been sticking to the game plan.

If you watch NCIS online, Fornell has helped the team through some of its biggest hurdles, but I didn’t expect him to have much of a presence after the departure of Gibbs.

It is good to check in with all these faces who have been a part of the franchise’s two-decade legacy.

Vivian being shot was a successful way to make Parker question his actions, and give the team the reason to kick this crossover with its Hawai’i counterpart into high gear.

My best guess is that Maxwell and his band of villains are making a beeline for the 50th state, allowing more members of the Hawaii team to join in on the fun.

Often, these big franchises that dominate TV screens set up crossovers that have little ramifications for each show taking part, but there’s so much at stake here as we head into NCIS: Hawai’i Season 2 Episode 1.

Knight: Jimmy and I have been doing just that for the past two days.
Torres: Mhm. Just that?

Maxwell successfully played everyone, including viewers. He was in prison for some very serious crimes, and he played up the part of this scared individual a little too well.

His grin to Parker was the best way for the other shoe to drop because I’m sure every viewer out there let out an audible gasp.

It was a well-executed reveal that not only allowed Parker some grace from the FBI, but gave him a reason to send his team after this criminal.

Parker would’ve been unable to forgive himself if Vivian was killed, and honestly, we don’t even know whether she’ll pull through.

Yes, the doctor is encouraged that she will pull through, but we don’t know what will happen next.

The series likes to keep viewers guessing, and it’s not like Vivian is integral to the plot, so we shouldn’t rule out losing her.

It would be interesting seeing how that would push Parker to the limit.

Jane and Ernie showing up was an excellent way to set up future events. Them being familiar with the people involved in the case creative connective tissue between these two shoes.

That being said, Ernie asking Kasie and Jimmy about Knight’s relationship status has got to be one of the corniest moments in NCIS history.

The intent was to give some fun to an otherwise darker hour, and who better to do that than these three characters, but it would have been a great moment for Jimmy to shut Ernie down from the jump.

Of course, Knight doesn’t want the whole office to know about their relationship, so I guess he had to think on the fly.

Workplace relationships are complicated, especially when you’re an NCIS agent.

The more likely scenario is that they’ll continue to keep this a secret, but Kasie strikes me as the type of person to accidentally reveal all about it to her peers.

“A Family Matter” was a decent start to the season, but the actual test will be in the coming episodes when we see what conflicts will be the driving force for the episodes ahead.

Over to you, NCIS Fanatics!

What did you think of that Maxwell betrayal? Did you suspect he was the Raven from the beginning?

Are you shipping Ernie and Knight or Jimmy and Knight?

Do you think Vivian needed to lie to Parker, or did it feel like unnecessary drama to you?