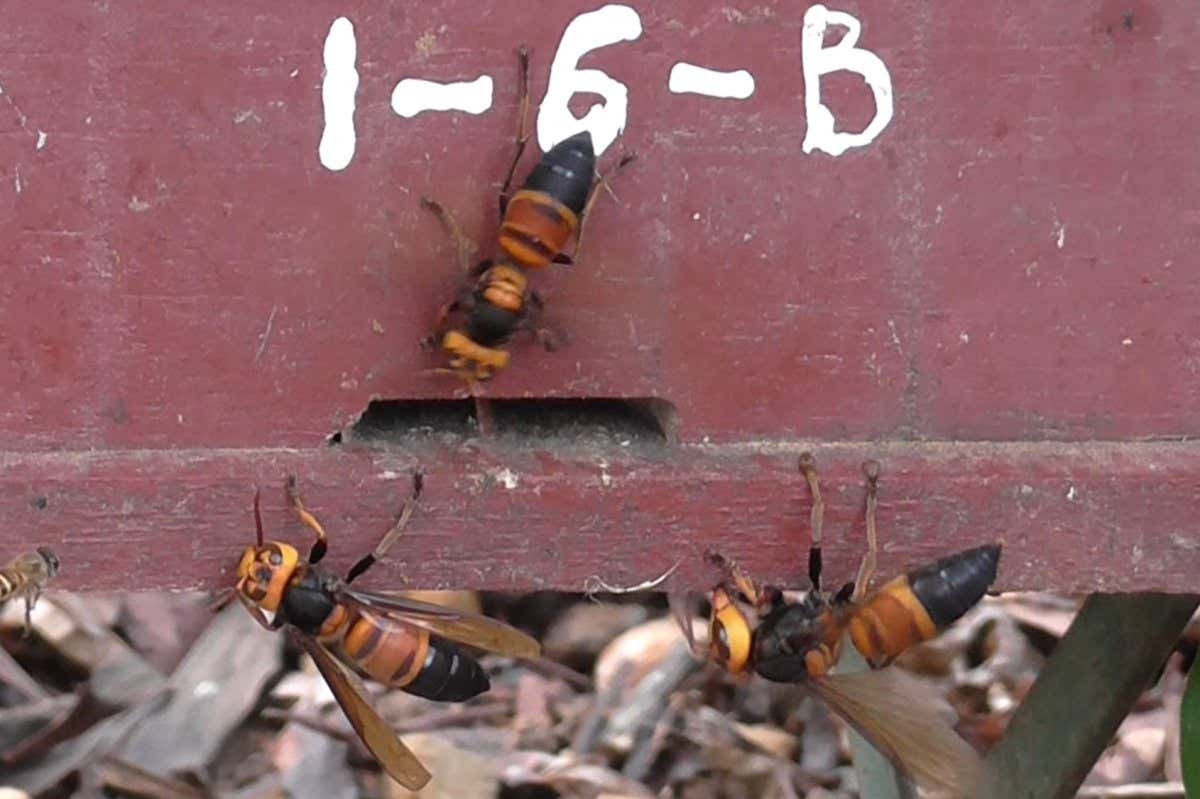 Asian honeybees scream in alarm when giant hornets attack the

A frenzied alarm signal produced by a type of Asian honeybee during a giant hornet attack has been identified for the first time.

Hornets are Asian honeybees’ most devastating predators and can wipe out entire colonies. Heather Mattila at Wellesley College in Massachusetts and her colleagues recorded sounds inside hives containing Asian honeybees (Apis cerana) as they came under attack either by a type of giant hornet (Vespa soror) related to the infamous “murder” hornet (Vespa mandarinia), or a smaller hornet species (Vespa velutina). The team also recorded sounds from the hives in the absence of predators.

In total, the researchers captured nearly 30,000 bee signals in more than 1300 minutes of recording, from three beekeeping yards in Hanoi, Vietnam.

By analysing pictures of the sound patterns, the team discovered that bees produce a previously undescribed set of harsh and irregular noises that can change rapidly in frequency when giant hornets, but not smaller hornets, arrive at the hive. They named these signals “antipredator pipes”. No such sounds were detected in the absence of threats.

“I found it really disturbing. When you analyse the recordings, part of you is scared for the bees, and part of you is so excited for how unusual these sounds were,” says Mattila.

The acoustic properties are very similar to alarm shrieks and fear screams made by other animals like primates and birds, says Mattila.

Using cameras to film the hive entrances, the team found that the antipredator pipes seemed to rally more bees to the hive entrance. Once here, the bees placed more animal dung around colony entrances, a behaviour known to deter hornets. The arrival of smaller hornets didn’t lead to increased dung-depositing by the bees.

The findings suggest antipredator pipes can convey particular types of threat to other bees in the colony, which “hear” the calls through vibrations in their legs, and help support predator-specific defences.

The team noticed that the bees raised their abdomens and buzzed their wings to make the antipredator pipes while running around in what appeared to be frantic paths.

In future, the team hopes to play back the alarm signals inside hives to better understand what information the bee screams convey and how individual bees respond.

“This study is of great value in that it scientifically demonstrated that honeybees have identified the attributes of their natural enemies and evolved acoustic alarm signals,” says Masato Ono at Tamagawa University in Japan. “It is also a very interesting convergent evolution to show that it shares points with the acoustic properties of mammalian horror.”

Sign up to Wild Wild Life, a free monthly newsletter celebrating the diversity and science of animals, plants and Earth’s other weird and wonderful inhabitants