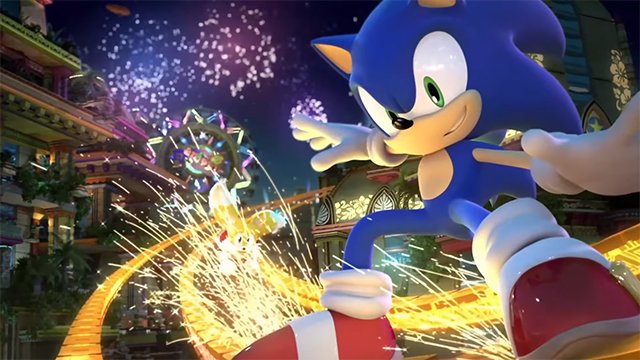 As part of its continued celebration of Sonic the Hedgehog‘s 30th anniversary, Sega is partnering with superstar EDM artist Steve Aoki to host a virtual concert. It will be available to check out on the Sonic the Hedgehog YouTube and Twitch channels on November 30, 2021 at noon PT.

Aoki spoke in a video posted by the official Sonic YouTube page about how he was a big fan of Sonic growing up and that this concert falls on his 44th birthday. This video contained a behind-the-scenes look at the collaboration between both parties and how Aoki plans to do his unique virtual concert.

The show will take place on a digitally created environment that aims to recreate the Sonic universe. Various stages from the original games, including Green Hill Zone, Chemical Plant, and more will be reconstructed digitally and will complement the remixed versions of Sonic‘s biggest songs from Aoki’s set. However, the video didn’t contain any sneak peeks at what the virtual world will look like in action as it was mostly just green screens.

The news of the concert continues the celebration of Sonic’s anniversary that Sega has been holding all year. Earlier this year, Sega partnered up with Minecraft to release a new Sonic DLC pack into the game to celebrate the anniversary. And Sonic recently also got some branded cologne in his name as a part of a partnership with Numskull Designs.

RELATED: Yakuza, Shenmue, and Sonic the Hedgehog Get Colognes From Sega

Bellamy Young Shares Why ‘A Waltons Thanksgiving’ Is a New

The Biggest Differences Between Hulu’s Tell Me Lies and the

Sunshine Duo Books for Fans of Wednesday and Enid

The Race to Save Sam Bankman-Fried’s Other Crypto Exchange