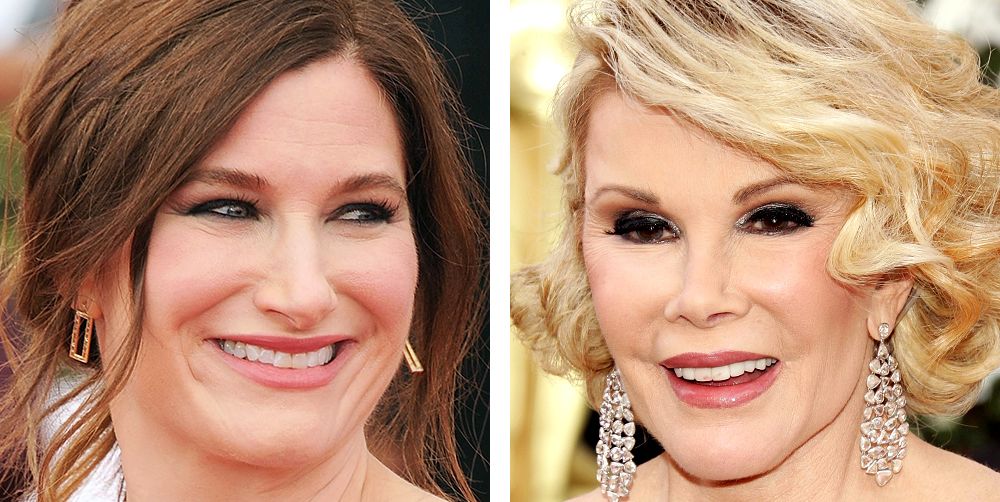 Producers hadn’t secured Rivers’ life rights, which are held by her daughter Melissa Rivers. Per Variety, “The project could have proceeded as an unauthorized venture, but ‘The Comeback Girl’ wouldn’t have been able to use any of Rivers’ jokes or catchphrases, and, of course, risked running afoul of Melissa Rivers and the estate.”

Original story: Following her Emmy nomination for WandaVision, Kathryn Hahn has been tapped to portray Joan Rivers in a new limited series for Showtime, Variety reports. She’ll also co-executive produce the project, titled The Comeback Girl, which focuses on a trying period in Rivers’ life: after the cancellation of The Tonight Show (on which she was a frequent guest host) and her husband Edgar Rosenberg’s death by suicide.

The series will be directed by Greg Berlanti (Love, Simon) and written by Cosmo Carlson (Time Lost). Both will join Hahn as executive producers. Variety also shared a logline for the production:

“Trailblazer. Adored. Cruel. Diva. Joan Rivers had a life like no other. At age 54, she was a superstar comedienne…and then it all fell apart. The Comeback Girl is the awe-inspiring untold story of how Joan Rivers persevered through near suicide and professional abyss to rebuild herself and her career to become a global icon.”

Rivers, known for her sharp humor, passed away in 2014 at the age of 81. She was a trailblazing stand-up comic, who broke through in the 1960s New York comedy scene. After a falling out with The Tonight Show‘s Johnny Carson in ’86, she started the The Late Show Starring Joan Rivers, becoming the first woman to host a late-night program. In the decades following, she carved out an expansive television career with highlights including The Joan Rivers Show and, later, The Fashion Police.

The Comeback Girl is just one of many projects Hahn has in the works, in addition to Apple TV+’s The Shrink Next Door and Rian Johnson’s long-awaited Knives Out 2. And, although nothing’s confirmed yet, WandaVision fans are still holding out for the return of her character, Agatha Harkness. “It would be fun to see what universe she could pop up in,” Hahn told Harper’s BAZAAR this summer, but further updates from Marvel have so far been slim. “They are so tight-lipped, who knows?”

In the meantime, we’ll just add The Comeback Girl to our ever-growing list of Hahn’s must-watch upcoming roles.

Erica Gonzales Erica Gonzales is the Senior Culture Editor at ELLE.com, where she oversees coverage on TV, movies, music, books, and more.