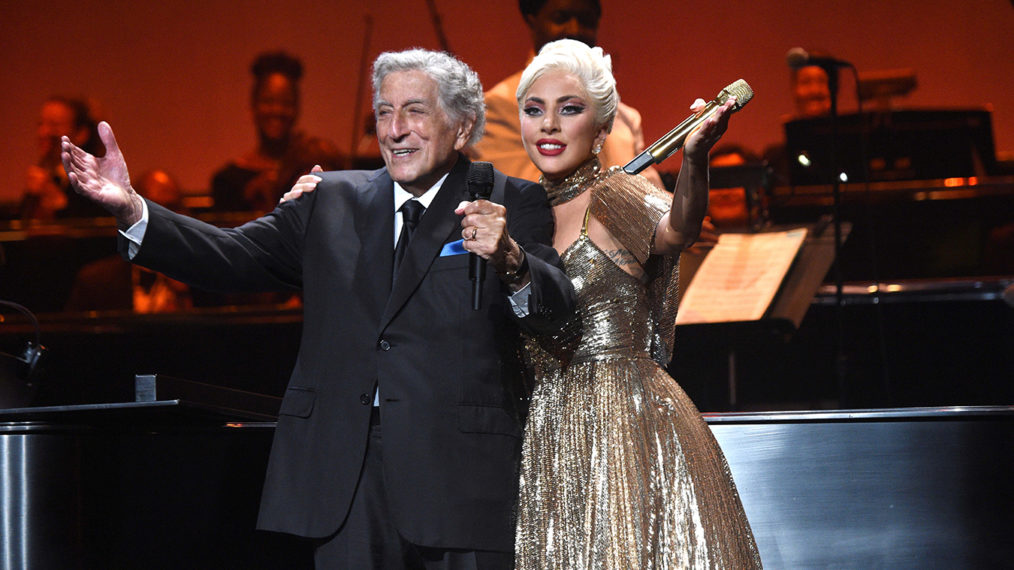 Tony Bennett with Lady Gaga ‘One Last Time,’ ‘Waltons’ and Tony Bennett wows them one last time in a farewell concert alongside Lady Gaga. A new cast revives The Waltons in a 50th-anniversary Homecoming movie. Don Johnson and Cheech Marin reprise their roles in a Nash Bridges movie. A new Hot Zone limited series revisits the post-9/11 panic of an anthrax bioterror scare. A lavish trivia contest marks the 20th anniversary of the first Harry Potter film. A shattering episode of HBO’s Succession plays out at Kendall’s 40th birthday bash. One Last Time: An Evening With Tony Bennett and Lady Gaga

SUNDAY: In a memorable recent 60 Minutes report, fans of the legendary crooner Tony Bennett were amazed and moved to see the entertainer, now lost in an Alzheimer’s fog, snap back to his former self when responding to music. This allowed him to celebrate his 95th birthday in August by performing a farewell concert to two sold-out houses at Radio City Music Hall alongside his favorite partner of late, Lady Gaga. An hour special presents highlights of the concert, with Bennett belting out his signature songs, including “I Left My Heart in San Francisco,” and teaming with Lady Gaga on such standards as “The Lady Is a Tramp” and “Anything Goes.” This is not to be missed. SUNDAY: A half-century ago, a TV classic was born when CBS broadcast The Homecoming: A Christmas Story, from which The Waltons was launched in 1972, introducing audiences to a rural Depression-era family that got by with hard work and love. Richard Thomas, the original John-Boy, returns as narrator of the film’s remake, with a new cast led by Scandal’s Bellamy Young as Olivia Walton and This Is Us star Logan Shroyer as eldest son John-Boy, who steps up to keep spirits high among his five siblings (the character of Ben was omitted for this version) while anxiously waiting for papa John (Ben Lawson) to make it home for the holiday during a blizzard. SUNDAY: Another dose of TV nostalgia in a movie revival of the light-action cop show, 20 years after CBS ended its six-season run. Don Johnson is back as the elite detective in the San Francisco Police Department’s Special Investigations Unit, still burning up those hilly city streets in his yellow ’Cuda convertible with sidekick Joe Dominguez (Cheech Marin) for support. After they’re suspended, the movie jumps ahead a year with Nash now a part-time bounty hunter and Joe managing a legal marijuana dispensary. But maybe not for long. Hopes are high for some sort of reboot. SUNDAY: In what feels like the longest-ever episode of FBI (the series continues Monday and Tuesday), a limited-series docudrama depicts the dogged investigation by FBI agents—led by Hawaii Five-0’s Daniel Dae Kim as Matthew Ryker—when deadly anthrax-laced letters are sent to media outlets in the tense weeks after the 9/11 attacks in 2001. Scandal’s Tony Goldwyn steals the show as antic microbiologist and government anthrax expert Dr. Bruce Ivins, who sees himself as the hero of this story, but his mania and paranoia hint at a much darker side. SUNDAY: The grand Helen Mirren presides over a lavishly tricked-out four-week trivia event marking the 20th anniversary of the release of Harry Potter and the Sorcerer’s Stone. Match your knowledge with teams bearing the names of the four houses of Hogwarts: Gryffindor, Slytherin, Hufflepuff and Ravenclaw. And don’t be surprised if a few familiar faces drop by to share in the magic. SUNDAY: In one of the most devastating episodes to date—and that’s saying something—Kendall (Emmy winner Jeremy Strong) throws himself an outrageously over-the-top 40th-birthday party. The rest of the Roy family isn’t in a particularly celebratory mood, and his sibs Shiv (Sarah Snook) and Roman (Kieran Culkin) don’t even consider “The Notorious Ken” the guest of honor. They only have eyes for Lukas Mattson (HBO fixture Alexander Skarsgård, of True Blood and Big Little Lies fame), a tech mogul who could take their company into the future if only they could woo him to their side. But first they’ll have to worm their way into the VIP section. No love lost amid this kin.