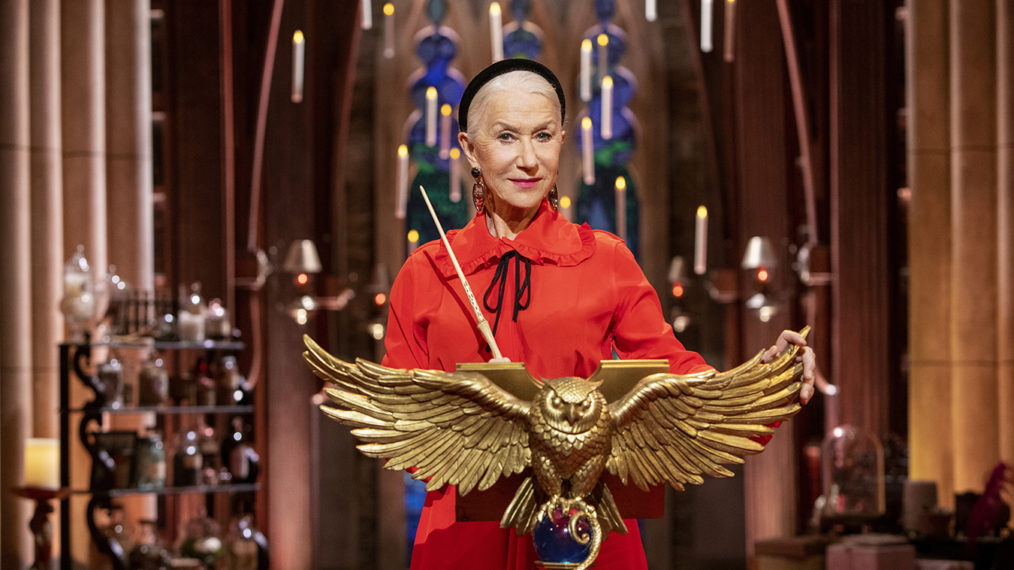 Helen Mirren Gets Into ‘Harry Potter’ Spirit for ‘Hogwarts’ Competition Accio remote! The 20th anniversary of the big-screen Harry Potterand the Sorcerer’s Stone arrives with a four-week trivia event, Harry Potter: Hogwarts Tournament of Houses, hosted by Helen Mirren, a fan herself. Teams designated by the four houses at the Hogwarts School of Witchcraft and Wizardry — Gryffindor, Slytherin, Hufflepuff, and Ravenclaw — test their knowledge of the books and films over four rounds to win a House Cup-style trophy (among other prizes). Keep an eye out for… “We flew a plane over [to Los Angeles] that was packed full of real props,” says executive producer Robin Ashbrook. With objects such as floating candles, the Sorting Hat, Tom Riddle’s diary — even Hagrid’s oven gloves! — scattered about the set, “It’s like a living, breathing Harry Potter museum.”

Tom Felton (Draco Malfoy), Matthew Lewis (Neville Longbottom), and other cast members pop in. And in a round called “The Last Word,” Jay Leno and SNL’s Pete Davidson read book passages minus one word; players must fill in the blank.

On top of Mirren and the contestants’ fantastic entrances through a fireplace (via Floo powder?), letters from Hogwarts fly through the air, surrounding her as in the first movie’s iconic scene. Mirren shot the stunt without practice, Ashbrook says. “She really got into the spirit of it.”