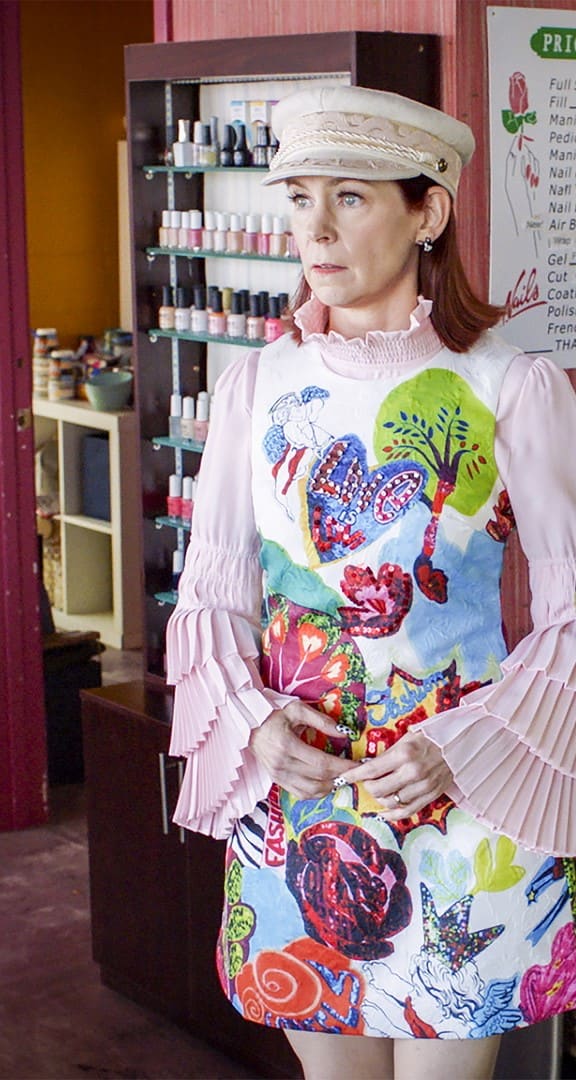 Well, things are finally starting to wrap up now, aren’t they?

Desna and her crew were squarely in the sights of the DEA thanks to undercover agent Tony. But wild card Bryce changed things dramatically on Claws Season 4 Episode 9.

Is it any wonder that Uncle Daddy chose a fetus as his heir instead of the unpredictable Bryce?

The linear-thinking Bryce decided that Tony was a threat to his marriage to Jenn just because he caught the two of them talking.

Of course, Desna, a more profound thinker, jumped to the same conclusion that Jenn and Tony were having an affair. So that’s not entirely on Bryce.

Some of the blame lands on Jenn and her newly minted oxy addiction. Losing her girls and how Des treated her had left Jenn spinning, and much of that fallout landed on Bryce.

Still, the abuse Bryce had gotten from Uncle Daddy and Jenn didn’t give him license to take Tony at gunpoint and threaten him. That was just plain dumb. But it is the Husser way.

And, Bryce, learn where the safety is on your gun. That way, you wouldn’t accidentally shoot Tony when you receive bad news in a text from Jenn.

Bryce’s next stupid move was to seek help from Clay, from whom he has been estranged after he crossed over to Desna’s crew.

Needless to say, Uncle Daddy, whose criminal career has been circling the drain, wasn’t receptive to Bryce’s plight.

So next, Bryce babbled a plea to his current boss, Des. Bryce’s shooting Tony was the answer to her prayers, should she handle it properly.

That, however, was the catch. The girlfriend would be a prime suspect, as would the suspect of a DEA agent’s investigation. That was Desna in both cases.

The second problem was that Clay knew about the shooting, although that wasn’t at the forefront of his addled mind.

Then, in addition to covering up Tony’s murder, Desna also had to bring her fractured crew together for one last stand since the killing of a DEA agent would increase the scrutiny on them.

It must be said that Lori and the suit who was her boss didn’t seem nearly as ominous as Tony, the snake in their midst. But they won’t take the murder of one of their own lightly.

After Jenn and Virginia made up on Claws Season 4 Episode 8, the pair had decided to go their way, away from Densa.

This new path led them to an AA meeting, where Jenn was busy confessing some of her many sins. This purging led her to denounce all the deadly toxins in her life: alcohol, drugs, the wrong people (including Desna and Bryce).

That sounded simple enough. But it would have been easier if Jenn and Virginia hadn’t been staying at Polly’s house. That made it much easier for Polly to find them as Desna had commanded.

Virginia folded and instantly came back in the fold, the follower that she is. Jenn’s resolve weakened quickly, although she persisted in thinking that rejoining the crew was temporary.

That left one major obstacle: Uncle Daddy, who also knew about the murder. Desna got the others, including Bryce, to see the practicality of pinning the killing on him.

Fortunately for them, Clay was in a forgiving mood thanks to Quiet Ann’s return to his crew. Little did he know that she was doing that at the behest of the DEA.

Uncle Daddy was receptive when Bryce told him that he wanted to return to the family business to get the gang back together.

Bryce’s job was to keep Clay busy while Desna planted the murder weapon in the nursery. Bryce failed at that as well as Uncle Daddy discovered Desna as he was heading to the bathroom after too many shots.

This opportunity was just what Clay wanted: his latest mortal enemy dead in his sights.

Desna attempted to bullshit him about calling in a tip to the police that he was the murderer. His response was to have her call and confess instead.

That was when Uncle Daddy put everything together and determined that Bryce continued to betray him. He shot and wounded the braying Bryce, then Desna shot him dead right in his big, bald head.

So that’s two killings tied to the gun that Desna was holding, with the second one the man she had planned to frame for Tony’s murder. How does she get out from under that?

There was never any doubt that Uncle Daddy would come out of this alive. His behavior has become more bizarre, the latest being his taking advice from his dead wife, Juanda.

It’s a shame because Clay was the most colorful character on Claws. But his death was also inevitable. Didn’t you love his warped Cirque Soleil version of the afterlife, complete with Juanda and Toby?

Other supporting characters are getting set up for their happy ending. Dean and Eve broke the news to Desna about their shocking pregnancy.

After freeing Selena, Ken continued to look for his soul mate. He tried to interest Gretchen again, with no luck.

Then he chatted with recent widow Polly, who was too distracted to listen much. Want to bet they end up together?

Can everyone get out from under an investigation once again in the finale? Or will someone end up taking the fall?

To revisit Desna’s crew’s ups and down, watch Claws online.

What do you want from the finale?

Did Uncle Daddy go out as you expected?

Can Desna escape one more time?