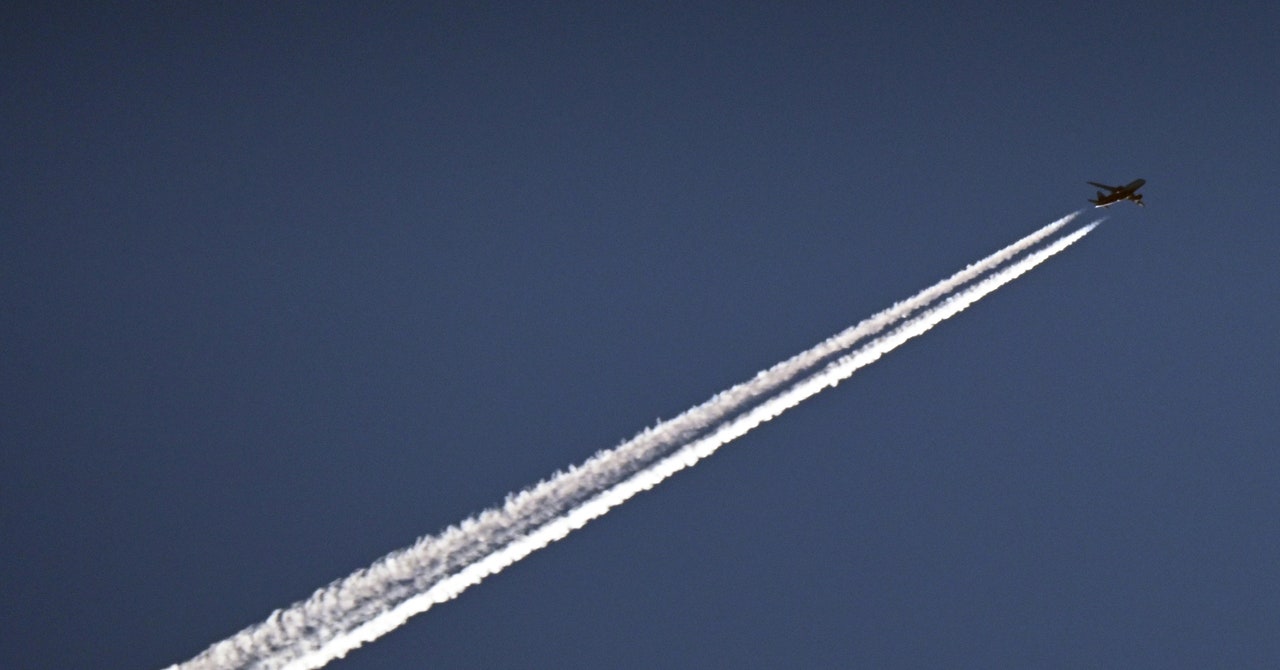 Jet A-1, a straw-colored, kerosene-based fuel used in most big airplanes, is a difficult substance to replace. It’s packed with energy; per unit of weight, at least 60 times as much as the lithium-ion batteries used to propel electric cars. It’s also terrible for the climate. So as the aviation industry has gradually climbed aboard global pledges to get rid of carbon emissions, it has mostly promised to make up for its damage elsewhere—through offsets that might involve planting trees, restoring wetlands, or paying people to preserve ecosystems that otherwise would have been razed. But according to a growing body of research, those efforts leave something out: Most of the planet-warming effects of flying aren’t from carbon dioxide.

Burning jet fuel at 35,000 feet sparks a molecular cascade in the troposphere. The initial combustion releases a shower of particles—sulfur, nitrogen oxides, soot, and water vapor. At those frigid heights, some of the particles become nuclei around which condensation gathers and then quickly freezes, helping to produce puffy contrails that either vanish or persist as wispy, high-altitude cirrus clouds. In the presence of the sun’s rays, nitrogen molecules set of a chain of reactions that produce ozone and destroy free-floating atmospheric methane. It’s tough to pin down the meaning of all this chemistry. Some of these reactions, like the methane destruction, help cool the Earth. Others warm it. It all depends on the atmospheric conditions for each flight, multiplied across tens of thousands of planes streaking across the sky each day.

Overall, the warming effects add up. In an analysis published last year, an international team of researchers pinned 3.5 percent of total warming in 2011 on aviation alone—which may sound small, but the number has been growing fast. The authors found that roughly two-thirds of warming due to aviation at that time was caused by all of those factors that aren’t CO2 emissions.

Which is why some scientists argue that the term “carbon-neutral” doesn’t mean much, at least when it comes to flying jets. If the aviation industry wants to do its part to help meet global temperature goals, it’s better yet to think in terms of “climate-neutral,” says Nicoletta Brazzola, a climate policy researcher at ETH Zurich. In a study published this week in Nature Climate Change, she outlines all the ways to get there, including rules for more efficient flying, new technologies like low-carbon fuels and batteries, and more intensive efforts to remove carbon from the air that would go beyond canceling out aviation’s CO2 emissions, accounting for all of the industry’s warming effects. And, oh yeah: less flying. “It would require an enormous effort to meet this climate-neutrality framework solely with technology fixes and no changes to lifestyle,” she says.

So far, the industry’s focus has been on offsetting carbon. It’s the greenhouse gas we all know, and it’s easy enough to measure how burning jet fuel converts into tons of carbon emissions. That’s based on intimate knowledge of existing fuels and engines. Airlines already make those calculations and let customers see their damage—and often pay a little extra to offset those emissions through partner programs that do things like plant trees. Expecting continued growth in demand for aviation, members of the International Civil Aviation Organization (ICAO) have pledged to hold their net carbon emissions to 2019 levels through those types of offsets. That effort itself is far from perfect—a number of investigations have found that many of the offset programs that airlines partner with chronically overestimate the amount of carbon that they successfully store. And again, those schemes are all about carbon.

In part, that’s because it’s tricky to account for all the non-CO2 factors. Atmospheric chemistry at 35,000 feet is inherently localized, dependent on factors like temperature and humidity. The greatest uncertainty is the potential behavior of contrails—the tendrils that form behind planes as water molecules condense around exhaust particles and freeze. “The basic microphysics of the ice crystals is quite difficult to get a handle on,” says David Lee, an atmospheric scientist at Manchester Metropolitan University who studies aviation emissions. If the air is humid and cool enough, they can hang around as cirrus clouds, and that would likely have a net warming effect. The time of day is another X factor. During the day, those clouds can reflect sunlight, keeping the Earth cool. But they can also trap heat, especially at night.