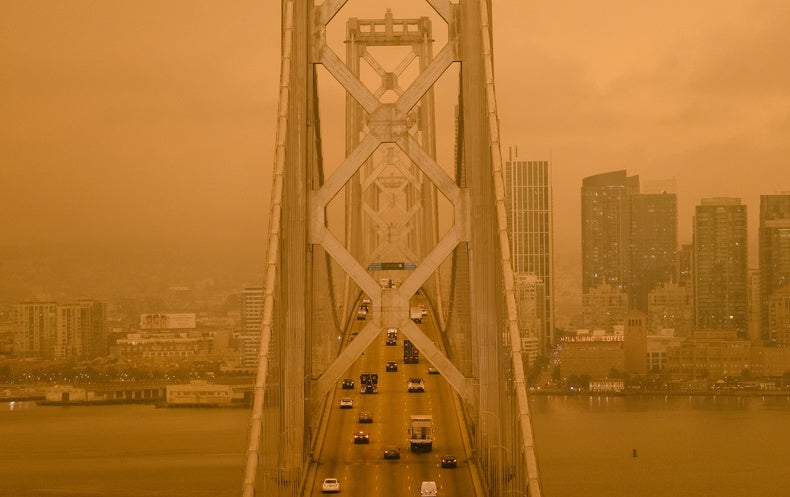 Wildfires Are Fueling a Toxic Combo of Air Pollutants

Unseen dangers accompanied deadly flames in the record-breaking wildfire season that raged across the U.S. West in 2020.

In addition to the millions of acres burned by the blazes, the thousands of structures they destroyed and the dozens of people they killed, the 2020 fires brought some of the worst air quality conditions ever observed across the region.

A dangerous combination of both fine particulate matter and toxic surface-level ozone—both forms of air pollution that can be produced or worsened by wildfires—built up in the air and spread across the Western states. Studies suggest that the population exposure to these combined pollutants was the highest observed since scientists started keeping tabs on them 20 years ago.

As the fires peaked on Aug. 21, 2020, scientists estimated that a record-breaking 46 million people—half the population of the western U.S.—were exposed to dangerous combinations of ozone and particulate matter pollution.

Both ground-level ozone, a major ingredient in smog, and particulate matter, or tiny pollution particles like soot from smoke, are hazardous to human health. They can irritate the airways, damage the lungs and make people more vulnerable to other dangerous health conditions like asthma, heart disease or lung disease.

When the pollutants are combined, scientists believe they have even worse effects on human health.

That’s bad news in a world where wildfires are growing more severe. The pollution in 2020 was an extreme case, but it’s hardly an isolated event.

New research finds that dangerous combinations of ozone and fine particulate pollution are increasing across the western U.S. And they’re likely being fueled by a rise in hot, dry weather conditions and stronger wildfire activity.

It found that events involving dangerous combinations of both ozone and fine particulate matter have increased in every way over the last 20 years.

These incidents seem to be linked to certain kinds of weather conditions.

Long-lasting high-pressure systems, known as atmospheric ridges, can increase the odds of hot, dry weather conditions across the western U.S. These kinds of hot, stagnant conditions are known to increase ground-level ozone pollution by encouraging chemical reactions in the air that produce ozone.

The researchers found that there’s an increased risk of combined ozone and particulate matter pollution during atmospheric ridging events. They also found that these weather conditions are happening more often and lasting longer.

Compared to the 1970s, when scientists first started monitoring these events by satellite, these weather events are happening for an additional two weeks every year. And the longest-lasting events are persisting for an extra four days at a time.

The new study doesn’t delve into why atmospheric ridging is happening more often, but some research suggests climate change is part of the reason. Climate change is also driving temperatures higher across the western U.S., making these events more severe.

At the same time, wildfire activity is also increasing across the western U.S.

The result—more combined air pollution events—is a big concern for human health. The study suggests that the population exposed to these events has dramatically increased over the last 20 years. It’s grown by about 25 million “person-days”—that’s a scientific metric equal to the number of people multiplied by the number of days they’re exposed.

The study highlights the cascading effects of climate change in the western U.S. The region is getting hotter and drier, which leads to more wildfires. More wildfires produce more air pollution. More air pollution means greater risks to human health.

And these risks are only going to grow as the region continues to warm up. Scientists expect heat waves to grow more intense and wildfires to grow more severe across the West in coming years.

The severity of recent wildfire seasons has “raised significant concerns regarding the trajectory of air quality in the region,” the study’s authors write. “Historical and projected climate and wildfire trends in the western US both point toward increasing risk of exposure to poor air quality.”