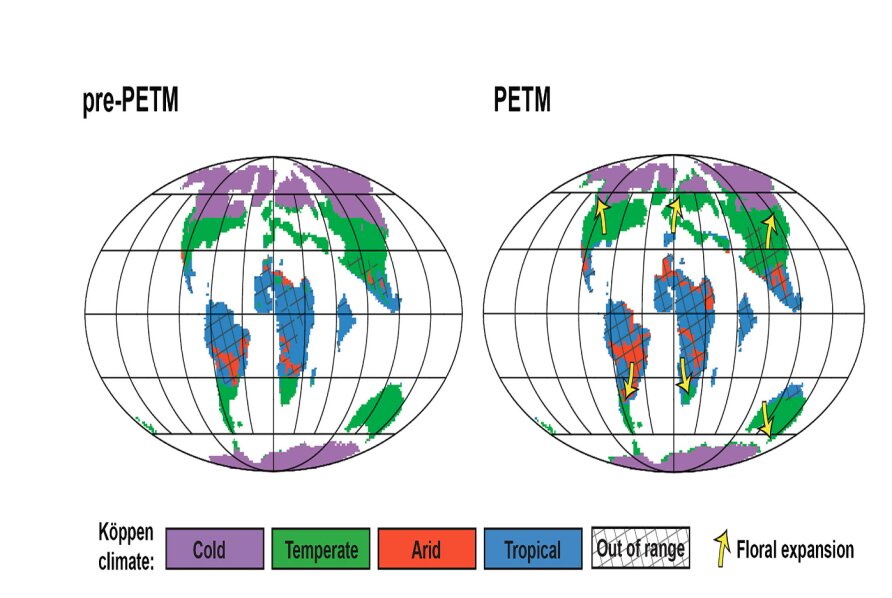 Changes in plant ranges from the pre-PETM to PETM mapped on simplified Köppen climate types. Credit: University of Melbourne

Around 56 million years ago, Earth’s climate underwent a major climatic transition. A huge release of carbon into the ocean and atmosphere raised atmospheric carbon dioxide (CO2) concentrations—which meant temperatures going up by 5 to 8°C and rising sea levels.

This event, called the Paleocene–Eocene Thermal Maximum (PETM), happened over the course of a few tens of thousands of years, but the causes and consequences of this transition are still widely debated.

Some of the hypothesized causes of the huge carbon release include massive volcanic activity in the North Atlantic, the sudden release of methane from the ocean floor or the melting of permafrost or peat in Antarctica.

Evidence for the PETM comes mostly from ancient marine sediments, but if we are to learn from this period what might happen as a result of our current climate change crisis, we need to understand what happened on the land as well.

To date, little information has been available concerning how the PETM climate changed life on land, so our research team used globally distributed fossil pollen preserved in ancient rocks to reconstruct how terrestrial vegetation and climate changed across this period.

Our new research, led by myself and Dr. Scott Wing at the Department of Paleobiology at the Smithsonian’s National Museum of Natural History and published in the journal Paleoceanography and Paleoclimatology, demonstrates that an increase in the concentration of atmospheric CO2 played a major role in shifting Earth’s climate and plant life.

We could see a similar increase in the coming centuries as a result of anthropogenic (that is caused by humans) increases in CO2.

To understand how terrestrial vegetation changed and moved during this period, we used a recently developed approach based on fossil pollen preserved in ancient rock deposits. It uses the distinct, species-specific appearance of pollen grains observed using a microscope.

The distinct appearance of pollen evolved to assist with pollination strategies employed by plants. Because each species has unique pollen, it means we can compare fossil pollen with modern pollen to find a match—as long as the plant family hasn’t gone extinct.

As a result, fossil pollen can be confidently assigned to numerous modern plant families. Each of these modern plants have specific climatic requirements, and we make the assumption that their ancient relatives needed a similar climate.

To give more confidence to this assumption, we avoided data from plant groups that we knew had evolved after the PETM, as these species may not have settled into the same climate preference that they have today.

Pollen preserved in rocks for tens of millions of years allows us to reconstruct both ancient floral communities, and past climates.

These shifts in floral composition, due to massive plant migrations, indicate that changes in vegetation as a result of climate change were global, although the types of plants involved varied by region.

When we say plant migration we mean plant movement, as the seeds that are spread grow better in one place and climate than in another—in this case at higher, cooler latitudes over lower, warmer ones.

Plants can migrate over 500 meters each year, so over thousands of years, they can move huge distances.

We assigned each species a category based on climate, called a Köppen climate type. Examples of this include tropical rainforest, arid desert, temperate hot summer and polar tundra.

This tells us that the PETM brought warmer and wetter climates towards the poles in both hemispheres, but warmer and more seasonally dry climates to the mid-latitudes.

To explore the geographic extent of these shifts, we worked with Dr. Christine Shields from the US National Centre for Atmospheric Research and Dr. Jeffrey Kiehl at the University of California to run climate model simulations.

The data used to create these simulations was derived from Community Earth System Model (version CESM1.2).

So, if our current CO2 levels continue to rise, warming and melting permafrost which could release more stored carbon to the atmosphere as it may have done 56 million years ago, we will once again see these mass shifts in vegetation in response to dramatic changes in local climate conditions.

How well the vegetation is able to migrate will depend on many factors, including the speed of climate change and the availability of suitable migration areas for these plants.

Where the plants go, so too will the animals that rely on them (if they can)—perhaps in some cases humans included.

Understanding this massive shift on our planet that came as a result of a warming climate gives us an insight into our potential future. Are we prepared to physically move from our homes, like these ancient forests did, to adapt to climate change or can we work together now to avoid the adverse consequences of a warming world?

Citation: What ancient pollen tells us about future climate change (2022, May 6) retrieved 24 May 2022 from https://phys.org/news/2022-05-ancient-pollen-future-climate.html