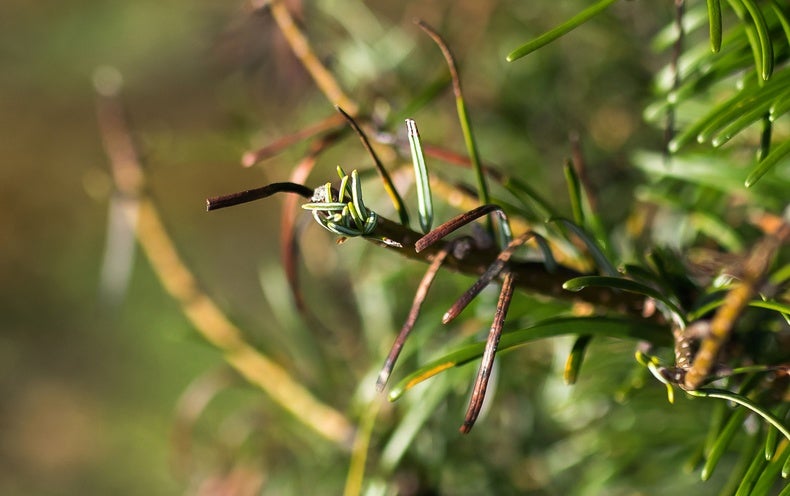 Tweaks to U.S. Christmas Trees Could Help Them Survive Climate

Mounting pressure from extreme weather events and lethal diseases—both exacerbated by climate change—threatens to assail U.S. Christmas tree–growing regions and slash production. To help defend these cherished trees and the farms that raise them, researchers are mapping conifer genomes and exploiting the natural characteristics of species that grow outside the U.S. to identify and breed hardier evergreens.

“In agriculture, you’re not doing what you were doing 30 years ago,” says Gary Chastagner, a plant pathologist and Christmas tree expert at Washington State University. “It’s an ever-changing thing.”

Most U.S.-produced Christmas trees are grown and shipped from two regions. In the East, the Blue Ridge Mountains of western North Carolina yield the most trees. These cold peaks are home to the prized Fraser fir, a high-elevation species known for its strong branches, ideal conical shape and superior ability to retain its needles after being cut down. Meanwhile, the Pacific Northwest produces the largest numbers of Christmas trees overall, with Oregon leading the nation. The Cascade Range’s cool and damp western flanks offer ideal growing conditions for conifers, such as the stiff-branched noble fir and densely needled Douglas fir, two of the country’s most popular Christmas tree species.

This June a record-breaking heat wave scorched the Pacific Northwest, with temperatures soaring past 99 degrees Fahrenheit for four consecutive days. This hit Christmas tree farms hard, killing many younger trees and singing the needles of older ones. “We lost probably close to 60 percent of our seedlings,” says Bob Schaefer, CEO of Oregon-based Noble Mountain Tree Farm. One of the country’s largest such operations, it typically produces more than half a million evergreens a year.

To recoup losses, Schaefer and his colleagues plan to plant more seedlings in the spring and delay harvesting of damaged, older trees, giving them a couple years to recover. Though Schaefer is confident this will mitigate losses from the June heat wave, he notes that not all growers can afford to replant many seedlings or delay harvesting full-grown trees—and that the heat all but wiped out some smaller growers. And if devastating weather events become more frequent, as some climate scientists expect, larger-scale growers may increasingly find themselves struggling to cope.

This summer’s  Pacific Northwest heat wave was a once-in-1,000-years event that would have been “virtually impossible without human-caused climate change,” according to a report published earlier this year by an international consortium of scientists. If global carbon emission levels continue as they have, the team concluded, by the 2040s such extreme heat events could hit the region every five to 10 years—roughly the time it takes to grow a Christmas tree.

Extreme heat is not the only problem growers face. Most Christmas tree farms rely on natural precipitation rather than irrigation; thus young seedlings, which lack the extensive root systems that help older trees reach deep groundwater stores during dry periods, are particularly vulnerable. But if too much rain saturates the soil, conditions are ripe for the spread of lethal disease. When pore spaces in soils fill with water, they open up navigable channels for the fungal spores of a water mold called Phytophthora. These passages let the spores suddenly swim through soil and attack trees’ root systems. There is no effective treatment; afflicted trees wilt and die.

Phytophthora root rot is the most devastating infection Christmas trees face. Each year it causes North Carolina growers to lose an estimated $6 million to $7 million in trees. Scientists are now predicting warmer temperatures, and more frequent intense rainfall events, if climate change goes unchecked. This means Phytophthora, which thrive under warm and wet conditions, will likely develop into a bigger problem in the future, Chastagner says.

To address such challenges, scientists are studying conifer genomes in the hopes of developing trees with greater resilience to disease or climate change. Marker-assisted breeding—which involves selecting for specific genetic landmarks associated with desirable traits—could help researchers quickly handpick and breed trees with characteristics such as drought resilience (such traits are more difficult and time-consuming to detect using more conventional methods). Christmas tree cultivators also might one day be able to use markers to select for faster growth, longer needle retention, or needles that are unappetizing to deer.

But locating these markers is no easy task in light of the sheer size of conifer genomes, says Jill Wegryzn, a computational biologist at the University of Connecticut. “They’re about eight times the size of the human genome,” she says. Researchers are probably more than five years away from being able to use genetic markers to help growers produce better trees, Wegryzn adds. After mapping the genetic makeup, scientists will still need to investigate which genes are activated to make proteins.

Additionally, some botanists are looking into naturally acquired climate and disease resilience in non-U.S. Christmas tree species. Scientists have found that species including the Nordmann fir (the most popular Tannenbaum in Europe), Turkey’s aptly named Turkish fir, and Japan’s momi fir possess greater natural resistance to Phytophthora than domestic species such as the Fraser or noble fir. Trials are underway to verify similar resistance in Trojan firs, another Turkish species. Some of these species are also more resistant to insects and pests, and more tolerant to warmer climates and drought, Chastagner says.

Certain botanical tweaks could make these international species more attractive to U.S. consumers. Chastagner and his colleagues are gathering branches from trees as young as two years old, and testing thousands together to identify those that retain the most moisture and drop fewer needles after harvesting. The results will help U.S. growers accelerate the development of overseas trees with better post-harvest needle retention.

Growers are eager to take advantage of this research. Native species like the Fraser fir and noble fir still reign supreme on the U.S. market, but species from other parts of the world are becoming increasingly popular with growers here, Chastagner says. Many farmers across the country, including Schaefer, are already cultivating and selling Nordmann firs. “And right now there’s a tremendous increase in Turkish fir production,” Chastagner says.

Non-U.S. species are unlikely to wholly replace the most popular native species, he says. Still, these alternatives offer growers more options for coping with climate change. Farmers growing trees in poorly drained soils that are particularly susceptible to root rot can elect to grow species with greater natural resistance to the disease.

In the coming years, buyers will likely encounter an increased diversity of tree species from around the world when they go to pick out their holiday evergreen, Chastagner says, adding that “consumers are going to have more choices.”

So despite the changing climate, evergreen trees could continue to grace our homes for many Christmas seasons to come.