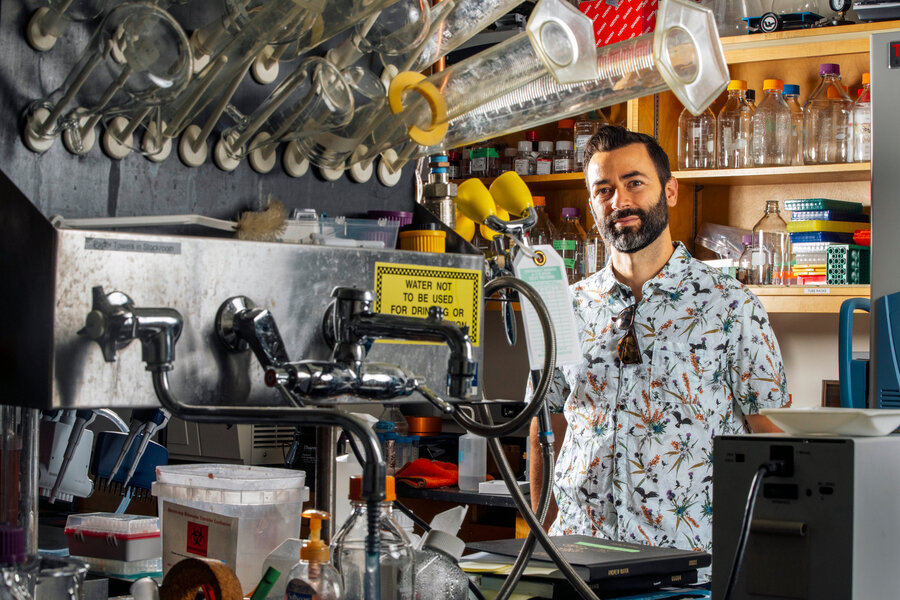 Alex K. Shalek, an MIT associate professor of chemistry, uses technologies such as single-cell RNA-sequencing to analyze differences in gene expression patterns of individual cells, and to figure out how each cell contributes to the function of a tissue or organ. Credit: M. Scott Brauer

Within a given tissue or organ, cells may appear very similar or even identical. But at the molecular level, these cells can have small differences that lead to wide variations in their functions.

Alex K. Shalek, an MIT associate professor of chemistry, relishes the challenge of uncovering those small distinctions. In his lab, researchers develop and deploy technologies such as single-cell RNA-sequencing, which lets them analyze differences in gene expression patterns and allows them to figure out how each cell contributes to a tissue’s function.

“Single-cell RNA-sequencing is an incredibly powerful way to examine what cells are doing at a given moment. By looking at associations among the different mRNAs that cells express, we can identify really important features of a tissue—like what cells are present and what are those cells trying to do,” says Shalek, who is also a core member of MIT’s Institute for Medical Engineering and Science and an extramural member of the Koch Institute for Integrative Cancer Research, as well as a member of the Ragon Institute of MGH, MIT and Harvard and an institute member of the Broad Institute of Harvard and MIT.

While his work focuses on identifying small-scale differences, he hopes that it will have large-scale implications, as he seeks to better understand globally important diseases such as HIV, tuberculosis, and cancer.

“A lot of what we do now is global collaborative work that really focuses on understanding the cellular and molecular basis of human diseases—partnering with people in over 30 countries on six continents,” he says. “I love fundamental work and the precision possible in model systems, but I’ve always been very motivated to connect our science to human health, and to understand what’s happening in different diseases so we can develop better preventions and cures.”

As a student at Columbia University, Shalek bounced between a few different majors before settling on chemical physics. He started out in physics because he wanted to understand the fundamental laws of how the physical world works. However, as he got farther along, he realized that most of the research opportunities available involved detection of high-energy particles, which didn’t appeal to him.

He then took some math courses but didn’t feel a real connection to the material, so he switched to chemistry, where he encountered a course that resonated with him: statistical mechanics, which involves using statistical methods to describe the behavior of large numbers of atoms or molecules.

“I loved it because it helped me understand how all these rules that I’d learned in physics about microscopic particles actually translated to macroscopic things in the world around me,” Shalek says.

Torn as to what he wanted to do after graduating from college, he decided to go to graduate school. At Harvard University, where he earned a Ph.D. in chemical physics, he ended up working with Hongkun Park, a professor of chemistry and of physics. Park, who had just received tenure for his work measuring the optical and electronic properties of single molecules and nanomaterials, was in the midst of building a new program to study the brain. Specifically, he wanted to find ways to make high-precision electrical measurements of many neurons at once.

As the first to join the new effort, Shalek found himself responsible for figuring out how to create computational models, fabricate devices, write software to control the electronics, analyze the data, and many other things that he didn’t know how to do, on top of learning neurobiology.

“It was challenging, to say the least. I got a crash course in how to do a bunch of different things,” he recalls. “It was a very humbling experience, but I learned a lot. By begging my way into various labs around town at Harvard and MIT, I was able to pick things up faster. I got very comfortable taking up new subjects and tackling hard problems by leaning on others and learning from them.”

His efforts led to the development of several new technologies, including arrays of nanowires that could be used to record neuron activity as well as to inject molecules into individual cells without harming them and to remove some of the contents of the cells. This proved especially useful for studying immune cells, which usually resist other delivery methods such as viruses.

Shalek’s work in graduate school stimulated his interest in systems biology, which involves comprehensively measuring many aspects of a biological system using genomics and other techniques, then building models that account for the observed measurements, and finally testing the models in living cells using perturbation techniques. However, to his frustration, he often found that when he tried to test a prediction of a model, not all of the cells in the system would show the expected outcome.

“There was a lot of variability,” he says. “I’d see differences in the level of mRNAs, or in the expression or activity of proteins, or sometimes all my cells wouldn’t differentiate into the same thing.”

He began to wonder if it would be worthwhile to try to study each individual cell within a system, instead of the traditional approach of doing pooled sequencing of their mRNA. During his postdoc, he worked with Park and Aviv Regev, an MIT professor of biology and member of the Broad Institute, to develop technologies for sequencing all of the mRNA found in large sets of individual cells. This information can then be used to classify cells into distinct types and reveal the state they’re in at a given moment in time.

In his lab at MIT, Shalek now uses improvements he’s helped make to this approach to analyze many types of cells and tissues, and to study how their identities are shaped by their environments. His recent work has included studies of how cancer cell state impacts response to chemotherapy, the cellular targets of the SARS-CoV-2 virus, analysis of cell types involved in lactation, and identification of T cells primed to produce inflammation during allergic responses.

An overarching theme of this work is how cells maintain homeostasis, or the steady state of physical and chemical conditions within living organisms.

“We know how important homeostasis is because we know that imbalances can lead to autoimmune diseases and immunodeficiencies, or to the growth of cancers,” Shalek says. “We want to really define at a cellular level, what is balance, how do you maintain balance, and how do various environmental factors like exposures to different infections or diets alter that balance?”

Shalek says he appreciates the many opportunities he has to work with other researchers around MIT and the Boston area, in addition to his many international collaborators. As his lab works on problems of human disease, he makes sure to help nurture the next generation of scientists, the same way that he was able to receive training and mentoring as a graduate student and postdoc.

“If you put together the collective brain trust of this community, as well as partner with people all around the world, you can do incredible things,” Shalek says. “My experience taught me the importance of supporting and empowering scientists and of trying to uplift the community, which is a lot of what I’ve focused on. I recognize that a lot of my success has depended upon people opening their labs and giving me time and supporting me, and so I’ve tried to pay that forward.”

This story is republished courtesy of MIT News (web.mit.edu/newsoffice/), a popular site that covers news about MIT research, innovation and teaching.

Citation: Technologies for single-cell RNA profiling can help dissect the cellular bases of complex diseases around the globe (2022, July 21) retrieved 10 August 2022 from https://phys.org/news/2022-07-technologies-single-cell-rna-profiling-cellular.html