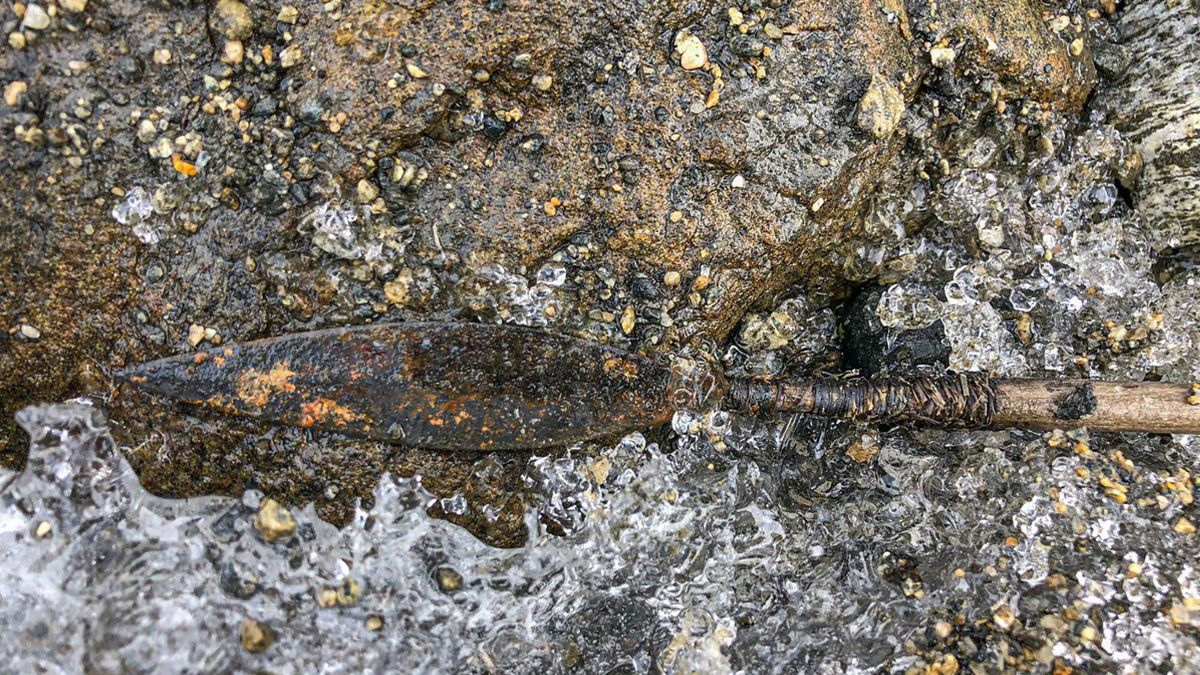 A spectacularly preserved arrow from the Iron Age — complete with its iron arrowhead, sinew wrappings and aerodynamic feather fletching — is now in the hands of glacial archaeologists in Norway.

It’s rare for arrow fletching to preserve, as the delicate feathers that help guide the arrow in flight usually decay over time. The arrows of Ötzi the Iceman, who died about 5,300 years ago in what is now the Italian Alps, also have preserved fletching, although their condition isn’t as good as that of this newly discovered 1,700-year-old arrow, the archaeologists said.

“I think it is perhaps just the Ötzi-find which has preserved fletching on arrows, but his arrow fletchings are nowhere as well preserved as some of ours,” Lars Pilø, an archaeologist at the Department of Cultural Heritage, Innlandet County Council, Norway, co-director of the Glacier Archaeology Program, told Live Science in an email.

However, “his are older too, by several thousand years, so this is not to diss Ötzi’s arrows,” Pilø said.

The archaeologists found the 31.5-inch-long (80 centimeters) arrow during a survey at an undisclosed site in the Jotunheimen mountains in southern Norway in 2019, the glacial archaeology group Secrets of the Ice announced on Twitter on April 28.

“It is probably the best preserved arrow we have found so far,” said Pilø, who is also editor of the Secrets of the Ice website. For instance, the sinew, wrapped around the front end of the arrow shaft to reduce the risk of fracture on impact, is still “wrapped tightly” and in place, he said. The remains of the thread and tar used to craft the arrow are also present.

It’s rare to find steering feathers on such an old arrow. (Image credit: Espen Finstad/secretsoftheice.com)Image 2 of 3

All parts of the arrow — the arrowhead, sinew, shaft and fletching — are well preserved. (Image credit: Espen Finstad/secretsoftheice.com)Image 3 of 3

The team found the arrow at an undisclosed location in the Jotunheimen mountains in southern Norway. (Image credit: Espen Finstad/secretsoftheice.com)

“No wood species determination has been made, but the shafts of this type tend to be made in pine,” Pilø added. “Hopefully, it will be possible to find out which birds the feathers come from, what animal the sinew came from, etc.”

The team decided to forgo radiocarbon dating, as they would have to destroy part of the arrow when taking a sample to test its carbon isotopes (variants of the element carbon). They would rather the entire arrow stay intact for when it goes on display in a museum, he said.

But, because this style of arrow is well known, it’s fairly easy to date. “The shaft type is known from Danish weapon sacrifices found in bogs, and the arrowhead is also a well-known type from graves in southern Norway,” Pilø said, so it’s likely that this weapon dates to between A.D. 300 and 600.

At that time, hunters would have gone into the mountains and used arrows like this one to shoot reindeer, he added.

This arrow is one of eight that Secrets of the Ice found during the 2019 survey. The archaeologists hope to find more artifacts soon, as Norway’s glaciers are melting due to climate change. In one instance, the team found an arrow at the edge of the ice at one site in 2013. “The location of this find is now 100 m [328 feet] from the ice,” Pilø said.