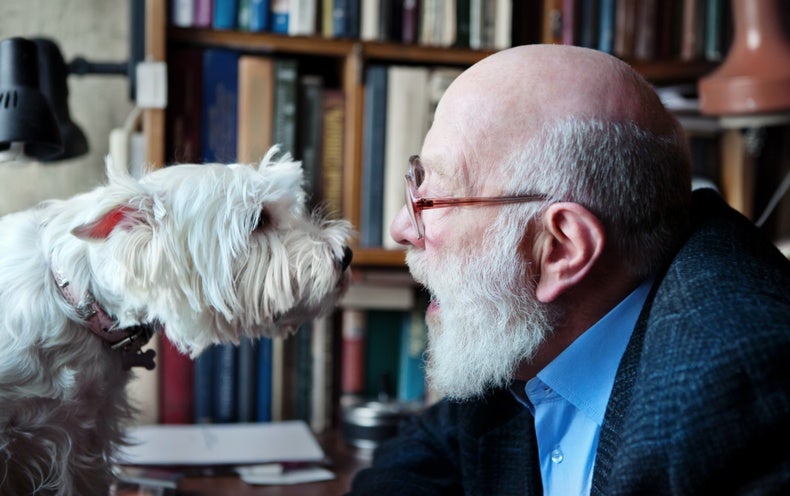 Dogs Can Distinguish Speech from Gibberish—and Tell Spanish from Hungarian

Many animals can pick out auditory patterns in human speech—but it turns out that dogs are particularly good at doing so.

It is no secret that dogs are pretty special when it comes to how interested they are in humans and how they interact with us. But how much do they capture the subtleties of the language coming out of our mouths? Do they perceive it distinctly as speech, as opposed to other sounds reaching their ears? Are they processing what we are saying even when we do not say their favorite words? A new study published in NeuroImage suggests they are.

Almost four years ago neuroscientists Laura Cuaya and Raúl Hernández-Pérez moved from Mexico to Budapest with their two border collies and one cat. When they realized how different it was to be surrounded by people speaking Hungarian instead of their native Spanish, they wondered if their canine companions had noticed this as well.

Cuaya and Hernández-Pérez work in a research group at Eötvös Lórand University in Hungary that studies the evolution of speech perception in mammals, including dogs, with tools such as functional magnetic resonance imaging (fMRI), which monitors changes in brain blood flow. More blood flowing to a specific region of the brain means more activation—allowing researchers to glimpse changes in brain activity in response to certain stimuli.

In 2016 the university group showed that dogs activate different neural pathways to recognize the meaning of words than they do to sense changes in emotional intonation. But no one knew whether the animals could distinguish actual human speech from slightly different sounds that did not constitute a long string of words. And no one knew whether a dog could pick up when a person was speaking a different language.

The researchers recruited 18 family dogs, including the border collies, Kun-Kun and Odín, who had come from Mexico. The dogs were familiar with either Hungarian or Spanish but not both—and they had been previously trained to lie still in an fMRI machine. Through a pair of noise-canceling headphones, the dogs heard passages from Antoine de Saint-Exupéry’s The Little Prince in either Spanish or Hungarian.

From the fMRI scans, the researchers saw the same areas of the brain light up but with different activation patterns, depending on whether the dogs were hearing the story in their native language or a new one—suggesting that they were neurologically processing differences between the two languages.

Then the researchers tried to test whether the dogs were responding to specific characteristics intrinsic to each language. Were the animals reacting to actual changes in speech patterns—that Hungarian words put stress on the first syllable, for instance—or just responding to basic differences in fundamental auditory signatures between the two languages—alterations in tones that occur during vowel pronunciation? They tested this by playing recordings in which the speech from the story had been garbled, resulting in gibberish that “sounded” like Hungarian or Spanish. Again, the team saw different patterns in brain activity when a dog heard real human speech instead of speechlike gibberish, although the researchers cannot yet say whether this is evidence that dogs can recognize human speech as speech (sounds strung together in a meaningful way for humans to communicate with one another)—or whether their brain was just responding to the more natural sound when compared with the weird-sounding gibberish. There was no change in brain activity between hearing Spanish gibberish versus Hungarian gibberish, however, implying that the canines’ brain was not just responding to the different tonal qualities.

Altogether the study shows that the brains of dogs can detect a difference between speech and speechlike sounds and can even tell apart different human languages. “This is the first time we’ve demonstrated that a nonhuman brain can distinguish language,” says Cuaya, noting that while other animals can be trained to hear a difference between human languages, the dogs were able to do it without explicit training. “It’s a really cool new study of dog perception of speech,” says animal behavior scientist Holly Root-Gutteridge of the University of Lincoln in England, who was not involved with the work.

“A lot of people just assume that when we talk, dogs are just hearing ‘blah blah blah,’” says Root-Gutteridge, but they are actually picking up on our speech rhythms and how we sound when we speak a language.

The results also have some interesting evolutionary implications. “One really interesting thing about dogs and humans is that both species are extremely different,” evolutionarily speaking, says Hernández-Pérez. “But there’s a point in the evolution of humans and dogs in which both species were exposed to complex social environments.” And even though there are biological and evolutionary differences in brain structure, both species have evolved different ways to detect changes in human speech patterns—although future experiments are necessary to parse whether dogs have brain regions dedicated to detecting changes in human speech that were honed over eons of spending time with humans or whether their ability represents more general auditory pattern recognition.

Cuaya adds that even though many animals are capable of auditory pattern recognition, dogs are unique for their persistent interest in humans. “The wonderful thing about dogs is they want to cooperate,” she says. “They want to understand us.”