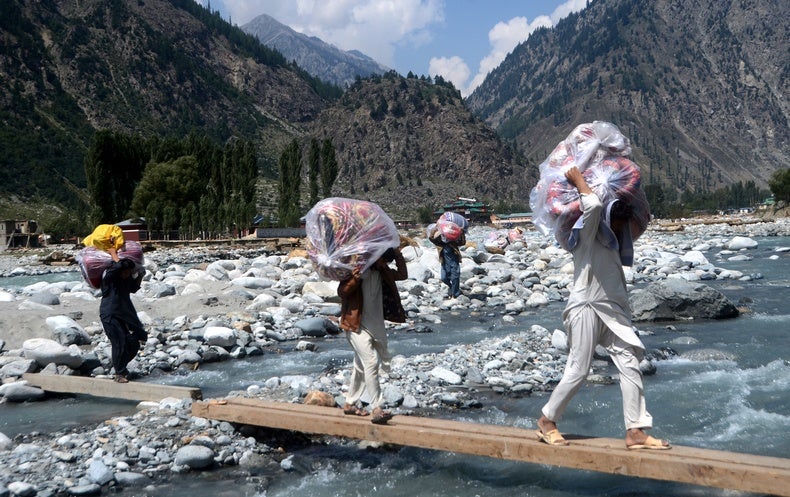 Diseases Explode after Extreme Flooding and Other Climate Disasters

More than four months after devastating monsoon floods began in Pakistan, at least 1,500 people have died, and the waters that inundated nearly the entire country have yet to recede. This ongoing emergency is causing illness and communicable disease to spread, and these effects are likely to be much more deadly than the initial catastrophe. “The public health risks are worse, and the death toll could be much higher,” says Richard Brennan, regional emergency director for the eastern Mediterranean region at the World Health Organization (WHO).

Although sources vary on the exact number, nearly eight million people have been displaced in Pakistan, according to the United Nations, and a large number of them are living in unsanitary conditions. Such situations are growing more common. As climate change increases the frequency and severity of extreme rainfall events, these disasters are triggering a secondary emergency of disease transmission. And although preventing the worst-case scenarios may seem like an impossible task, there are solutions that exist to mitigate the health impacts of future flood disasters.

The Situation in Pakistan

Historically, in flooding disasters, “what normally happens is you have something acute. And within weeks, sometimes days, you do search and rescue, and then you shift into recovery and rebuild mode,” Brennan says. “With this flood, we are still in the acute phase of the emergency.” Recently back from surveying conditions on the ground in Pakistan, he says he witnessed “oceans of water persisting over probably thousands of square kilometers.” Onlyabout 600,000 of the more than seven million displaced people are living in organized camps. The rest, he says, are spread out along the roadside from Karachi, on the shore of the Arabian Sea in the south, all the way to the northern provinces. Those on the side of the road are “in some ways, the lucky ones because they can receive aid,” Brennan says. “Thousands of communities can only be reached by boat.”

The reality of millions of people living in crowded, unsanitary conditions without access to clean water or working health care facilities has created conditions favorable for the spread of disease. Standing water is an ideal breeding ground for mosquitoes, which are currently spreading malaria and dengue fever in Pakistan, Brennan says. Respiratory illnesses are rampant. And toxic floodwaters have caused skin infections and scabies. Additionally, the U.N. Population Fund estimates there are more than 127,000 pregnant people in the country, about 2,000 of whom are giving birth every day (although other estimates vary). “Where do they do that? On the side of the road?” Brennan asks. Meanwhile flooded cropland and a countrywide loss of food storage are causing widespread malnutrition. And impacts on mental health have not yet been measured. Brennan says it will be months before all the floodwaters finally recede. As climate change causes more events like this one, Pakistan presents a devastating portent of things to come.

How the Changing Climate Is Impacting Floods

Climate change’s impacts aren’t the same across the world: Thewarmer atmosphere is holding more water, and rain events are growing more extreme.Whether or not the increased volume of water is boosting the frequency and power of floods depends on where the rain occurs, however. “It’s not just the extremity of precipitation that matters. It is also a function of the land surface in a bunch of different ways,” says Daniel Swain, a climate scientist at the Institute of the Environment and Sustainability at the University of California, Los Angeles. In areas where flood interventions, such as levees and restored wetlands, are in place, increased flooding is less likely. And in some places where the land is drier it is more likely to act like a sponge and retain water, Swain says. In contrast, in areas where humans have paved over streams and waterways, flash flooding is increasing. And in places where the land is increasingly wetter, the soil is less able to absorb extreme downpour events. The effects of ocean flooding are much more predictable because it is primarily affected by sea-level rise.

“The old aphorism that ‘when it rains, it pours’ is literally true in this context. It actually encapsulates a lot of the complexity that’s here,” Swain says. This is something he calls “the extremeness threshold”: Flooding is not increasing everywhere. But in places in the world where atmospheric and surface conditions are just right, extreme weather events are causing more frequent and more powerful floods. And that means the global health consequences will be unevenly distributed as well.

In places where flooding is increasing, scientists can monitor certain trends to predict how the growing threat will impact public health. “When you look at disasters as systems that create vulnerability, you know that preexisting conditions are going to be aggravated in a disaster,” says Njoki Mwarumba, an assistant professor of emergency management and disaster science at the University of Nebraska Omaha. Racial, socioeconomic and health disparities can predict how emergencies will impact a region. Inequality will be the deciding factor in who is the most impacted and how. “Disasters don’t create those [problems], they amplify them,” Mwarumba says.

Adding to the problem, climate change has increased the range of disease vectors, she says. The warming planet is causing an uptick in, for example, Zika, malaria and West Nile fever because mosquitoes that spread these diseases can now thrive in regions that were historically too cold for them. When more frequent flood disasters occur in those areas, spread of mosquito-borne illnesses will increase. Floodwaters are notoriously virulent as well. After Hurricane Ian this year, Florida experienced a spike in flesh-eating bacteria infections.

Occasionally, new diseases arrive in disaster-stricken areas as responders from outside the region come to help. After the 2010 earthquake in Haiti, for example, U.N. peacekeeping forces infected with cholera spread the waterborne illness to locals, Mwarumba says. (The U.N. has not accepted responsibility for the outbreak, and lawsuits demanding compensation for victims have been rejected.) Before the U.N. peacekeepers arrived, the disease was not present in the country. But since then cholera has persisted, with outbreaks occurring regularly. One such resurgence happened after flooding caused by Hurricane Matthew in 2016. As more frequent disasters create more intermingling of populations in this way, disease spread is likely to increase as well.

That said, thanks to disaster scientists such as Mwarumba, knowing these trends and applying them to regions where flooding emergencies are likely means that solutions can and do exist.

Before disasters happen, direct steps can be taken to prepare and limit the spread of disease. The WHO, Brennan says, works with countries to do risk assessments. They determine what disasters are most likely to occur and develop plans to respond. This includes making sure the medical systems in the country are robust and preparations are in place to manage and organize people.

But not all of these risks are totally predictable in a changing climate. Long before disaster hits, countries can take broad steps that will have big impacts on their preparedness, says Kristen Patterson, director of Drawdown Lift at Project Drawdown, a nonprofit organization that acts as a resource for information about climate solutions. Many of these steps involve fighting poverty and inequality.

Solar power, for example, can greatly impact disaster relief and recovery efforts. This is especially the case if such a power system is connected off-grid to health centers that are built in robust ways—for example, elevated off the ground—to withstand storms. When Hurricane Ian recently hit Florida, although most people in its path lost power, one solar-powered community never lost electricity, Patterson says.

Most importantly, she says, family planning, education and the reduction of poverty rates can have some of the biggest impacts on disaster preparedness and a country’s ability to weather a storm. “In public health, the demographics in Pakistan were already compromised before the flood,” Patterson says. But if countries “boost food security, alleviate poverty and address water and sanitation issues,” they could be on a path to preventing some of the worst health outcomes of disasters. And as a bonus, many of the solutions to these problems are also great ways to reduce emissions and fight climate change more broadly.