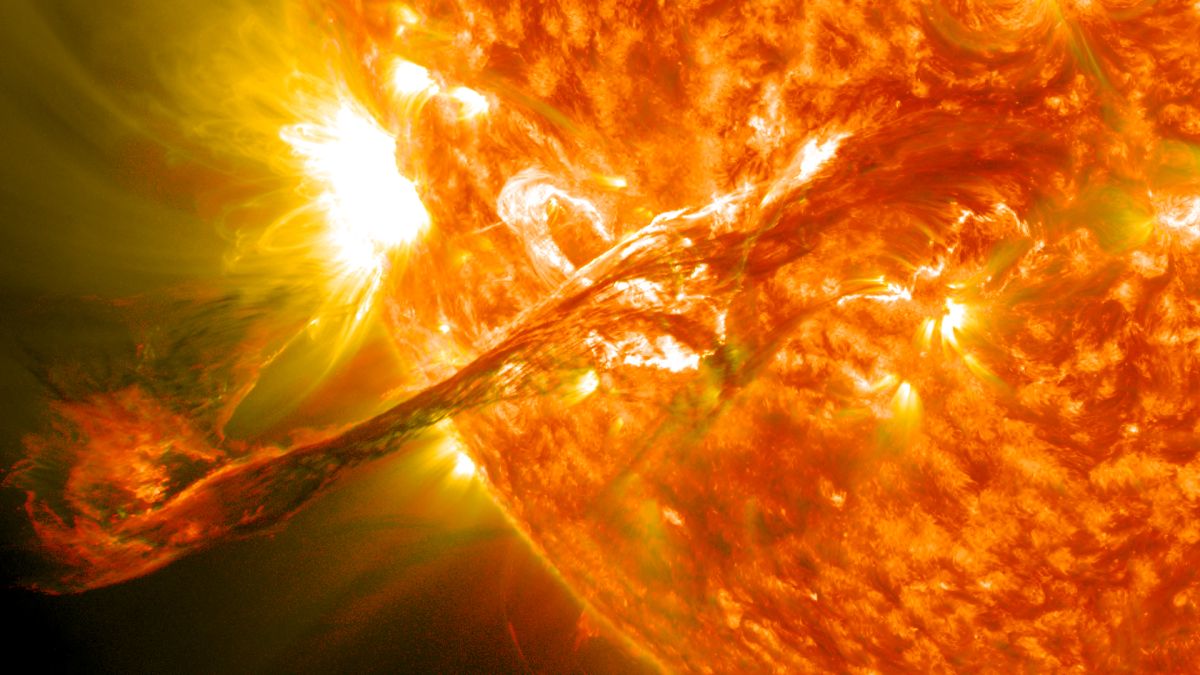 Ancient solar storm smashed Earth at the wrong part of

An extremely powerful solar storm pummeled our planet 9,200 years ago, leaving permanent scars on the ice buried deep below Greenland and Antarctica.

A new study of those ancient ice samples has found that this previously unknown storm is one of the strongest outbursts of solar weather ever detected and would have crippled modern communications systems if it had hit Earth today.

But perhaps most surprising, the massive storm appears to have hit during a solar minimum, the point during the sun’s 11-year cycle when solar outbursts are typically much less common, according to the study, published Jan. 11 in the journal Nature Communications. Because of this unexpected discovery, the study researchers are concerned that devastating solar storms could hit when we least expect them — and that Earth might not be prepared when the next big one arrives.

“These enormous storms are currently not sufficiently included in risk assessments,” study co-author Raimund Muscheler, a geology researcher at Lund University in Sweden, said in a statement. “It is of the utmost importance to analyze what these events could mean for today’s technology and how we can protect ourselves.”

Related: The 12 strangest objects in the universe

One of the long ice cores examined in the new study. (Image credit: Raimund Muscheler)

Solar storms occur when magnetic field lines on the sun’s corona (the outermost part of the sun’s atmosphere) become tangled up and then violently snap back into place. This sudden magnetic reconnection can release huge gouts of plasma and magnetic field known as coronal mass ejections (CMEs), which surf across space on the sun’s ever-gusting solar wind.

If a powerful CME passes over Earth, it can compress the planet’s magnetic shield, causing what’s known as a geomagnetic storm.

Mild geomagnetic storms can damage satellites and interrupt radio transmissions; severe storms, like the “Halloween storms” of 2003, can cause widespread power outages across the world and permanently damage electrical infrastructure, such as power transformers. Some researchers fear that a sufficiently large solar storm could also ravage the world’s undersea internet cables, resulting in an “internet apocalypse” that leaves huge chunks of the world population disconnected for months.

CME outbursts typically peak every 11 years or so, when the sun enters the part of its natural activity cycle known as the solar maximum — the time when magnetic activity in the corona is in high gear.

These radioactive particles can appear in natural records, like tree rings and ice cores. In the study, the authors looked at the latter, analyzing several cores drilled in Antarctica and Greenland. Cores from both locations showed a remarkable spike in the radionuclides beryllium-10 and chlorine-36 around 9,200 years ago, indicating that a powerful solar storm swept across Earth at that time.

Further analysis of the cores showed that the storm was particularly powerful — perhaps on a par with the most powerful solar storm ever detected, which occurred during a solar maximum between the years 775 B.C. and 774 B.C.

The newly discovered storm’s occurrence during a solar minimum, when magnetic activity on the sun should be low, left the study authors puzzled and alarmed.

“This [storm] further pushes the magnitude of a potential worst-case scenario for [solar storm] events,” the researchers wrote in the study.

According to the study authors, it is now essential for researchers to detect more ancient, extreme storms in the ice-core and tree-ring records, to determine if there is some sort of pattern beyond the sun’s 11-year cycle that dictates when the most extreme storms will occur.