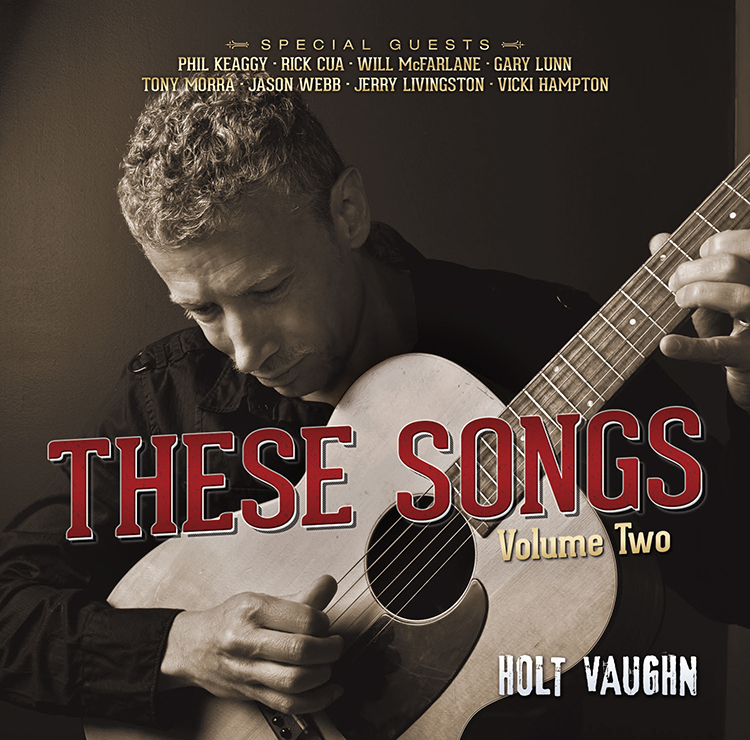 Holt Vaughn’s new album These Songs, Vol. 2 continues following the template established with the talented musician and songwriter’s preceding work. Vaughn has a core cast of musicians helping him bring this album to life, but he shows the extent of the respect his contemporaries and peers have for his talents by calling upon an impressive array of singers, guitarists, drummers, and keyboard/piano players for the album’s ten tracks.

Guest singer Vicki Hampton provides backing vocals on half of the album’s songs and the contrast to Vaughn’s voice she provides songs such as “Got to Pray (Satan He Don’t Rest)” is an essential part of what makes those tracks memorable. He doesn’t restrict himself to this style alone, but blues certainly casts a long shadow over the album’s songs. The album’s second track “Forewarned” has echoes of a Biblically influenced perspective present in its lyrics and the blues is still here as well, but Vaughn shuffles the deck. The song has an acoustic foundation and sets the bar for what can expect from future such songs. It has a fresh and glistening texture that sweetens the otherwise bluesy sound. It has gravitas and lyricism without ever sounding crass.

“Muddlety” is the first of a pair of instrumentals. This instrumental cut is an acoustic guitar dialogue between Vaughn and former Glass Harp guitarist Phil Keaggy with several unexpected twists and turns along the way. It’s one of the best examples of how the album’s outstanding production frames Vaughn’s songs in the best possible light. “Muddlety” has an excellent pace and a pristine guitar sound that gives it a lyrical lift.

He returns to the album’s bluesy roots with the track “I Don’t Know Why (You Treat Me Like You Do)”. It sounds like the title for a bucket of blood blues, but Vaughn upends listener’s expectations. He gives listeners a stylized blues instead with an effective mix of acoustic and electric guitar and it gains extra oomph thanks to keyboardist Jason Webb. His piano and keyboard playing brings vivid color to the performance.

“Dandelion” is one of These Songs, Vol. 2’s most sensitive moments. It draws instantly relevant parallels between the simple dandelion flower and the blessing of watching a child’s innocent eyes finding joy in the world we often lose perspective about. Vaughn turns in some especially sparkling guitar work here, but it’s never ostentatious. It’s another instance of how Vaughn has been able to write music reflective of his personal philosophy without ever risking sounding preachy to his listeners.

These Songs, Vol. 2 doesn’t fail to surprise you in low-key fashion but one of its more jolting moments arrives with the song “Susie Jones”. This all-out rocker isn’t completely devoid of sense, however, and the lyric especially skillfully sketches out a character for listeners. His ability to pull wild cards out of the deck and do so convincingly is only one of many fine qualities recommending Holt Vaughn’s latest album. These Songs Vol. 2 maintains a high level of energy from beginning to end, as well, and never lacks for passion.