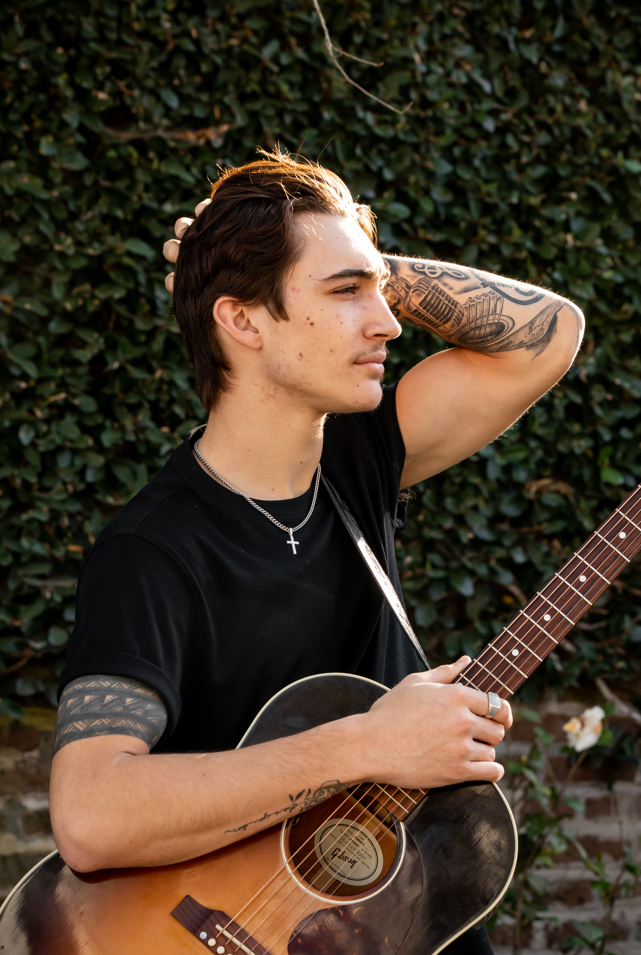 North Carolina native, Avery Roberson, realized his love of music and acquired his talent for entertainment from his father and grandfather. Music was all around Avery growing up, and Dad, Tony, played in a country music band called the Hutchins Brothers. They had a Top 100 hit in the late 80s. As a result, Avery picked up the guitar and started singing at an early age. It didn’t take long for him to fall in love with Country Music.

Avery got his break when NBC’s The Voice cast him in their 20th Season. He finished in the top 28, and the experience solidified his thirst for the stage. Since then, Avery has been writing, spending time in the studio, and playing at live events such as the Carolina Country Music Festival. He released his first single, “Ringtone.” which debuted on iTunes Top 100 Country Chart, followed by a second release, “Lord Have Mercy.” The song “Alive” is his most famous song yet, with over 1.5 million streams.

The Mind of a Musician:

When did you make up your mind that you wanted to be a musician?

My dad got me into music when I was in middle school, showing me tapes of him playing.  He was about my age in those tapes.  He was really busy with work, but he showed me a couple of chords on the guitar.  Then, I taught myself to play the guitar through Youtube videos–looking up how to play chords, and listening to different types of music that I could replicate.

Please discuss how you interact with and respond to fans.

Generally, if I am at a live show, I make the time to speak to fans personally and shake hands afterward.  On social media platforms, I respond to as many comments as I can because if it weren’t for the likes and comments, I wouldn’t be where I am.  It’s important for me to show my appreciation and be responsive to their support.

When performing and the crowd is singing along, how does that energy make you feel?

That’s what I hope for when I play!  As an artist, It motivates you and you focus on having a good time.  It makes your performance better when everyone lets loose and has fun.

What’s the biggest highlight of your career thus far?

Having over 1 million streams on one of my original songs, because I put everything into writing my songs.

Is there a hidden meaning in any of your music?

“ Alive” is a sad story song.  A lot of people think that the guy has committed suicide.  But in fact, it’s his spirit that is dead, due to the breakup.

Which famous musicians have you learned from?

When I was in band class in middle school, I watched a movie about The Temptations.  I immediately went home to do research on them.  I was mesmerized by them, and it sparked me. That’s when I fell in love with and wanted to mimic older R&B artists.  Otis Redding is another R&B artist that inspired me, as well.  It’s easy to transfer R&B style over to older country songs like Garth Brooks.  Currently, I really look up to Chris Young. I love his style of singing and look to him in finding my own voice.  I can’t forget Eric Church and Morgan Wallen, too. I know that everyone says that about them, but there’s a reason why.

When it comes to performances, you just know. You’re hitting every note, you’re not scared and you’re getting good feedback from the crowd.  With a song, it’s a gut feeling.  You know it’s a good song when you finish and all you want is to share it with everyone.

How often and for how long do you practice?

I play every day, but I try to record and post a video about every other day on social media. I push myself vocally, so I just get better and better.

Do you have any advice for anyone wanting to sing as a career?

Believe in yourself and trust the process. Give it all you’ve got.  The harder you work the better the outcome.

Who helped you most in your journey?

Definitely my mom and dad. They’ve always known from a young age what I wanted to do.  They push me and help me keep my head up.

What would you do differently if you were to start over again from day one?

I would go back to high school and tell my high school self to be more confident and to put myself out there more.

If you could change anything about the industry, what would it be?

That’s tough.  I would ask the industry to shine a light on more undiscovered artists.  There’s a lot of unnoticed talent.  The low social media following should not determine an artist’s talent.  Industry needs to look at the person and see if they have what it takes.

How would your peers describe you in the music industry?

They would describe me as meticulous and a perfectionist.  I don’t want people to say I’m a decent artist, I want them to say that I’m a “great” artist.

How would the people closest to you describe you outside of the industry?

They would describe me as a very goofy guy, not serious or uptight.  Outside the industry, I am really laid back and like to show as much personality as I can.

Do you have any hobbies or interests outside of music?

When I’m not playing music, I like golfing. It’s my main hobby, but I also like to fish and hunt.  Golfing allows my brain to rest, so that when I do music, I am more involved and focused.