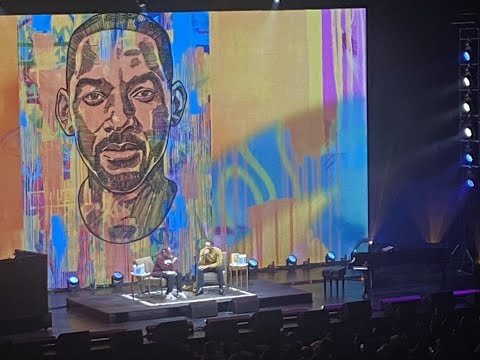 Will Smith started the night rapping — then settled in next to Spike Lee as a Hollywood star and now an author. Whatever he did onstage, the multi-talented actor was cheered by adoring fans in the filled-to-capacity 3,000-seat historic Kings Theatre, a grandly restored former 1929 movie palace-turned-performance space in the heart of Brooklyn. This was a book event unlike most to promote his new autobiography Will. Copies piled high on tables were included with a ticket.  Will was written over three years with Mark Manson after Smith said he’d reached a pinnacle of success and was ready to “give back.” The night was a video-music-storytelling voyage through his life as a kid in West Philly to stardom to self-actualization. He read from the opening chapter, called “Fear” (of his former mil …
————————————————————————-

#WillSmith’sRappingReadingSpokenWordBookTourTheBrooklynStopHadItAll
#KingRichard, #SpikeLee, #WillSmith, #Will
Copyrighted music by https://www.ntmediastudio.com/
We use background music from this channel https://www.youtube.com/channel/UCIZ8_Xpxgn_lONAp32IEJqA

The Libertines Reissuing Up the Bracket for 20th Anniversary

The Ultimate Guide to Clothing Rentals in the UK

Award-Winning Author Hilary Mantel Reflects on Her Childhood and Illuminates