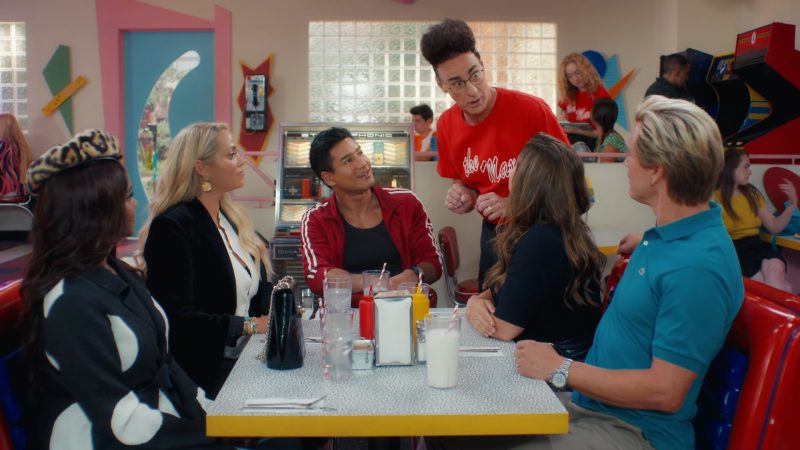 Following its return today, Peacock has revealed a brand new clip from the premiere episode of Saved by the Bell Season 2, featuring a tribute to Screech, portrayed by original cast member Dustin Diamond who died earlier this year at the age of 44 due to cancer.

In the Saved by the Bell Season 2 clip, the original gang including Mark-Paul Gosselaar’s Zack, Mario Lopez’s Slater, Tiffani Thiessen’s Kelly, Elizabeth Berkley Lauren’s Jessie, and Lark Voorhies’ Lisa have all gathered at The Max to take a trip down memory lane and remember their departed friend. The video also features Screech’s iconic robot Kevin as he serves them the diner’s newest addition to The Max menu “Screech’s Spaghetti Burger.”

RELATED: Punky Brewster Revival Canceled After One Season at Peacock

“In Season 2 of Peacock’s hit comedy Saved by the Bell, Bayside High gears up to compete in the Southern California School Spirit Competition,” reads the official synopsis. “Daisy is determined not to get sidetracked by ‘Bayside nonsense,’ but when a cute new student is elected student council VP, she finds herself in way over her head. Mac sees the competition as a way to finally step out from his father’s shadow. Jamie leans on Lexi in the wake of his parents’ divorce while Lexi struggles to be a more understanding girlfriend; Aisha seeks a new outlet after football is canceled; DeVante finds love with a rich Bayside girl, and Slater and a newly single Jessie grow closer despite their tumultuous romantic past.”

The first season addressed many important topics such as race, inclusion, class, and education. In the season finale, Daisy (Haskiri Velazquez) stages a walkout in order to keep the Douglas High students at Bayside.

Saved by the Bell is executive produced and written by Emmy-winning 30 Rock writer-producer Tracey Wigfield. Peter Engel and Franco Bario also executive produce. The series is produced by Universal Television for Peacock.