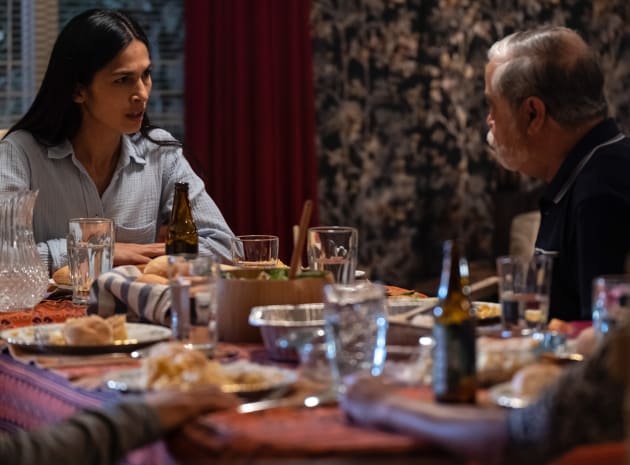 Family secrets and expectations are a burden.

It’s only a matter of time before the guilt-ridden and stressed-out teenager cracks.

From the minute Lolo and Lola, aka Jacinto and Alma, arrive, the atmosphere in the De La Rosa family changes. Usually, the sisters are laid back with Chris, Jaz, and Luca, but the grandparents are old-fashioned and strict.

Marco was their golden child, and Jacinto blamed Thony for getting the police involved. She should have known what the American police would do to a Filipino man.

Thony was in a difficult spot, trying to appease her in-laws and protect her nephew, and Jacinto wouldn’t let anything go. He berated Thony’s parenting skills, saying she spoiled Luca.

That hit a nerve since mothers are fierce about protecting their young. There is no way Thony will let Luca’s grandparents raise him after she’s fought so hard for him.

Filipino values are different than American family values. Over there, both Fiona and Thony felt suffocated by constantly adhering to rules and making the men feel important.

Jacinto: What kind of wife puts an APB on her husband?
Thony: Marco shouldn’t have taken Luca. Everything I did, I did for my son.

While Fiona hated lying, technically, Marco gambled their savings away that Thony saved for Luca’s surgery.

Since he’s the patriarch and believes his son can do no wrong, Jacinto defends Marco to the point that everyone is uncomfortable.

His wife is much more reasonable and wants to protect her grandchildren from these fights, but it’s too much for Chris.

Accidentally killing someone is too much for any teenager, but the grandparents keep comparing Chris to Marco, which is untrue. Chris started as a disrespectful, whiny teenager, but he’s grown into a young man protective of his family.

This storyline has allowed Fiona to see how Thony cleans up crimes and has a new respect for her as they pull together to protect Chris.

The main problem is that Chris is starting to crack under pressure. He hates that his mom and aunt are lying and wants to face the consequences.

Chris: You lied, mom! Uncle Marco didn’t die because of his gambling. He died because of me.
Fiona: It’s not your fault. Everything I said was true. He was an addict. His gambling hurt all of us. Nothing we do now can change what he did or what happened. All that matters now is protecting you.

That could be dangerous if his grandfather and the FBI want him to pay.

Thony must love Arman to endure the embarrassing pat-downs to get into the prison. While every visitor gets patted down, I felt for Thony since she was detained not long ago, which probably brought back uncomfortable memories.

She dealt with those and only wanted to help Arman when she saw how badly Hayak had Arman beaten.

Garrett’s behavior made me wonder if we’re headed towards a toxic love triangle. Garrett tends to fall for his CIs, but I thought he and Thony were just friends.

However, his behavior was starting to be borderline stalkerish when he followed her to the prison. Is there a reason he hates Arman so much? Is it because he has a crush on Thony?

Garrett: I know you had nothing to do with your husband’s death but the first suspect is always the spouse, especially those with friends with reach, even in prison.
Thony: I don’t know what you think he’s been doing, but Arman was almost beaten to death. You let that happen!

This was the first episode that we saw Garrett’s interaction with his former CI. He was just as controlling with her and told her who she couldn’t date.

While he has these women’s best interests at heart, he comes off as controlling and stalkerish. The only woman that keeps Garrett in check is Agent Russo, and it sounds like she’s leaving.

Garrett needs a hobby other than following his CIs.

Sometimes, it’s about the case, such as following the money to bribe the judge; but lately, it feels like he has his own agenda.

We met Nadia’s charming ex-lover Robert, played by Naveen Andrews. He will be a fun addition to the series since he’s confident, unapologetic, and shined in his scenes with Nadia and Thony.

He believes in gambling and makes Nadia bet for a chance to win the money for Arman’s release.

Since the Feds were watching Nadia, Thony had to pick up the money in her place. Thony handled the situation like a professional, even though it was the day of Marco’s funeral.

She even stripped to prove she wasn’t wearing any wires.

While the two women worked hard for his release, Arman had to stay safe in prison.

Hayak was out for blood and tried to kill the man he once treated like a son. Arman was prepared, though, with an injection.

Is Hayak dead for good? How long until Garrett’s suspicions are enforced that the money was in a flower arrangement?

It’s not over until it’s over.

The De La Rosas made a truce to honor Marco one last time, but is another custody battle for Luca looming?

Nadia and Thony pulled off Arman’s release. As sexy as Arman looked in that orange jumpsuit, we’re even happier to see him in suits again.

How deep in the criminal world will Arman, Thony, and Nadia have to go to repay Robert? Hopefully, Arman doesn’t end up right back in jail.

Over to you, Cleaning Lady Fanatics. How long before Chris cracks and admits the truth?

How indebted to Robert are Arman and Nadia? Chime in below in the comments.

Remember, if you miss an episode, you can watch The Cleaning Lady online via TV Fanatic.

The Cleaning Lady airs at 9/8c on Mondays on FOX.