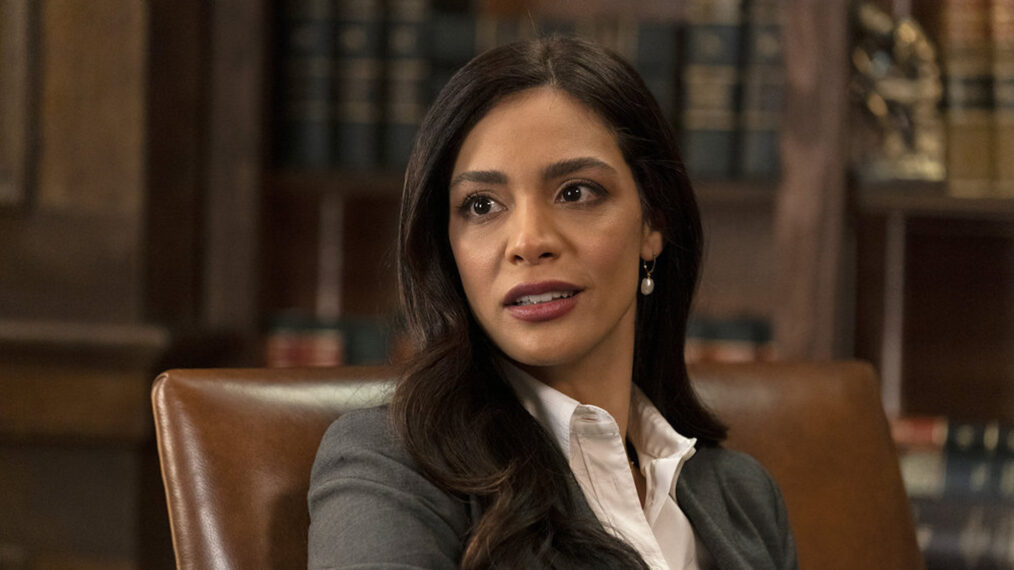 Law & Order Season 21 closes out with a case that’s going to cause some tension in both the NYPD and DA’s office.

In “Black and Blue,” the murder of an off-duty NYPD detective threatens to tear the city apart. Cosgrove (Jeffrey Donovan) mourns the loss of a friend and asks Capt. Benson (SVU‘s Mariska Hargitay) for help solving the case. Meanwhile, in the DA’s office, McCoy (Sam Waterston) and Price (Hugh Dancy) disagree on how to prosecute the culprit, sparking sharp condemnation from all sides.

Last week’s episode was a complicated one for Maroun with the prescription for Wyatt. Talk about that decision. Could it affect her in a significant way going forward?

Odelya Halevi: I think she got really lucky. She was pretty nervous that it’s going to come out. In hindsight for her, she definitely made the wrong choice. Maroun sometimes needs to test the limits. Like in one of the previous episodes where she went behind Nolan’s back and talked to Bernard [Anthony Anderson] and almost got fired, she just keeps on pushing what she thinks is right and her sense of justice. So, this is just one of those cases. Thank God, she got lucky, it didn’t come out. Hopefully my character will continue to push those limits.

Shifting to the season finale, what can you preview about the case and how it affects the DA’s office?

It’s a personal story to all the characters, and I think it’ll start some new and interesting conversations. The stakes are definitely very high in this episode. A little tease about Maroun: You’re going to see a shift in one of her important relationships. Can you say anything about in what way?

You’re going to have to watch. [Laughs]

Talk a bit about Maroun and Nolan’s dynamic a bit. How do you think it’s changed throughout the season?

When they started everything was new, they were just getting to know each other. Now Maroun is getting more comfortable in her own skin and with Nolan — more daring, stronger, has more opinions she’s not afraid to express. With this progression, Nolan has more respect for her opinions also. They have definitely gotten to know each other and have a deeper connection. Like you saw in the last episode, it was revealed that his brother overdosed and now she knows about it. So it definitely changes their relationship from solely business to more personal and there’s more depth to it now. Of the vets who came back for Season 21, you work with Sam Waterston. What can you share about that since at first you were stepping into a new world in Law & Order but now you’ve done a season.

Well, working with Sam in particular, is truly incredible and I can’t wait for the scenes with him! He is so funny, his energy is just wonderful. He’s like my Papa bear. He teaches me so much and it’s always with just his amazing light and amazing personality. I’m so incredibly grateful that I get to work with this legend. He’s God, he’s Law & Order’s God.

In one episode, there was a line I was really struggling with. I hadn’t figured out what to do with it. I talked to Sam and he said that his mother told him sometimes just saying the line simply, is enough. When we started working together, I was really, really nervous. I had just come from being a character on Good Trouble, shooting in LA and all of a sudden I’m in New York, working with all these Emmy-nominated actors and everything was so new. I simply could not believe I was working with Sam Waterston. He saw I was nervous, and said, “Just remember, we’re all here to have fun. So even though we tell serious stories, let’s have fun.” It made all the difference in the world.

Who is Maroun away from work?

We don’t really know yet. I would assume because of the first episode — I feel so lucky that they wrote a little bit of a backstory for Maroun with her sister being raped and murdered —that she’s one of those people who enjoys work so much and feels the weight and importance of being in public service, that she gives up a lot of her personal life. She works hard to do what she thinks is right and what will serve the best.

Is there anything on your bucket list for Season 22 to explore with Maroun?

Finding out more about her personal life is definitely on my bucket list. I’m really hoping that we can explore and dive into that more.

Facebook
Twitter
Pinterest
WhatsApp
Previous article12 Summer Work Shoes That Can Withstand Long Commutes and
Next articleCreate Your Perfect Spring Day, and Get a Cozy Mystery