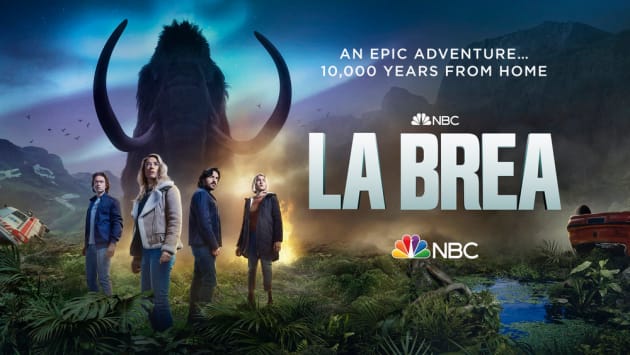 When La Brea Season 1 ended, Josh and Riley had accidentally entered a portal, and Gavin, Izzy, and Ella landed in prehistoric Seattle.

We had the pleasure of chatting with showrunner David Appelbaum and the cast of La Brea about upcoming Season 2 storylines. Check out the interviews below.

David also teased that the characters will have to deal with a new group of villains called the Exiles.

When asked how they would split the 14 episodes, David commented that it was a vast storyline arc with a midseason cliffhanger. Part two will return in January 2023.

Jack Martin teased that he couldn’t think of a better timeline than 1988 for two characters on the verge of romance, especially now that Josh and Riley live independently.

Both actors teased while they longed to return to their families that they loved being in civilization without dealing with prehistoric creatures and the elements.

When asked if any decisions they made in 1988 would affect other timelines, Jack teased that was a central part of the upcoming storyline and Pandora’s Box.

Natalie Zea and Nicholas Gonzalez discuss how the realization that Gavin and Isaiah are the same people affects their relationships or if they’re just instantly thrown back into chaos and survival mode.

Eoin Macken teased how he copes with issues when he drops into prehistoric Seattle, from surviving to dealing with Izzy and Ella to his problems with Levi. When asked if there was a full-blown love triangle coming, all three actors responded enthusiastically.

Eoin said the three loved working together, while Natalie appreciated that she got to interact more with Eoin in Season 2. Nicholas teased that besides the triangle, Eve and Levi’s relationship grows in 10,000 BC now that Josh is missing, and it feels like it’s them against the world.

The actors teased their favorite parts of Season 2, including new civilizations of people opposed to them.

Jon Seda discussed how Sam is coping after watching Riley disappear through the portal and if this will trigger his anxiety and PTSD since she’s been his anchor.

Zyra also discussed father and daughter relationships, and how Gavin and Izzy’s relationship evolves in Season 2 as he realizes, Izzy has matured as they learn survival skills in 10,000 BC.

Zyra also teased that it will be a hugely emotional moment when the Harris family reunites, especially since Izzy has wanted her family back together for so long.

Both actors shared why they thought La Brea was relatable to so many viewers since it encompasses family relationships, strangers that become like family, and cool sci-fi effects.

Will you tune in to watch La Brea Season 2?

What adventures are you excited to see?