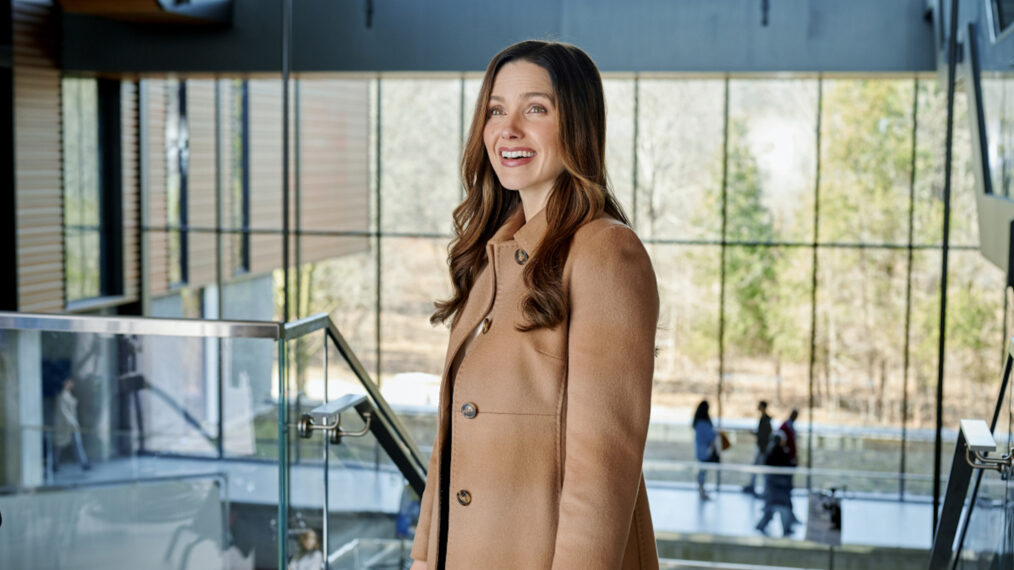 [Warning: The below contains MAJOR spoilers for the Good Sam Season 1 finale “To Whom It May Concern.”]

Good Sam‘s “To Whom It May Concern” also sees some competition for the position of CMO (chief medical officer), with the board considering both Vivian Katz (Wendy Crewson) and her (temporary?) replacement Rhonda Glass (Yanna McIntosh) for the position. Plus, Sam may have to say goodbye to one of her team (and her ex), Caleb Tucker (Michael Stahl-David). So where did the finale leave everyone as we wait to hear about a possible second season? Read on to find out.

While Sam’s getting positive press with the Griffith Technique, she and Griff vehemently disagree about who exactly should be getting credit for it. He came up with the idea, while she modified it. But while Griff feels like he nailed his final interview with the board, soon after, Malcolm Kingsley (Edwin Hodge) informs Sam that she’s the new permanent chief. Now, she can do things her way, he says.

Meanwhile, Vivian wants Griff to focus on their daughter’s remarkable achievement, though he thinks it was a mistake. Get in line and accept it, she tells him. Will she do the same if the board chooses Rhonda? “It’s not why we built this place into what it is, let other people run it, that was never our plan,” Griff reminds her. “That plan has changed. Things change,” she says. She’ll accept the outcome, and that’s what he needs to do, too.

Griff does congratulate Sam as she’s speaking with the team, but after, he tells her she can focus on the department, while he’ll focus on his legacy. “Chiefs come and go, but the Robert Griffith technique will outlive us both and inspire generations to come,” he says. As Rhonda warns Sam, “Your father is not going to go quietly into the night.” And so begins the fight over the technique. In the end, Sam agrees to surrender it to him, as part of a sale to Fletcher Pharmaceuticals, if her half is used to benefit the hospital, with part of the profit going to the expansion of her residency team. Sam’s been too busy to write Caleb the letter of recommendation for the job at Boston Harbor Memorial Hospital. She doesn’t have to, he says, and it’s later that she learns, from Rhonda, why: He already got the job. They made him a good offer, and he couldn’t say no, he explains to her. “We just couldn’t get the timing right, could we?” she says, and yes, they did try “a lot.”

Dr. Lex Trulie (Skye P. Marshall) catches Caleb leaving the hospital with a box of his things; he’s packing little by little to keep it from becoming a big thing. How’d Sam take it, Lex wants to know. Fine, he says. That’s why he has to go. He can’t be there anymore with someone who doesn’t feel the same as he does. However…

Will Sam Choose Caleb or Malcolm?

Upon reading the letter of recommendation Sam did write for Caleb, Lex realizes, “It’s a love letter.” Sam denies it, but to her best friend, it’s clear. Why didn’t she tell him if this is how she feels? Trying to make him stay wouldn’t be fair, Sam explains. “What’s not fair is not telling him how you feel and keeping the truth from him. I speak from experience,” Lex argues. “It’s time to move on,” Sam insists. But Lex leaves that letter of “recommendation” in Caleb’s locker for him, while Sam goes to Malcolm for a do-over. “I’m asking you out on a date, an official do-over first date tonight,” she says. “Do you accept?” He does. That means that both men show up at Sam’s at the same time (Malcolm with wine, Caleb with roses), and they wait at her door to see what she’ll say. (She’s a bit busy with Griff’s most recent move.)

Can Dr. Joey Costa (Davi Santos) and Tim (Stephen Tracey) move past the latter’s cheating? It would help if they spent time together outside of a supply closet in the hospital and Joey went home at night. Soon, Tim has enough and reminds Joey that he put what happened in Vermont behind them when they had to leave. He never brought it up or held it over Joey because he loves him, Tim says, because he knows they all make mistakes. Joey refuses to talk about that at the hospital. Tim admits he was with Dr. Eric Kace (Travis Van Winkle) because he wanted to feel special instead of just part of the furniture. If Joey’s giving up on their future, why is Tim carrying that secret around for him?

Vermont comes up again in a later conversation as well. Joey says he can get over the cheating, “but if what made you cheat is me putting my career first, that will never change.” And unfortunately for him, Dr. Isan M. Shah (Omar Maskati), who’s angry because Joey didn’t pass off a cool surgery like he promised, overhears. “Even after what you did in Vermont?” Tim asks. “After I’ve been covering for you?” And so later, Isan goes to Joey and reveals he did some research, made some calls, and checked out medical records. Now, he knows why Joey left his first residency program, and if he doesn’t want anyone else to know, he’ll have to answer to Isan. Is There a New Romance in Lex’s Future?

Lex’s clashes with Dr. Nick Vega (Gerardo Celasco) do lead to the inevitable kissing in a supply closet, after Eric advised him that she’s “worth it” not “trouble” as he thought. But while they both agree that “words just complicate things,” Lex quickly hits the “stop,” or rather “pause,” button. “I can’t go there with my boss, not again,” she tells Vega. However, in a couple years when she’s his boss, they can revisit this, she offers on her way out of the room.

The board agrees not to hold covering up Griff’s DUI against Vivian, but the members also like that Rhonda, who’s been filling in as CMO, is a practicing surgeon. But that’s also what keeps Rhonda from attending a meeting. So, Griff offers a third option, while toasting to the Robert Griffith Technique with Byron Kingsley (Evan Parke). And Sam and Vivian find out that Griff is the new CMO when he pours champagne to celebrate. He stole the job, his daughter argues. Was he planning this the entire time, his ex-wife wants to know. He doesn’t even know what the job entails! As Griff sees it, “department is yours, but Lakeshore? Lakeshore belongs to me now,” he tells Sam.

That leaves Vivian with the question of what she wants to do next. For now, she at least seems to know that she wants to try to get Dr. Asher Pyne (Sendhil Ramamurthy) back after her husband saw her with her ex.

Meanwhile, Sam’s ready to once again face off with her father. After all, something did have to put them at odds for a potential Season 2. “I beat you once already, Dad, and that was for a job you’re actually qualified for. I will beat you again,” she tells him. She already has a win over him that he didn’t realize: The patent filed by Fletcher Pharmaceuticals was for the Samantha Griffith Technique, and the paperwork’s in. He’s going to fight her on it. “I’m ready for it. This hospital’s not yours, Dad,” she says. “It belongs to all of us, to all of the people inside, and those people will stand with me.” And she leaves with him with a “white flag” for his eventual surrender, advising him, “Keep it close. You’ll need it soon.”