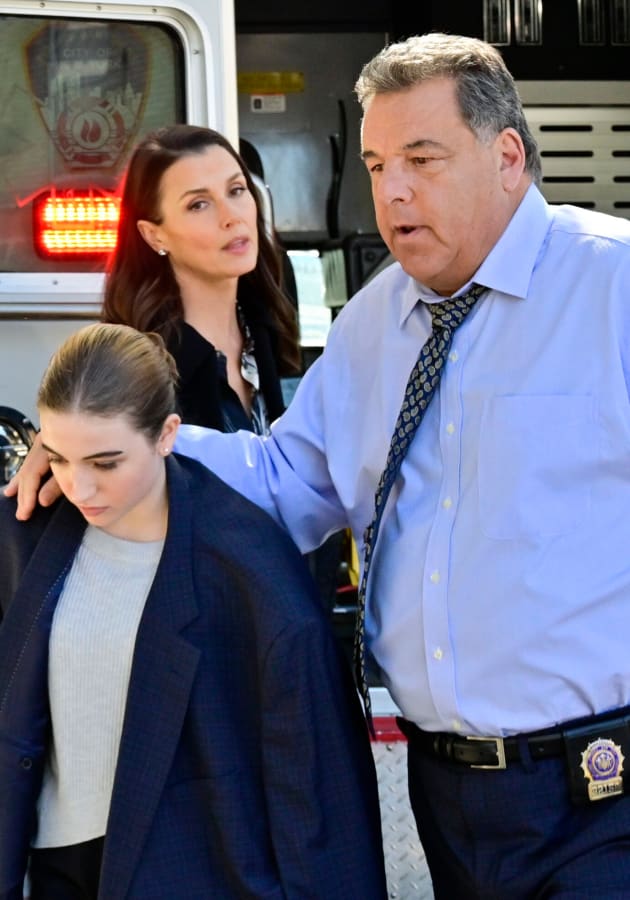 Even people who dislike the police often concede that they have a difficult job.

Cops are expected to make split-second decisions; they often have to choose between risking their lives and harming innocent people while in a high-stress situation.

On Blue Bloods Season 13 Episode 7, Frank and Garrett grappled with whether that expectation extends to officers being obligated to put their lives on the line while off-duty.

This one has no clear-cut answers. Frank had good reasons for believing that Hayes was not cut out to be a patrol officer, yet Hayes didn’t break any rules.

Could Hayes have saved lives by trying to intervene in the robbery? Maybe, but it might also have escalated the situation.

The robber didn’t start shooting until a waitress startled him, suggesting that, at least initially, laying low was the right move.

Once he started shooting, I’m not sure who you thought you were protecting by continuing to stand by.

Frank pointed out that everything changed when the robber began firing at random people. At that point, it wasn’t a robbery — it was an active shooter situation. Theoretically, cops should be trained to disarm perps in these situations.

Active shooter situations happen so frequently in the United States that it feels like we’re perpetually at war; citizens would like to believe that if a cop were ever involved in such a situation, that cop would help resolve things whether or not they were on duty.

Frank saw Hayes as being derelict in his duty even though he didn’t break any rules.

On the one hand, Hayes was armed and trained to stop an active shooter, so he could have made a difference. On the other, it’s unlikely that he would have been able to stop the shooter without backup. If he’d tried, he might have sacrificed his life for nothing.

He didn’t ignore the situation; he did the bare minimum to resolve it. If he’d been an ordinary citizen, it would have been an act of bravery, but because he was a cop, he was seen as a coward.

Cops see so much horrible stuff on the job that it’s understandable that Hayes wouldn’t want to risk his life when off duty. But it wasn’t as if he could relax while a robber was shooting up the place.

He didn’t want to risk his life, and Frank found that unacceptable. His decision to transfer Hayes to a less desirable assignment made sense; after all, if Hayes couldn’t be trusted to intervene in a robbery if it meant risking his life, how could his patrol partner trust him to have their back?

Garrett’s insistence that Frank looked down on him for not being a cop was aggravating. Garrett felt that way because all the cops in the room thought that Hayes’ behavior was cowardly, while the one non-cop looked only at the letter of the law and didn’t see the issue.

Frank didn’t leave Garrett out of his meeting with Hayes because he didn’t want a non-cop’s opinion. Garrett had made it clear that he was angry at Frank’s refusal to go along with his opinion, so what good would it have done for Garrett to know about that meeting?

We finally got an explanation for why Danny has been so nasty to Jamie lately.

Danny didn’t just come off as an ass to Jamie; he seemed that way to the audience until he explained the real issue to Baez.

It made sense that he didn’t want to be responsible for losing another brother in the line of duty. But Baez was right — he needed to explain that to Jamie.

Danny stopped short of doing that with his weird non-apology that was meant to be an apology. Erin and Jamie teased him, so all is well for now, but it will keep coming up until Danny resolves this issue.

The case itself was strange and resolved too quickly. Grace’s boyfriend’s motive for conspiring to commit robbery was ridiculous. It didn’t work any better for him than it would if someone tried it on Days of Our Lives.

Grace also looked too similar to the girl from Alburquerque who got shoved in front of a car; I kept mixing these two cases up.

Eddie’s determination to help the tourist was typical of her. But I was surprised by the happy ending.

The girl hated New York after becoming a victim of a violent crime, so why did she hole up in her hotel room for days on end instead of going home?

It also seemed odd that she agreed to go on a city tour with Eddie and Badillo when she didn’t want anything to do with the Big Apple after her attack. It felt like she went from agoraphobic to fine as soon as the cops offered to take her to the Statue of Liberty.

It was a nice moment, but it was a bit rushed.

Erin and Anthony’s conflict was the most compelling part of the hour.

I’m not generally a huge fan of Erin, but Anthony’s insistence that she only cared about closing the case was beyond insulting. He couldn’t think clearly because of his fear for his daughter.

If this had been a witness who wasn’t related to either of them, Anthony would have been pressing as hard as Erin to get Sophia to cooperate.

Erin didn’t want her testimony solely to get a win. She wanted the win to get a dangerous criminal off the street. And Anthony should have known that.

Erin spent most of the episode standing up to Anthony. I’m glad she called him out on his nonsense and insisted Sophia testify.

Sophia is not a baby, and she should have had some say in whether she testified. Giving her back that control could help her move forward after the trauma of witnessing her teacher’s murder.

What did you think, Blue Bloods fanatics? Hit the big, blue SHOW COMMENTS button and let us know. And don’t forget you can watch Blue Bloods online.