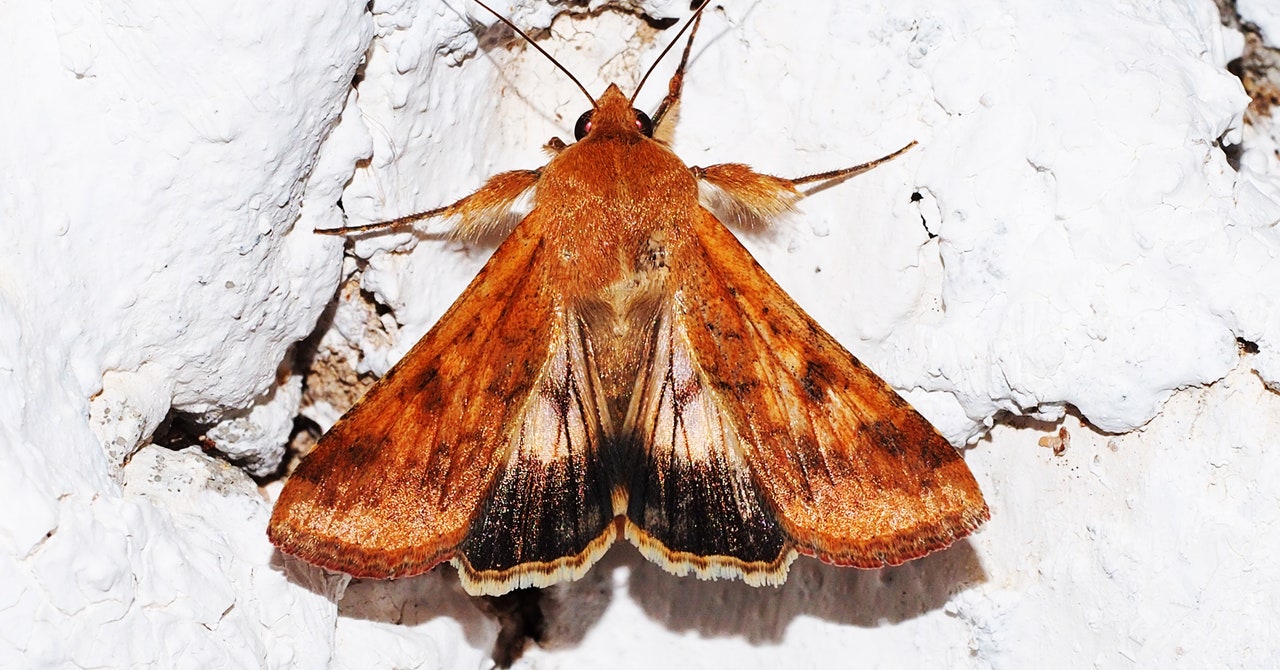 Proving that this way of producing pheromones works, and that they’re effective, has taken almost a decade. “We are now looking at scaling up the process and introducing them in the market,” says Löfstedt. This research also opens the door to using sex disruption to protect other commodity crops from pests. “It should be possible to use the pheromones also in sugarcane and soybean production,” says Löfstedt.

The beauty with pheromones is that they don’t kill insects, but instead just influence their behavior. This makes them more environmentally friendly than pesticides, which often wipe out many species that aren’t the target, explains Srinivasan Ramasamy, a lead entomologist at the nonprofit World Vegetable Center. Pesticides are commonly found in soil, air, water, and on non-target organisms in our ecosystems. They can harm plants and animals, ranging from beneficial soil microorganisms and insects—such as bees, pollinators, spiders, and mites—to plants, fish, birds, and other wildlife.

Insects also distinguish whether a pheromone signal is from their own species, meaning you can target the life cycle of specific pests while leaving other insects unaffected. “Specificity is a very clear feature of the pheromones system,” says Wang.

It’s not only good news for a lot of bugs out there, but also farmers and consumers. Insect pheromones are not toxic to humans, which is a real benefit for agricultural workers. “It has been demonstrated that conventional insecticides have a negative impact on, for instance, the fertility of farm workers,” explains Löfstedt. Some pesticides target bodily systems in insects that share physiological similarities with those in humans, such as neurotransmitters. “When you are exposed to the pesticides, they can impact your physiology,” says Ramasamy.

And importantly, insects don’t evolve resistance to their own communication signals, says Löfstedt, whereas they do to pesticides. Repeated use of a pesticide family commonly leads to insects adapting and no longer responding to those same chemicals, meaning higher and higher doses are needed to have an effect—with dire environmental consequences.

But even if the technique were scaled up, there will be limits to how it can be used. Cooperation between neighboring farmers is also key, as mating disruption works best if large areas are treated. Female pests may mate outside the fields, and travel later and lay eggs. “It’s usually not very successful to treat a home garden with pheromones,” says Löfstedt.

There’s regulation to overcome too. The fact that it’s a genetically modified (GMO) technology could prove a major roadblock and also drive up costs, Ramasamy warns. “In most countries, the production of GMOs may not be very expensive, but the regulatory dossier they have to undergo needs a lot of investment,” he says. In fact, stringent rules on using GMOs in Europe could mean the continent misses out on these products, Löfstedt says.

Finally, there are biological limits to how widely pheromones can be used as well—they’re not an option for all pests. “Not all insects have sex pheromones,” Löfstedt explains, and some that do produce complex compounds that are not straightforward to bioengineer. In some cases, the sex pheromone is made up of two or three compounds. “Then you need to have two or three genetically modified plants to be produced and put under the regulatory mechanism,” Ramasamy says.

The reality is that for agriculture to be sustainable, it may need to involve a mix of pest control techniques—such as botanical pesticides made from fungi or viruses and pest-resistant plant varieties, used together with engineered pheromones. But for now the pest control competition is fierce: Pesticides are easily available, easy to apply, take care of multiple insects, and are relatively cheap. “If we go with five different components in an integrated pest-management program, then the farmers are going to say, ‘No, sorry,’” says Ramasamy. The key will be to find a sustainable solution that also keeps things simple, he suggests.

Löfstedt is adamant, though, that plant-grown pheromones can be a big part of pest control in the future. “It’s green chemistry, driven by solar energy,” he says—yet another plus point. If we want to be sustainable and protect wildlife, crops, and human health, then we need to find pest control methods like this that can realistically be scaled up so that pesticide use falls—and make sure it happens. It’s up to us to “use biological knowledge, and the different control methods, in a biologically sensible way.”