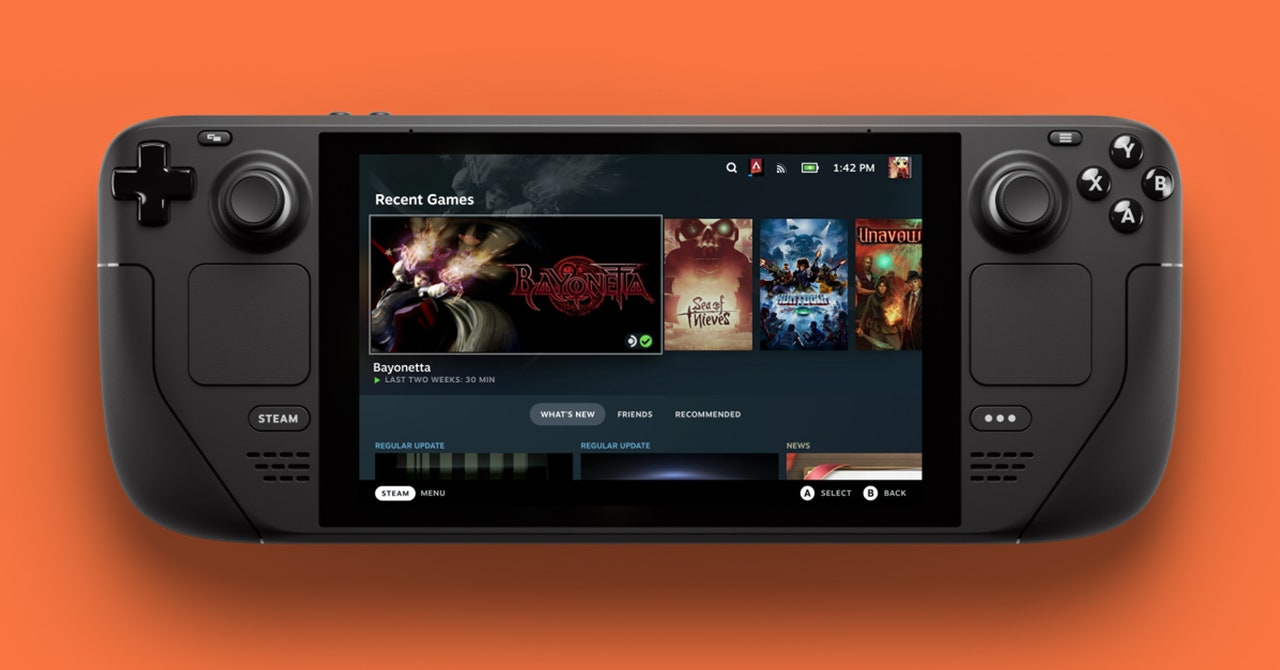 A year ago, when Valve announced the Steam Deck, I was absolutely riveted. I’m not a PC gamer—after eight to 10 hours of work each day, the last thing I want to do is be at a desk—but this new device offered something different: the ability to play PC games on a handheld. Prior to its arrival, anyone who wanted to play such games on-the-go had to hope they were available on Nintendo’s Switch. The Steam Deck offered an appealing alternative, one that lets players port their games from Steam onto a handheld and take them anywhere.

So I ordered one. Or at least, I attempted to. Like so many others, I logged on to Valve’s website when reservations opened in July 2021 and was promptly met by website crashes. Eventually I was able to reserve one, but when I finally got the email inviting me to purchase the device (a year later), I hesitated.

I’d read the reviews. I’d done the research. I knew what the device’s capabilities were and what they weren’t. It’s not just a handheld console—it’s a PC that sometimes requires workarounds and tweaks for things to function properly. It’s also a device without a mouse or keyboard that’s meant to play games that require a mouse and keyboard. It’s got a short battery life. (This last shortcoming was actually a bonus for me. Short battery life can function as a built-in time-limiter.)

Ultimately though, my hesitation wasn’t about the Steam Deck’s functionality. It stemmed from a cost-benefit analysis. There are some people picking up the Deck who have a huge back catalog of Steam games, who will buy this thing and play it all the time. That’s not me. I’m getting less and less video game time as it is, which is why I’m relying increasingly on mobile gaming. Meanwhile, it’s not an inexpensive device. I felt incredibly guilty splurging on something I knew I’d only use occasionally. But then I realized: I don’t have to use something all the time for it to be valuable to me.

Often, the benefit in my cost-benefit analyses is one of time. But that logic doesn’t actually hold up—I bought Horizon Zero Dawn on sale for $15 and I paid full price for Horizon Forbidden West. I love both these games equally. What matters to me is how much enjoyment I get out of something, not necessarily how much it costs—and sometimes you can get as much enjoyment in two hours as you can in 20. Sure, it’s nice to get a good deal, but that’s not what matters in the long run.

Of course I don’t want to pay a lot of money for something I know I’ll never use. But it also doesn’t have to be “must-have.” It’s all right to splurge on a “would be nice” every once in a while, as long as it’s within what I am fortunate enough to be able to afford.

And you know what? I’ve played the Steam Deck every single day since it arrived. Sometimes it’s only for 15 minutes while I eat lunch, but it’s so great to have that option. I didn’t realize how lovely it would be to have Garrus Vakarian with me wherever I went. (Yes, Mass Effect: Legendary Edition works wonderfully for me on the Deck, and you all know how I feel about replaying that game.)

Will the Steam Deck become my go-to platform? No, that will always be a PlayStation. But it doesn’t need to become my one and only. If you’re on the fence about splurging on a Steam Deck for similar reasons, I’m giving you the permission you don’t want to give yourself. It doesn’t have to be necessary to be worth it.