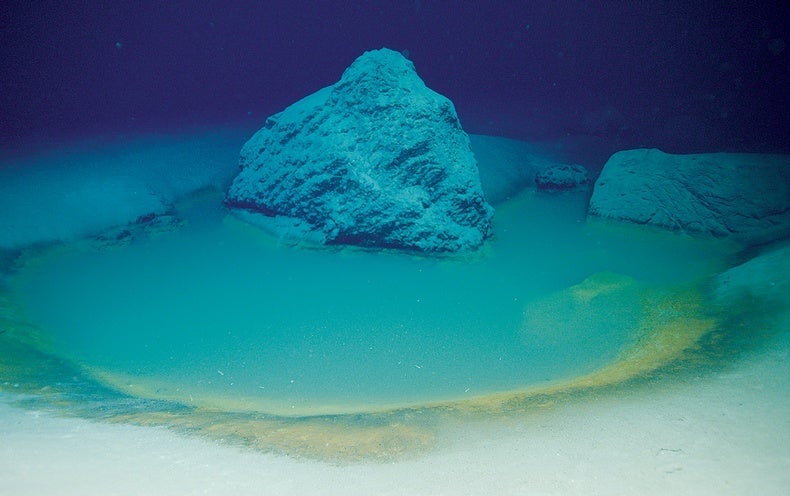 A brine pool is a rare and bizarre anomaly of nature: water so dense with salt that it won’t mix with seawater and forms a clearly defined “lake” on the ocean floor, becoming a toxic environment where few organisms survive. Now researchers have discovered a unique brine pool in an arm of the Red Sea that preserves sediments revealing a pristine, 1,000-year history of flash floods, tsunamis and earthquakes.

Brine pools form in places where a sea was cut off from other oceans in the deep past and evaporated, leaving behind subsurface salt deposits. The newly found pool, situated in the Gulf of Aqaba between Saudi Arabia and Egypt, is the closest to shore of any known brine pools in the Red Sea. Because it is just 1.2 miles from land, it has trapped sediments from the coast for centuries—and its salty hostility to life inhibits biological disturbances.

“Any sedimentary layers that are laid down at the bottom of the brine are exquisitely preserved,” says University of Miami marine geologist Sam J. Purkis. “Nothing touches them.”

Purkis and his colleagues discovered the pool in 2020, using a remotely operated vehicle during a research mission run by the nonprofit OceanX. The briny water looks like an eerie haze, outlined by a rind of salt-loving microorganisms around the pool’s perimeter. Despite its inhospitability, shrimp and eels lurk around the pool’s edges, darting briefly into the ultrasalty water to snag small creatures that have ventured in and been stunned by the brine.

So far the researchers have drilled 1,200 years’ worth of sediments from the floor of the pool. “It’s the memory of the experiences of that place,” says Beverly Goodman Tchernov, a marine geoscientist at the University of Haifa, who was not an author on the study.

The sediment layers include muddy, silty deposits from roaring rivers called wadis that form in the desert during once-every-quarter-century rains. One layer, dating back about 500 years, may correspond to an underwater landslide that Purkis and his team previously discovered remnants of in the Red Sea.

The team also found coarse sediments likely transported by tsunamis. A relatively recent layer may be related to a 1995 magnitude 7.2 earthquake, which caused 13-foot waves in an Egyptian port town. Examining the sediments suggests that similar tsunamis caused by earthquakes or landslides may occur about every 100 years, the researchers reported in Communications Earth & Environment.

The northern coast of the Red Sea has long been sparsely populated, Goodman Tchernov says, but that is changing rapidly. Drawing on his brine pool findings, Purkis has talked with Saudi Arabian officials about the geological risks of building in that region. “The key here,” he says, “is awareness and planning.”