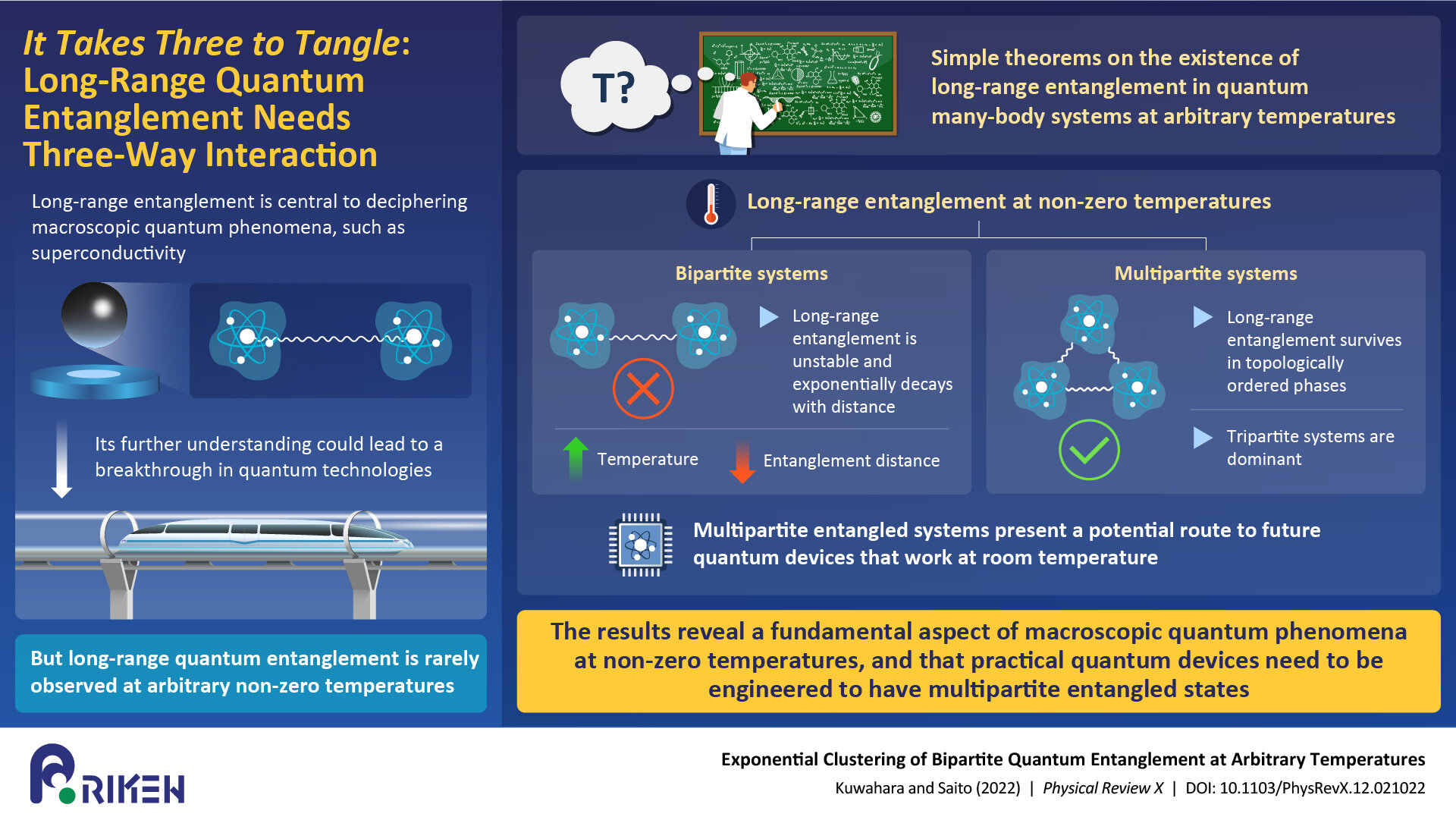 A theoretical study shows that long-range entanglement can indeed survive at temperatures above absolute zero, if the correct conditions are met.

Quantum computing has been earmarked as the next revolutionary step in computing. However current systems are only practically stable at temperatures close to absolute zero. A new theorem from a Japanese research collaboration provides an understanding of what types of long-range quantum entanglement survive at non-zero temperatures, revealing a fundamental aspect of macroscopic quantum phenomena and guiding the way towards further understanding of quantum systems.

When things get small, right down to the scale of one-thousandth the width of a human hair, the laws of classical physics get replaced by those of quantum physics. The quantum world is weird and wonderful, and there is much about it that scientists have yet to understand. Large-scale or “macroscopic” quantum effects play a key role in extraordinary phenomena such as superconductivity, which is a potential game-changer in future energy transport, as well for the continued development of quantum computers.

It is possible to observe and measure “quantumness” at this scale in particular systems with the help of long-range quantum entanglement. Quantum entanglement, which Albert Einstein once famously described as “spooky action at a distance,” occurs when a group of particles cannot be described independently from each other. This means that their properties are linked: if you can fully describe one particle, you will also know everything about the particles it is entangled with.

Long-range entanglement is central to quantum information theory, and its further understanding could lead to a breakthrough in quantum computing technologies. However, long-range quantum entanglement is stable at specific conditions, such as between three or more parties and at temperatures close to absolute zero. What happens to two-party entangled systems at non-zero temperatures? To answer this question, researchers from the RIKEN Center for Advanced Intelligence Project, Tokyo, and Keio University, Yokohama, recently presented a theoretical study in Physical Review X describing long-range entanglement at temperatures above absolute zero in bipartite systems.

The researchers’ findings are consistent with previous observations that long-range entanglement survives at a non-zero temperature only when more than three subsystems are involved. The results suggest this is a fundamental aspect of macroscopic quantum phenomena at room temperatures, and that quantum devices need to be engineered to have multipartite entangled states.

“This result has opened the door to a deeper understanding of quantum entanglement over large distances, so this is just the beginning,” states Keio University’s Professor Keijo Saito, the co-author of the study. “We aim to deepen our understanding of the relationship between quantum entanglement and temperature in the future. This knowledge will spark and drive the development of future quantum devices that work at room temperatures, making them practical.”

While quantum devices that work at stable room temperatures are still in their infancy, quantum entanglement looks set to “bind” the future of this field.