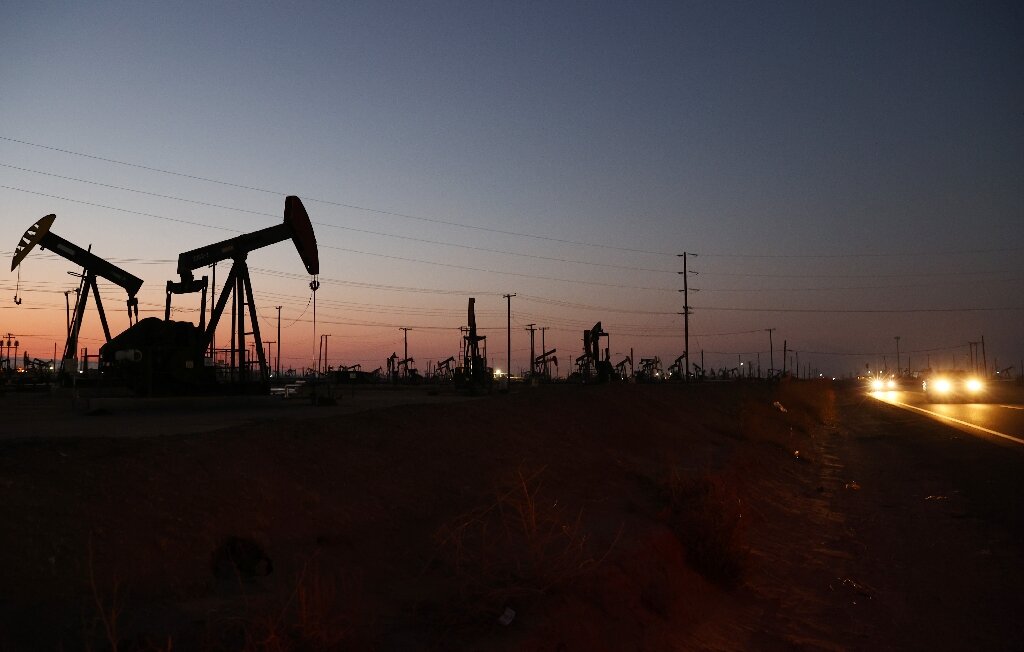 Cars pass near pumpjacks in the Belridge oil field near McKittrick, California; oil and gas production is a major source of methane emissions.

For the second year running, US scientists observed record increases in the atmospheric concentration of the potent greenhouse gas methane, the National Oceanic and Atmospheric Administration (NOAA) said Thursday.

Methane, the second biggest contributor to global warming after carbon dioxide, is generated by the production, transport and use of fossil fuels, but also from the decay of organic matter in wetlands, and as a byproduct of ruminant digestion in agriculture.

At last year’s COP26 Climate Change Conference in Glasgow, participants agreed to a Global Methane Pledge to reduce methane emissions by 30 percent by 2030—but notable emitters including China, Russia, Iran and India have not signed on.

“Our data show that global emissions continue to move in the wrong direction at a rapid pace,” said NOAA administrator Rick Spinrad in a statement.

The annual increase in atmospheric methane during 2021 was 17 parts per billion (ppb), the largest rise recorded since systematic measurements began in 1983, said NOAA.

“We can no longer afford to delay urgent and effective action needed to address the cause of the problem—greenhouse gas pollution,” Spinrad warned.

It’s estimated about 30 percent of methane comes from fossil fuel production—making it a clear target for lessening the impacts of the climate crisis in the short term.

NOAA found that the global surface average for carbon dioxide during 2021 was 414.7 parts per million (ppm), which is an increase of 2.66 ppm over the 2020 average.

Atmospheric levels of carbon dioxide are now comparable to where they were 4.3 million years ago, during the mid-Pliocene epoch.

At that time, the sea level was about 75 feet (23 meters) higher than today, the average temperature was 7 degrees Fahrenheit (4C) higher than pre-industrial times, and large forests occupied areas of the Arctic.

Methane is far less abundant but around 25 times more potent than carbon dioxide at trapping heat in the atmosphere.

The “atmospheric residence time” of methane is approximately nine years, compared to thousands of years for carbon dioxide—therefore controlling methane is critical to influencing the rate of climate change in the near future.

Methane also contributes to the formation of ozone at the ground level, which in turn is the main ingredient in smog and has harmful effects on the environment and people’s health.

Previous NOAA methane research indicated that biological sources of methane—such as from wetlands—are the main driver of increasing methane post-2006.

This is worrying because it may signal a feedback loop caused by more rain over tropical wetlands, which in turn generates yet more methane—a cycle that would become largely outside of human control.

Facebook
Twitter
Pinterest
WhatsApp
Previous articleWe’re Creating a Sustainable Collection, and We Need You to
Next article‘Good Sam’: How the Finale Set Up a Potential Season