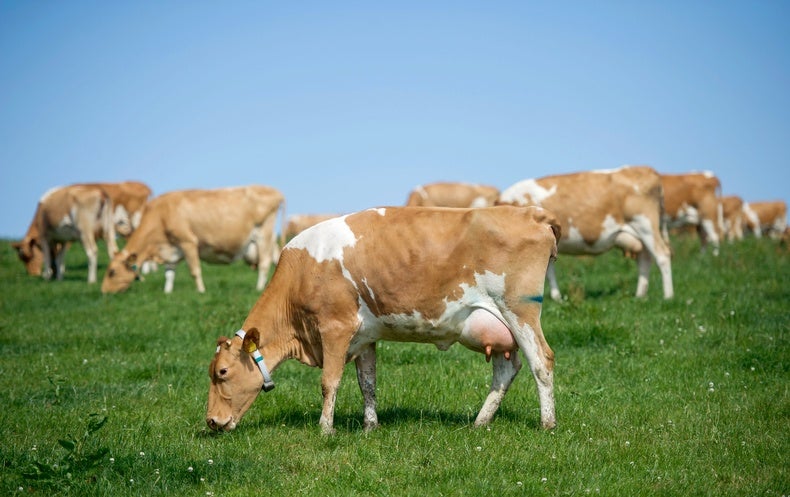 The dawn of dairy farming in Europe occurred thousands of years before most people evolved the ability to drink milk as adults without becoming ill. Now researchers think they know why: lactose tolerance was beneficial enough to influence evolution only during occasional episodes of famine and disease, explaining why it took thousands of years for the trait to become widespread1.

The theory — backed up by an analysis of thousands of pottery shards and hundreds of ancient human genomes as well as sophisticated modelling — explains how the ability to digest milk became so common in modern Europeans, despite being almost non-existent in early dairy farmers. This ability, known as lactase persistence, comes from an enzyme that breaks down milk sugar and usually shuts down after young children are weaned.

The study, published in Nature on 27 July, is the first major effort to quantify the forces that have shaped this trait, says Shevan Wilkin, a molecular archaeologist at the University of Zurich, Switzerland. “Lactase-persistence evolution was much more complicated than we ever thought.”

The ability to digest milk evolved independently in ancient populations around the world. Researchers have mapped the trait to gene variants that instruct cells to produce high levels of lactase. The variant that most people of European ancestry carry is one of the strongest examples of natural selection on the human genome.

Yet scientists have struggled to explain the forces underlying the high prevalence of lactase persistence in Europe. Many had presumed that the variation proved beneficial only after ancient peoples started routinely consuming dairy products. Another influential theory held that the early cows, goats and sheep — domesticated around 10,000–12,000 years ago — were used mainly for their meat, and that milk consumption followed millennia later.

But Richard Evershed, a biogeochemist at the University of Bristol, UK, who co-led the latest study, and his team have found milk-fat residues on ancient potsherds dating from the dawn of animal domestication. Ancient genomics studies, meanwhile, showed that these early animal farmers were lactose intolerant, and that tolerance for milk did not become common in Europe until after the Bronze Age, 5,000–4,000 years ago.

To determine the probable forces behind Europeans’ ability to digest milk, a team led by Evershed and two Bristol colleagues, chemist Mélanie Roffet-Salque and epidemiologist George Davey Smith, together with Mark Thomas, an evolutionary geneticist at University College London, collated archaeological and genomic data. They then modelled how various factors, such as the use of dairy milk and population size, explained the rise of lactase persistence, drawing on the genomes of more than 1,700 ancient Eurasian people.

The team found little overlap between leaps in lactose tolerance and heightened milk consumption, inferred by the presence of milk-fat residues from some 13,000 potsherds from more than 550 archaeological sites across Europe. “All previous hypotheses for what was the natural-selection advantage of lactase persistence pegged themselves to the extent of milk use,” says Thomas, because of the presumed nutritional benefits of being able to consume milk without getting sick.

With that idea scotched, the researchers looked at how lactose tolerance relates to milk drinking in modern Europeans. In the UK Biobank, a repository of health and genomic data from half a million people in the United Kingdom, they found little correlation between milk consumption and lactose tolerance, with 92% of lactose-intolerant participants preferring fresh milk over alternatives. And lactose tolerance showed no clear health or fertility benefits, which might drive natural selection.

This suggests that, for most lactose-intolerant people, the costs of drinking milk aren’t that high today, Thomas says — and probably weren’t in ancient times, either. “If you’re healthy, you get a bit of diarrhoea, you get cramps, you fart a lot. It’s unpleasant, but you’re not going to die.”

But the researchers propose that the consequences of milk drinking among lactose-intolerant people long ago would have been much more severe for those who were in ill health, as a result of famine or infection. Fluid loss, through diarrhoea, contributes to deaths through malnutrition and infection, especially in places with poor sanitation. The researchers’ model found that lactase persistence was more likely to occur in ancient populations exposed to animal pathogens and famine than in those exposed to other factors examined.

The team proposes that natural selection for lactase tolerance was turbocharged during such periods, when lactose-intolerant individuals would have been more likely to die than people who lacked the suddenly beneficial gene variation.

“Are they right? I don’t know. It’s hard to say,” says Wilkin. Even if people didn’t die from the effects of lactose intolerance during hard times, it could have made them less likely to procreate than people who could digest milk, allowing lactose persistence to flourish. But she’s not sure that this fully explains why the trait is absent, or very rare, in early farming and some Bronze Age dairying populations, who must have been exposed to famine and infection.

Christina Warinner, a molecular archaeologist at Harvard University in Cambridge, Massachusetts, says that the study puts numbers on and provides evidence for a picture that has been emerging over the past decade. “Now we have some idea where we need to start looking.” One focus should be on ancient human genomes and other archaeological data from the medieval period and the Iron Age (3,000–1,000 years ago), when levels of lactose tolerance in Europe rose considerably.

Wilkin hopes that the study will also encourage researchers to reassess the evolution of lactase persistence outside Europe — for example, in Africa, where it evolved several times, and in Central Asia and the Middle East. Researchers also need a better grasp on how dairying and milk drinking can be widespread in places where lactose tolerance has never been common, such as the Mongolian steppe. “I really hope this kind of huge and really ambitious study spurs people to start investigating this,” she says.

This article is reproduced with permission and was first published on July 27 2022.