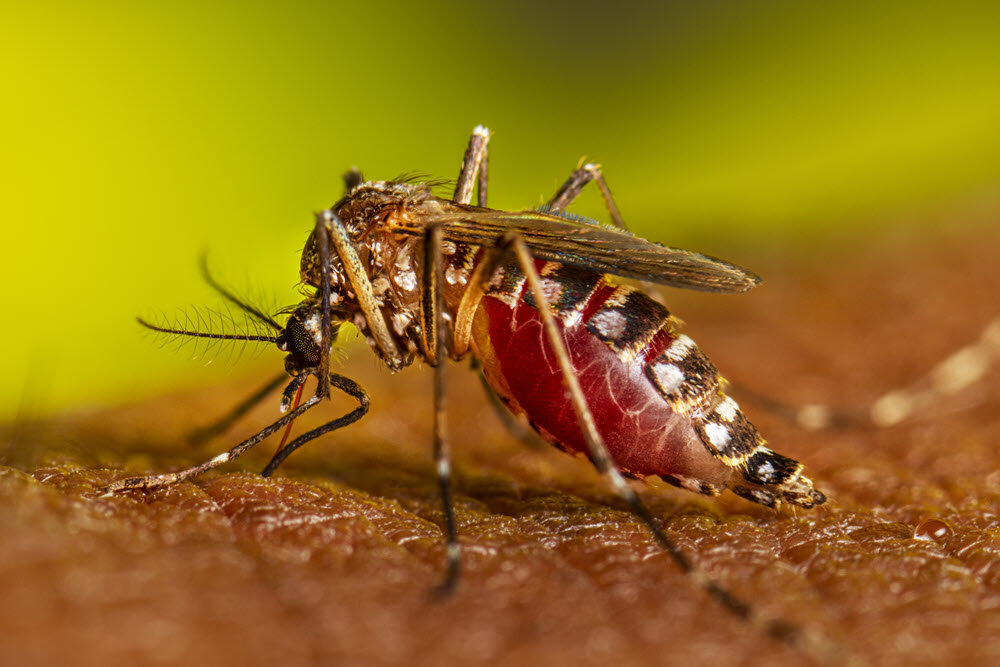 Mosquitoes that spread Zika, dengue and yellow fever are guided toward their victims by a scent from human skin. The exact composition of that scent has not been identified until now.

A UC Riverside-led team discovered that the combination of carbon dioxide plus two chemicals, 2-ketoglutaric and lactic acids, elicits a scent that causes a mosquito to locate and land on its victim. This chemical cocktail also encourages probing, the use of piercing mouthparts to find blood.

This chemical mixture appears to specifically attract female Aedes aegypti mosquitoes, vectors of Zika as well as chikungunya, dengue, and yellow fever viruses. This mosquito originated in Africa, but has spread to tropical and subtropical regions worldwide, including the U.S.

This new research finding, and how the team discovered it, is detailed in the journal Scientific Reports. “Though others have identified compounds that attract mosquitoes, many of them don’t elicit a strong, rapid effect. This one does,” said Ring Cardé, UCR entomologist.

Mosquitoes use a variety of cues to locate their victims, including carbon dioxide, sight, temperature, and humidity. However, Cardé’s recent research shows skin odors are even more important for pinpointing a biting site.

“We demonstrated that mosquitoes land on visually indistinct targets imbued with these two odors, and these targets aren’t associated with heat or moisture,” Cardé said. “That leaves skin odor as the key guiding factor.”

Given the significance of odor in helping mosquitoes successfully feed on humans, Cardé wanted to discover the exact chemicals that make our scent so potent for the insects. Part of the equation, lactic acid, was identified as one chemical element in the odor cocktail as long ago as 1968.

Since then, several studies have identified that carbon dioxide combined with ammonia, and other chemicals produced by humans also attract these mosquitoes. However, Cardé, who has studied mosquitoes for 26 years, felt these other chemicals were not strong attractants.

“I suspected there was something undiscovered about the chemistry of odors luring the yellow fever mosquito,” Cardé said. “I wanted to nail down the exact blend.”

Methods that chemists typically use to identify these chemicals would not have worked for 2-ketoglutaric acid, Cardé said. Gas chromatography, which separates chemicals by their molecular weight and polarity, would have missed this acid.

“I think that these chemicals may not have been found before because of the complexity of the human odor profile and the minute amounts of these compounds present in sweat,” said chemist Jan Bello, formerly of UCR and now with insect pest control company Provivi.

Searching for mosquito attractors, Cardé turned to Bello, who extracted compounds from the sweat in his own feet. He filled his socks with glass beads and walked around with the beads in his socks for four hours per odor collection.

“Wearing the beads felt almost like a massage, like squeezing stress balls full of sand, but with your feet,” said Bello. ‘The most frustrating part of doing it for a long time is that they would get stuck in between your toes, so it would be uncomfortable after a while.”

The inconvenience was worth the investment. Bello isolated chemicals from the sweat deposited on the sock beads and observed the mosquitoes’ response to those chemicals. In this way, the most active combination emerged.

Future studies are planned to determine whether the same compound is effective for any other mosquitoes, and why there is such variation in how individuals are apt to be bitten. “Some are more attractive than others to these mosquitoes, but no one’s yet established why this is so,” Cardé said.

Though this discovery may not lead to insights for the development of new repellants, the research team is hopeful their discovery can be used to attract, trap, and potentially kill disease-spreading mosquitoes.

“At the end of the day, we’re really pleased we found these compounds, because we weren’t always sure we would. We had a hunch they existed, but hunches don’t always work out,” Cardé said.

Why are some people mosquito magnets and others unbothered? Entomologist points to metabolism, body odor and mindset More information: Scientific Reports (2022). DOI: 10.1038/s41598-022-19254-w Provided by University of California – Riverside