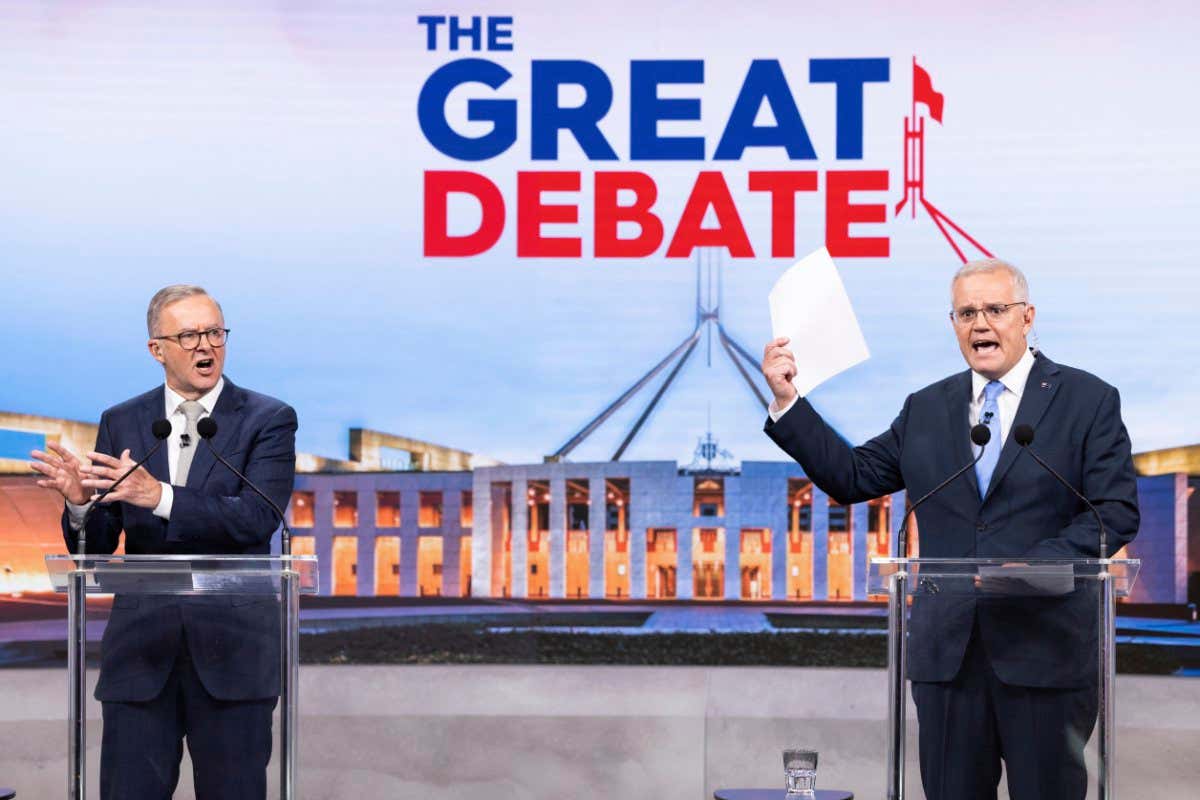 Australian election 2022: What will the outcome mean for the

Australia’s targets for cutting carbon emissions are among the weakest in developed nations, but a new government could accelerate the transition to renewable energy

Politicians Anthony Albanese and Scott Morrison in a televised leaders’ debate in Sydney, Australia, on 8 May

Climate change will be front of mind for many Australians when they vote in the federal election on 21 May, and the result could have global ramifications.

Extreme droughts, wildfires, floods and bleaching of the Great Barrier Reef in recent years have been a wake-up call for Australia, which has lagged behind other countries in moving away from fossil fuels. Two-thirds of people in Australia – where voting is compulsory – now believe that more needs to be done to address climate change.

The Liberal-National coalition of centre-right parties has dragged its feet on climate policy since coming to power in 2013. In October 2021, prime minister Scott Morrison finally bowed to international pressure to commit to net-zero emissions by 2050. But his government still has a 2030 emissions target of just 26 to 28 per cent below 2005 levels, which is one of the weakest among developed nations.

Morrison himself has been slow to accept the reality of climate change. As treasurer in 2017, he brought a lump of coal to parliament and announced: “This is coal. Don’t be afraid, don’t be scared, it won’t hurt you.” During Australia’s worst wildfires on record in 2019, he took a holiday to Hawaii, claiming “I don’t hold a hose”.

The Labor party, Australia’s opposition party, has pledged a more ambitious 2030 emissions reduction target of 43 per cent if elected. However, a target of 74 per cent below 2005 levels would be needed for Australia to contribute its “fair share” to keeping global warming within 1.5 °C, according to modelling by the University of Melbourne.

The Australian Greens party, which currently holds one of the 151 lower-house seats and nine of the 76 upper-house seats in parliament, is campaigning for a 2030 emissions reduction target of 75 per cent, and several independents have similar targets.

Meeting these targets would require significant changes. Despite having abundant sun and wind and the space for infrastructure, Australia has been slow to adopt renewable energy. Currently, 75 per cent of the nation’s electricity is derived from coal; by comparison, 41 per cent of the UK’s electricity was generated from fossil fuels in 2020.

“At the moment, our emissions are essentially flatlining; they’re not actually going down,” says Mark Howden at the Australian National University in Canberra. Powerful industry groups have stalled the transition away from fossil fuels, he says. Australia is currently the second largest exporter of coal and has the third largest reserves of coal in the world.

The Liberal-National coalition says it will reduce carbon emissions with “technology, not taxes” if re-elected. This will include investing in green hydrogen, which is supported by many leading scientists, but also some unproven technologies like carbon capture and storage.

The Labor party, led by Anthony Albanese, has proposed rolling out more solar and battery infrastructure, updating the electricity grid so that it can handle more renewable energy, making electric vehicles cheaper and investing in green hydrogen and green steel.

In terms of climate action, “the Labor policy is miles better than what the [Liberal-National] coalition is offering”, says Malte Meinshausen at the University of Melbourne.

Although Australia only contributes 1 per cent of the world’s carbon emissions due to its small population, the election result could still have a significant impact on the global climate, says Meinshausen. One reason why is that Australia has the resources to make green hydrogen and green steel on a large scale, which will be needed to help the rest of the world decarbonise, he says.

“If new leadership means that Australia becomes a renewable energy powerhouse, we could see a large stream of materials like green steel, green hydrogen et cetera being exported to the world market, which would enable energy transitions elsewhere,” says Meinshausen.

Sign up to our free Fix the Planet newsletter to get a dose of climate optimism delivered straight to your inbox, every Thursday

Facebook
Twitter
Pinterest
WhatsApp
Previous articleAstronomers question if the first picture of a black hole
Next articleFlowers in the Attic: The Origin’s Hannah Dodd Ponders Corrine’s