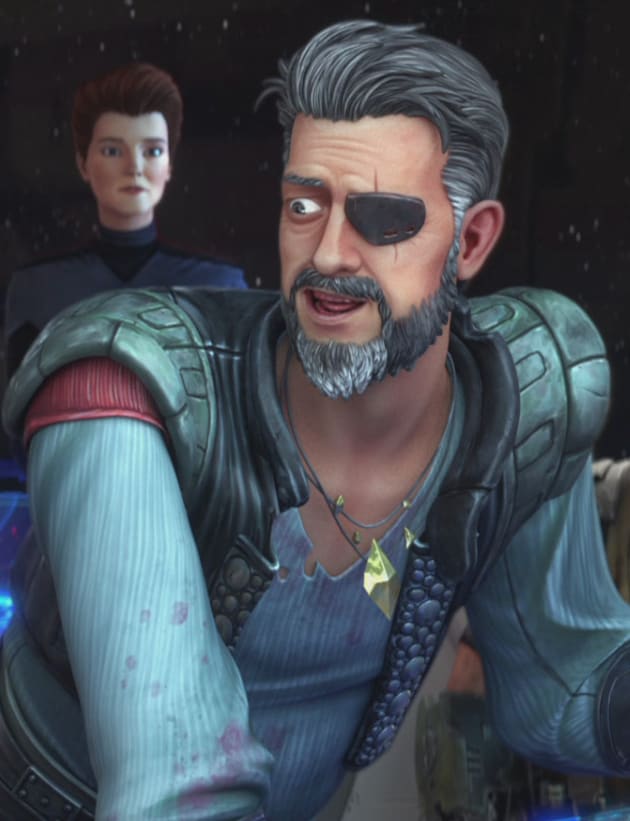 Hologram Janeway sets up the theme of Star Trek: Prodigy Season 1 Episode 15 when she warns Dal as he leads the away team down to Noble Isle, “If it’s too good to be true, it probably is.”

This ends up applying to individuals like Okona and Asencia, technology like Dr. Jago’s, and simplistic solutions like the orders given by Admiral Jellico (insert round of boos and hisses).

But the truth will out, and while the jury’s out on Asencia’s bomb of a reveal, our young crew feels stronger for Dal learning about his origins and Murf taking the literal next step in his development.

Also, who had a Romulan Tal Shiar hit squad on their bingo card? Were they on board the ship that halted the Dauntless? Or were they called in as soon as they intercepted Janeway’s message to Jellico about the Protostar?

First, an admiral. Now, a Romulan hit squad? Who are you guys?

Our little gang definitely knows how to make an impression.

I’m really enjoying the route the Protostar is taking to get back to the Federation. With the Enderprizian planet, Denaxi Depot, and now Noble Isle star port, we haven’t been so up close with non-Federation settlements since the Delta Quadrant days of Captain Janeway’s Voyager.

Noble Isle reminds me a bit of Deep Space Nine in its wild-frontier-meets-wilder-technology feel.

Dr. Jago is like a science-focused Ferengi in her single-mindedness. If the Rules of Acquisition could be applied to scientific advancement with no regulation or oversight, Jago would be Grand Nagus.

There’s a reason Starfleet has laws about scientific experimentation. If it’s too good to be true, it probably is.

With her eye for genetic modification, we don’t have to wait for Dal to present himself to Federation scientists to find out why his DNA is classified.

As a human augment, he’s a product of the Soong legacy.

Arik Soong, the disgraced geneticist Captain Archer recruited and ostensibly reformed in Star Trek: Enterprise Season 4, left acolytes who continued his experiments into genetic manipulation well after Soong claimed to have moved on to working on creating artificial life.

As a human augment, Dal’s existence is outlawed by the Federation, which banned genetic engineering in the aftermath of the Eugenics Wars.

This bodes poorly for Dal’s dream of joining Starfleet.

Dal’s already shown moments of insecurity and uncertainty regarding their mission and his own sense of self.

Okona’s maturity, confidence, and charisma only serve to heighten his shaky command confidence.

Y’know, for someone who’s been on our ship for such a short time, it stings that the crew’s taken to him so quickly. But I get it. I mean, look at him. He knows who he is. And what am I? Just some handsome, long-lost kid with questions. But, one day, I’ll find out where I came from.

It also doesn’t help to have a mind-reading crewmember with a poor verbal filter.

I’m sensing our captain is – what’s the expression? – utterly clueless.

So it’s not surprising that Dal takes Dr. Jago up on the implant. After all, she promises — even advertises that — her technology can unlock his best self.

And while Dal’s primary impulse may be driven by vanity and jealousy, I believe he also thinks a better Dal benefits the Protostar and will make him a better captain. Specifically, of course, better than Okona.

Meanwhile, Murf’s new form starts out as clumsily dangerous to the crew but turns out to be effectively lethal to those who pose a threat to his friends.

It’s fascinating to note that the show’s creators took a creature mentioned ONCE before in Trek canon as a random insult on Star Trek: The Next Generation Season 1 Episode 19 and actualized one of the most intriguing species ever introduced.

I, for one, look forward to a future episode devoted to a day in the life of Murf. Imagine approaching the world as an indestructible, bipedal, completely malleable, sentient creature with unending joy and curiosity. Seriously. Make it so.

Finally, to complete our triumvirate of unmaskings, WHAT THE HELL, Asencia?

I’m making a lot of assumptions to explain away the plot hole shenanigans that pop into my head when considering how an individual whose species is unknown to the Federation database could insinuate herself into the bridge crew of Vice Admiral Janeway.

Especially with a Chief Medical Officer as thorough and nit-picky as Dr. Noum.

Scenario 1: Ensign Asencia was, at some point, a young female Trill Starfleet officer. The Vau N’Akat agent traveled back in time, killed her, and took her place using the implanted camouflage tech.

Scenario 2: The Vau N’Akat agent arrived at some point earlier than Asencia’s Starfleet entrance, entered the Academy disguised as an unpaired Trill female, and managed to fake her way through her classes, mission assignments, and medical exams.

Then we have to consider how she hid a Drednok unit onboard this whole time.

I don’t even know where to begin with that.

Does every Vau N’Akat time travel with a Drednok? Are they all as imperious as The Diviner’s was?

Will this current memory-addled Diviner sign back on with the Vau N’Akat’s plot to pre-emptively destroy the Federation before they can make first contact with their society?

If the Federation can’t abide by the rule of law, we’re no better than the very forces we oppose.

Does anyone else think Gwyn’s Heirloom fretwork weapon may be the answer to deactivating the Living Construct? Just a thought.

Also, did anyone else think the Vau N’Akat agent sounded a lot more like Gwyn when she changed from Asencia’s Trill form? It’s probably just Jameela Jamil showing off her vocal range, but it was dramatically spooky all the same.

How will things unfold on the Dauntless now that Asencia’s revealed her true identity?

Will Okona return and redeem himself?

Where will the Protostar head next? They’re in the Beta Quadrant now. How will they manage to avoid hails from Federation vessels? Or will they keep hiding out in the Neutral Zone?

Does anyone think the Tal Shiar are going to give up after getting their butts kicked by a human augment and a slime worm?

Beam your predictions down to the comments section! No fear. No judgment. Let’s get talking!