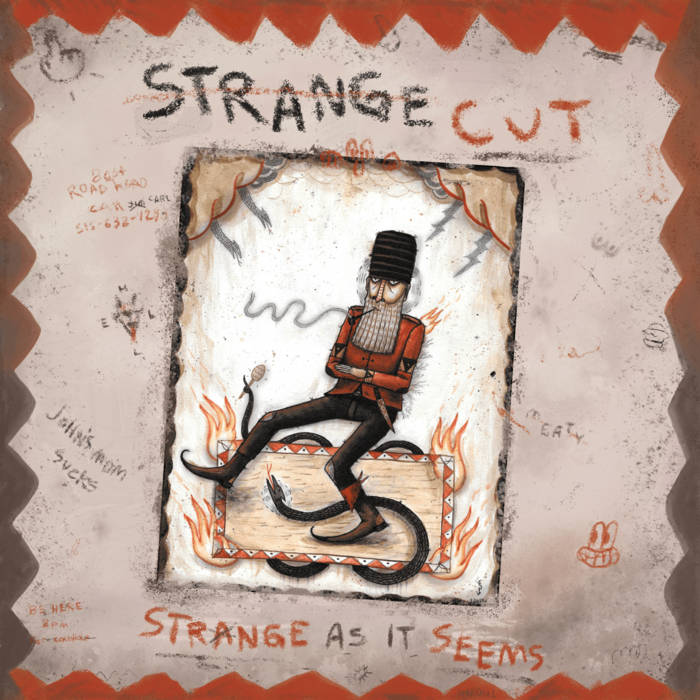 Strange Cut started off with Jarrod Brown (lead vocals/lyrics) and Rob Dessimoz (bass) in 2015. Nathan Burns (guitar), Josh Schmidt (guitar/backing vocals) and Andrew Hylton (guitar/backing vocals) go on to round out the band’s sound. Their immediate music brings to mind such artists like Queen of the Stone Age and The Black Keys. The band says that they basically keep to an ‘anything goes’ process when making music but like to keep their sound ‘pop accessible’ on their latest album Strange As It Seems. Their sound can go from blues to grunge and indie rock at a drop of a hat. With 12-tracks on this hefty record, the band fills this album with their verve and energy.

Strange As It Seems gets going with “Backlit Gown,” where radioactive guitars and a bustling sound gives off an energized performance from the band. Brown’s growly and gritty vocals really sets the stage for the band as the instruments come together. I was getting some blues here as well as pop and indie rock. I was instantly reminded of Queen of the Stone Age and The Black Keys. The guitars also sounded great. Starting off with some synths and a hard rock sound, Brown’s vocals struts in with emphasis on attitude and feeling on “You Poor Devil.” I think Brown is able to add a lot of character to his vocals which I loved. This seemed to be a dark and ominous track with metal and hard rock riffs. There was a sauntering groove to “Shotgun Reasons” that reminded me of a mix of Bossa nova and the blues. I enjoyed the jaunty rhythms. It made for a melodic listen. I think the band is able to deliver on all counts. The Black Keys references once more makes sense here.

More radioactive guitars come in for a spiraling and shimmering sound on “Hail Mary.” The instrumentals all came together for a great effect. The sound was very alternative rock and indie. Brown’s vocals once they came in reminded me of Brandon Boyd from Incubus. More hard rock comes in alongside some lively percussion on “Say What You Will.” I was loving the energy of this number. Next, Brown belts out the lyrics with feeling. Though the vocals were mellow, the music, itself was an intoxicating pop mixture. “Say What You Want” starts off with some heavy bass lines. Once Brown’s vocals arrive, it clinches the metal-inspired and hard rock vibe. I was getting some grunge in the sounds. Brown’s singing soars over this recording for an emotional performance.

“Snake Feet” starts off with some happening percussion. I was getting some great ‘80s vibes from this song. I was instantly reminded of George Michael. This was definitely a sultry and sensual track that will fill your senses. On “After Thoughts,” more sizzling percussion comes in here for a revved sound. The vocals are a low hum in the background as stripped guitar riffs sound out. The vibes are very ghostly. Next, a wall of melodic guitars come in alongside some spoken word. There was a ton of mood and feeling to this song. The band comes in full-blast with this energized rock romp on “Rapture.” Together with Brown’s gritty vocals and the band’s driven vibe, this gave off a hard-hitting sound. The band choses to send us off with this exciting finale.

Though the band says they have no plans to tour with the group keeping things strictly online-based, I think the record exhibits enough of the band’s live sound for us to get a taste of what the band might sound like in-person if they ever do go on tour. Filled with a raw and oftentimes gritty sound, the band will take you there with their on-point delivery as they play with the kind of chemistry that could only come from good friends who’ve jammed together for a long time. With that being said, the group has got something here that a lot of us will be appreciating. This was a good start and I look forward to seeing more from the band soon.