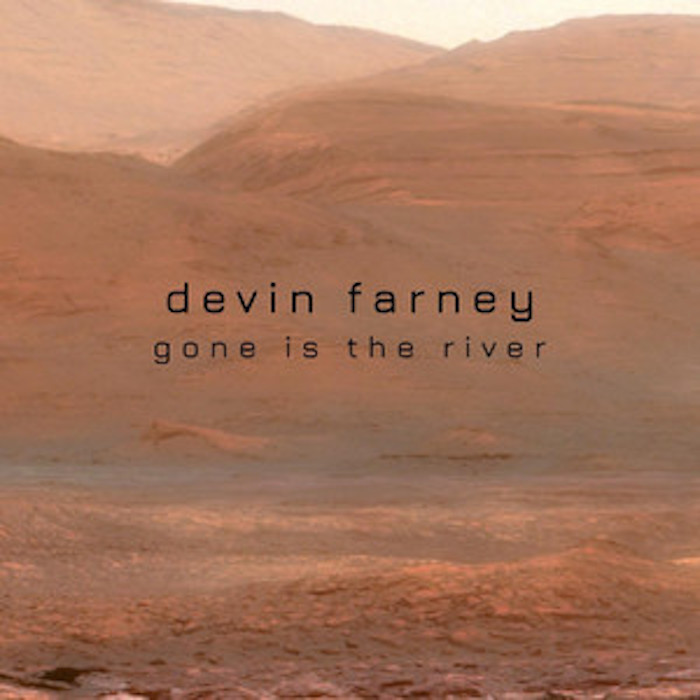 Devin Farney is a freelance recording artist working out of San Francisco, CA. He coyly states that he has “a wide variety of releases, tv-film syncs, etc. under my belt.” However, just a short visit to his website will have your head exploding with his breadth of experience and Pro accolades. I’ll quickly add that within seconds of playing him, his music boasted the complexity and melodicism of Van Dyke Parks or Brian Wilson. His previous release was called Is/Was andhe is back with this brand new EP titled Gone Is The River.

Farney’s biography and credits are simply too lengthy to summarize. I’ll just mention that his music has been utilized by local filmmakers, tv shows, playwrights and other artists, and that his arranging and transcribing skills have been employed by composers Terry Riley, Glen Roven, Arthur Kampela and others, as well as the organizations like the Assyrian Aid Society of America.

Farney describes this EP as a “continuation of my exploration of music at its most MIDI-free and organic. The five chamber-pop vibe tunes are melodic at their core and piano driven, but most feature other instrumentation (strings, organ, electric piano, drums and percussion, guitar, pedal steel, etc.). This is my ‘ecological’ EP. The songs all deal with themes related to environmental upheaval: droughts, fires, continental drifts, hurricanes, and those who think they’re a hoax.” Recording took place at the Little Green Shack Studios in the California Bay Area.

With the opening song “In Heaven” my first impression very much tracks with what Farney said about his previous album, “wanting to make something heavily indebted to traditional ‘60s pop in the vein of The Beach Boys and The Beatles, but with a modern twist.” First, he’s got a velvety smooth voice that effortlessly moves into falsetto like a young B. Wilson. The arrangement of this particular song has a somewhat country vibe, thanks mostly to the pedal steel (much of Wilson’s Smile epic has a similar sound). The strings and percussive touches are also quite impressive. Van Dyke Parks’ solo work tends to be quite idiosyncratic (some would say weird) but his arranging skills are unmatched, except perhaps for the Parks-like arrangement I’m hearing in this song!

“Invertebrates (Back Where We Started)” has unlikely echoes of Randy Newman’s piano and vocal melodies (though with a less froggy voice). The layers of melodic invention and their gorgeous realization with a fairly sizable studio band has my tongue hanging out, and I feel like Salieri from “Amadeus” trying to make sense of it. Just great, great music!

“This is Fine” is more of a rock-steady track in the ’70s radio tradition. I have a strong suspicion the title and subject are influenced by the internet meme of a dog having coffee in his kitchen while his entire house burns down, smiling and saying “This is fine.” Of course the point is that our country seems to be burning to the ground and not enough people seem concerned or alarmed about it, which would track with Farney’s idea to make an ecologically-based EP. At any rate it’s a great idea for a song and feels fun and upbeat despite the gloomy subject matter. There’s an almost classical ending with crickets, too.

“Yours to Keep” is a very short (one minute) torch song for piano and voice in the tradition of “My Funny Valentine.” Unexpected but beautiful. “It’s a Hoax!” is perhaps the closest to Van Dyke Parks’ solo music. Aside from the rich arrangements and production, Farney at times sings like Parks with his Beach Boy pals providing harmonies. Parks’ album Jump, even some early Genesis may be touchstones.

This is the first time I’ve heard Farney but I’m already an unabashed fan boy. If you’re open to a bit of sophistication or even just some gorgeous sounding tracks, give him a listen!