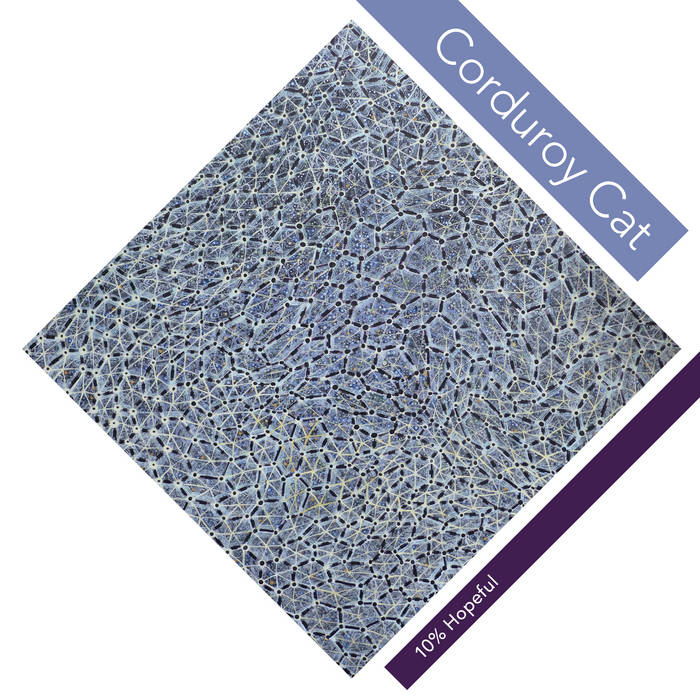 Guided by an awareness of music in all its infinite variety and lore, Corduroy Cat has torn apart the singer/songwriter format with an improvisational flair that draws on the human need to dance, to fly and to dream. The group is a four-piece indie band doing all original music in Chicago, Illinois. Corduroy Cat recorded their debut album 10% Hopeful last March at Electrical Audio with Steve Albini at the controls. They also recently played The Hideoutin Chicago and have regular engagements at Montrose Saloon, among other places in Chicago. The band had a vinyl record coming out around the end of the year in 2022 and then went back into the studio to record a follow up. For lack of a better term, they’ve been using “indie rock” to describe their music but stylistically Corduroy Cat’s music is all over the map and difficult to pin down. Structurally, all the songs arise from within the singer/songwriter paradigm: they’re mostly story songs – sometimes from songwriter Dan Doherty’s personal life, sometime as stories drawn from American history or the natural world, sometimes all of the above. Rounding out the band is Bob Poole on bass, Marv Doolin on guitar and Kalyan Pathak on drums. 10% Hopeful is a genre-defying, modern-day song cycle depicting a journey emerging from a dream, into darkness then back into the light.

First up is “Vivian” – a very interesting song lyrically. It’s about a dream that one of the members of the band had. He is asking for some kind of help, or rather, wanting to tell this “Vivian’ the shape I’m in.” Later she reminds the dreamer, that this world “can be a terrifying place” and “to remember the fires that forged you.” The words get pretty deep on this opener. The band as a whole are tight and crisp technically, but stylistically, I wouldn’t pigeonhole them into one genre, as mentioned in the previous paragraph. “When the Lilacs Bloom” is a song about the loss of a friend through death. The words describe a sort of love letter to a ‘Ronny’ and the singer mention all the things that she has missed – the Cubs finally winning it all, her bass guitar getting fixed up and the Twin Towers falling (although that’s something I would prefer never seeing again). Another deeply personal song that features a more Americana rock sound, complete with a bright, jangly guitar and congas. Next is “Deception Pass” and it features a more indie rock sound, more dynamic energy all around. Lots of great drum fills by Pathak, too. On “Opioids(make me blue)” you’ll hear plenty of cowbell – but kidding aside, the opening line “I don’t want to be married to a junky” says a lot as to what this song is about. I thought the band showcased their talent quite well on this track – the piano, the guitar solo – all of it.

‘Oumuamua” (feat. Bruce Lamont) is about a ‘distant traveler’ a ‘Solar Mother’ and a ‘Carbon-based brother.’ The title of the song is actually a space term and it refers to the first interstellar object, or star system, that passed our own solar system. Well, let me rephrase that – it’s not a science-y term – translated, it means ‘Scout’ in Hawaiian. It was given a Hawaiian name because it was first discovered by a telescope located at the University of Hawaii. Musically, the band mixes styles of contemporary jazz, indie, soul and rock. On this particular song, there’s something about Corduroy Cat’s sound that remind me of Hothouse Flowers, Big Head Todd and the Monsters, Dave Matthews and other bands like them that mix soul, blues and rock together. If you like the sounds of traditional Indian instruments like the tabla and the sitar, then you’ll enjoy “Mary the Elephant.” But wait – the band abruptly changes to a two-step country-ish style soon after. Lyrically, I think this is a song about an actual elephant named Mary, that was an ‘employee’ with some traveling circus, along with the bearded lady and the usual suspects. But then she escapes. Not a good life for any elephant in my opinion. “The Space in Between” features a crisp, light sound in the beginning and words that are some of the most introspective on the album.

On “500 Pelicans” you’ll hear the band play a more contemporary pop style about a kind of love story, centered around questions about the dinosaurs, “crabs on the concrete stairs” and watching 500 pelicans diving into the water. Not sure if 500 pelicans is a metaphor for something? Interesting tune either way. The group’s last tune is also the album’s title track “10% Hopeful.” This last track is catchy, with a nice piano/guitar melody that was enjoyable to listen to. This song has a more traditional pop-rock structure (verse, verse, chorus, verse, chorus) packaged up tight in less than four minutes. I think there’s a bridge part in there, too. This song felt to me like one of those hallmark-crowd pleasing numbers that features a memorable one liner. Here, “I’ll remain 10% hopeful, despite all I see” is both optimistic and cautious. There’s irony and self-doubt in that line for sure, (or better yet, doubt about the world we’re living in).

All in all, a pretty solid and consistent album from this talented Chicago quartet.