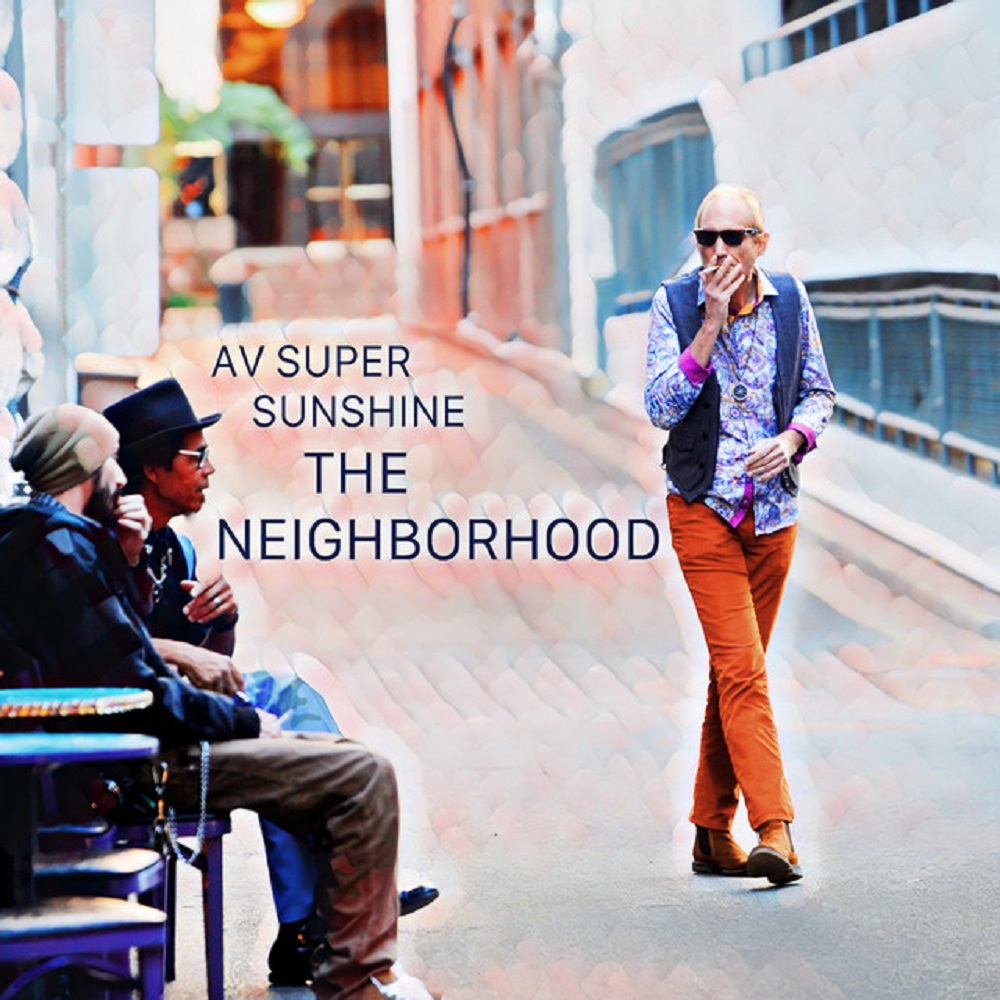 AV Super Sunshine’s “The Neighborhood” is another kick ass single from the irrepressible Andy Victor and company. AV is working with a familiar cast of characters to bring this one off such as longtime collaborator Michael Bradford, but it crackles and pops with his personality like every preceding single. AV stands apart from the scores of indie musicians/songwriters working the scene today. He doesn’t imitate anyone. Instead, he crafts recognizable sonic landscapes within his songs while also stamping them with his unique and colorful personality. His musicality is beyond question as well and this new single reflects the ongoing development of his gifts.

The rock version strides. It’s really impressive how it launches straight into a satisfying groove, no preamble, no messing around. It keeps that inspired spark burning throughout the song’s entirety. It avoids sounding heavy-handed and, instead, moves with a confidence that never puts a foot wrong over the song’s 3 minute plus running time. The rhythm section gives it considerable ballast. It is the drums, especially, that keeps pushing the song forward, not in a boring straight-ahead away, but instead opting to shake the listeners at least once in every passage.

The raw and woolly guitar sound AV and his cohorts achieve for the rock version is memorable. It balances a light touch with just enough bite to draw blood. The playing exudes attitude and locks in early to the song’s aforementioned groove. It is nothing but pleasure to hear effortlessly AV zeroes in on that groove, as well, and juxtaposes his voice against the instrumentation. It makes for a rocking and seamless whole.

He does not change his vocal approach much for the EDM/pop version. The structure isn’t as readily identifiable as the song’s musical character gears itself much more towards overwhelming listeners rather than ingratiating itself with listeners. It’s appealing, nonetheless. Its muscular sound carries AV’s vocal along on an undulating wave, rising and falling with him, and makes clear cut use of dynamics that the rock version doesn’t explore.

Framing this song with the structure of two very different aesthetics makes for compelling listening. AV Super Sunshine has proven his mastery of myriad forms and “The Neighborhood” underlines that for newcomers and longtime listeners alike. The EDM/pop version is a little longer, while not meaningfully so, and both versions of the song hinge on AV Super Sunshine’s laser focus for their success.

AV Super Sunshine has pursued this path for almost a decade now and his songwriting acumen is far from exhausted. Instead, he continues writing and recording songs that are cut from a different cloth of character than his contemporaries – rife with retro tendencies, but recast in a thoroughly modern guise. He does it, furthermore, without any major conglomerate push behind him and has built his reputation through hard work, talent, discipline, and word of mouth. “The Neighborhood” is his latest testament to artistic powers burning no dimmer than they did at the beginning. In fact, they may be brighter than ever before.