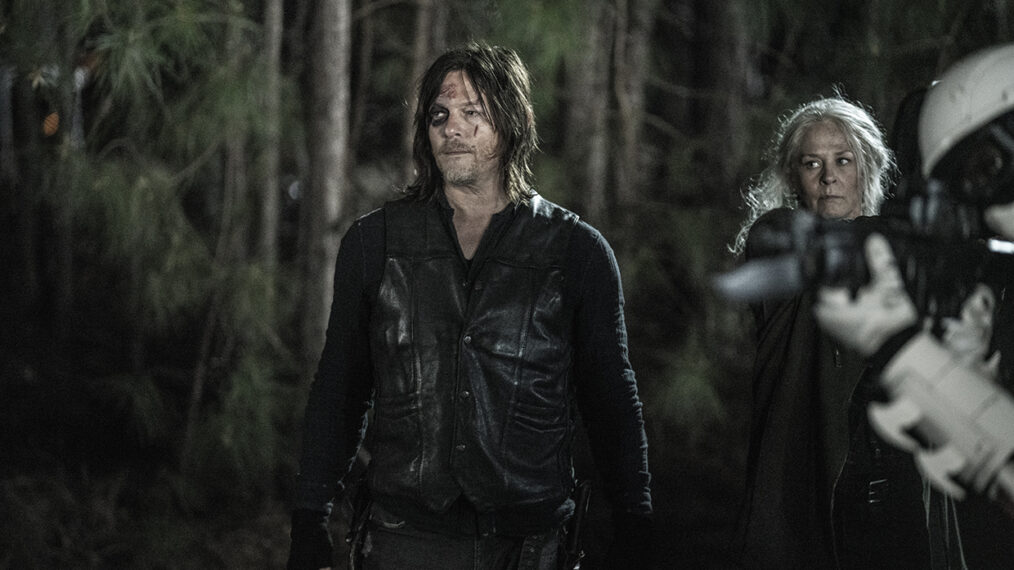 SUNDAY: The series that took TV horror to a new level of graphic extremes, unafraid to kill off major characters during its post-apocalyptic journey, presents its final chapter after 11 seasons. (This isn’t the end of the Walking Dead universe, with multiple spinoffs already underway.) Preceded by a Red Carpet Live show (8:30/7:30c), the supersized 90-minute finale finds our survivors in graver peril than usual, with young Judith’s (Cailey Fleming) life in the balance as the adults fight off a swarm of zombies from within their walled-off section of the Commonwealth that they’re trying to take down. Who will survive this final battle? SUNDAY: Wayne Brady hosts the music-driven awards show, where fans pick the winners. Among the highlights: a tribute to Icon Award recipient Lionel Richie, with Stevie Wonder, Charlie Puth and Ari Lennox performing. P!nk delivers a musical homage to the late Olivia Newton-John, and others taking the Microsoft Theater stage in L.A. include Carrie Underwood, Imagine Dragons, Wizkid, Tems and Yola, whose “Break the Bough” is the AMA’s “Song of Soul.” Bad Bunny leads the nominations with eight, with Beyoncé, Drake and Taylor Swift close behind with six. SUNDAY: After the AMAs, switch to the streamer for another spectacular musical performance, by the Rocket Man himself, in a three-hour concert special from the venue that put him on the map back in 1975. He’ll perform his greatest hits, joined by Dua Lipa, Kiki Dee and Brandi Carlile in what is being billed as his final North American performance. SUNDAY: Funny, Stewie doesn’t look 400 (days old, that is). Fox’s irrepressible animated satire marks its milestone 400th episode with Stewie exposed to all sorts of haters when a pop star sics her fan base on the sarcastic infant. Elsewhere in the raucous Griffin home, Peter gets lap band surgery and marvels at all of the excess skin. SUNDAY: More storm clouds over paradise, as Harper (Aubrey Plaza) begins to suspect that Ethan (Will Sharpe) isn’t being entirely truthful about what the guys were up to during the wives’ overnight away from the hotel. On a happier note, neurotic Tanya (Jennifer Coolidge) gets over her husband’s departure by basking in the attention showered on her by Quentin (Tom Hollander) and his campy cronies. “You’re like the heroine of your own Italian opera,” Quentin gushes. Sounds about right. Let the Right One In

SUNDAY: An affecting episode of the supernatural drama goes back 10 years to the night of the attack that turned eternally 12-year-old Eleanor (Madison Taylor Baez) into a vampire. For her father Mark (Demiån Bichir), it’s bad enough to watch her suffer. But when it comes to the rules of vampirism and how to keep her ravenous child fed, the learning curve is steep. SUNDAY: A reboot of the Depression-era family drama presents its second holiday film, with Teddy Sears taking over (from Ben Lawson) as patriarch John Walton, providing for his large brood as Thanksgiving 1934 approaches. The arrival of a young boy into the Waltons’ world changes everyone’s life, almost certainly for the better.

This In Your Inbox Every Day