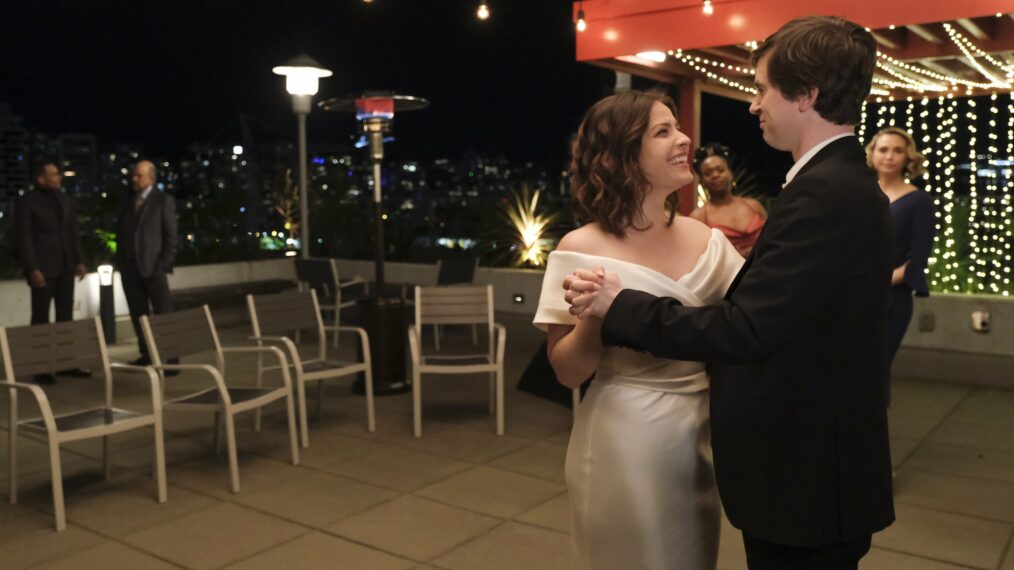 While just-married Dr. Shaun Murphy (Freddie Highmore) and bride Lea (Paige Spara) enjoy a happy wedding dance, elsewhere in the hospital lies Dr. Audrey Lim (Christina Chang) bleeding alongside Nurse Villanueva (Elfina Luk), stabbing victims of the nurse’s unstable partner. And so the medical drama’s sixth season gets off to an intense and emotional start, when the desperate culprit becomes an active shooter, taking several of the good doctors hostage while others perform triage within a lockdown with limited supplies. Can Shaun get through this without a meltdown? The opening moments suggest otherwise. DAVID! The beloved award-winning comedy, which became a hit and ultimately an Emmy powerhouse after exposure on Netflix, has found a new streaming home on Hulu. All six seasons of the warm, warped sitcom are again available for streaming. If you’re just discovering this series about the wacky Rose family, who after falling on hard times move to the backwater town that patriarch Johnny (Eugene Levy) once bought as a joke, you’ll see that it gets better and sweeter as it goes. Levy, son Daniel, Catherine O’Hara, and Annie Murphy all won Emmys during the historic final-season sweep. After his time in space, Ben (Raymond Lee) is grounded back on Earth as he leaps to the 1970s — and straight into the boxing ring. Can he keep his footing and help his new persona, up-and-coming boxer Danny Hill, win the big title fight? Back at Quantum Leap HQ, Magic (Ernie Hudson) and his team sift through clues from Ben’s past to try to figure out what’s behind all of this leaping. The House That Norm Built

Before HGTV, before Home Improvement, there was This Old House, the renovation show that defined the genre. One of the constants through these many seasons was master carpenter Norm Abram, who started on Episode 2 back in 1979. As he retires to his home workshop, an hourlong retrospective sends Norm off fondly, with classic archival footage and testimonials from celebrities and colleagues. More power to ya, Norm.