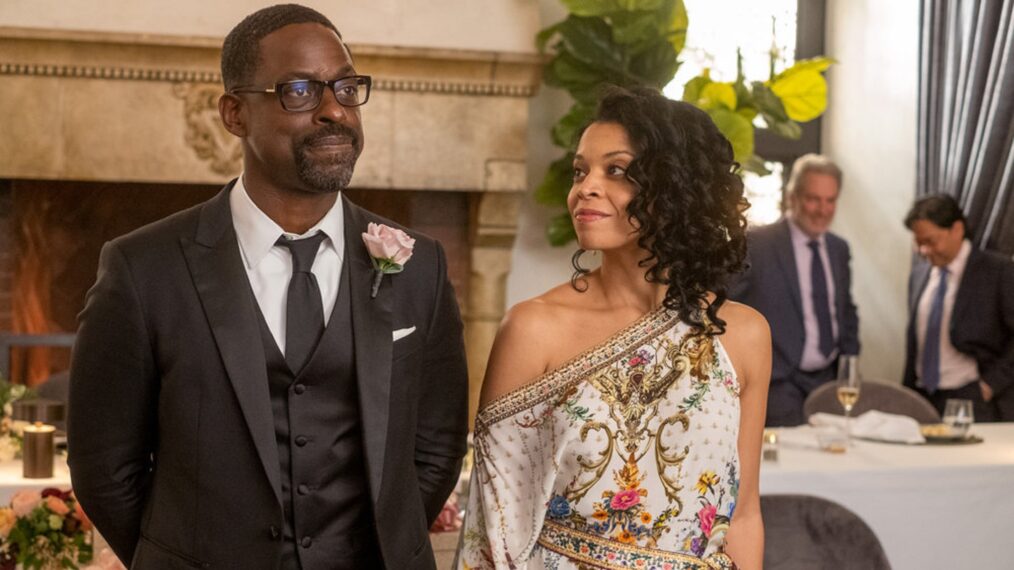 ‘This Is Us’ Stars Wrap Filming on Series — See The series finale for This Is Us is mere weeks away, and we’re not ready for the bucket-loads of tissues we’ll need to get through the sure-to-be-emotional episode.

As if that couldn’t make fans emotional enough, stars Susan Kelechi Watson and Sterling K. Brown are teasing their wrap on the series with a behind-the-scenes look at their final scene. “We just wrapped our last scene of the series…️🥲 #ThisIsUs,” Kelechi Watson tweeted alongside a selfie of her and Brown in their aged-up looks as Beth and Randall Pearson. “The end of many eras…literally!!” Brown’s tweet began, before addressing his onscreen wife. “Su, it has been an absolute joy and pleasure to be your TV husband and grow old together as Pearsons.️ @skelechiwatson #ThisIsUs.”

As the photo and messages, above, convey, there’s nothing but love between the onscreen couple who have been entertaining viewers since 2016. While Beth and Randall may have had their ups and downs throughout the seasons, it’s clear from the wrap photo that they’re going out on top as their couple-goals selves.

And they weren’t the only stars celebrating the show’s ending as Mandy Moore, Caitlin Thompson, and Jon Huertas shared celebratory photos and videos marking the end of filming. This Is Us may not officially air its final episode until Tuesday, May 24, but for the cast, the finale is coming much sooner as they finish filming their final days on the show.

“Last day of work. The greatest 6 years at the best job I’ve ever had,” Moore, who plays Pearson matriarch, Rebecca, wrote. “Gratitude, gratitude, gratitude (and definitely lots of tears). #thisisus.” The caption was accompanied by an image of scattered folding chairs behind the scenes of the set.

That’s a wrap. What a gift. What a ride. Thank you for all the love and support these past six seasons. Xx #ThisIsUs pic.twitter.com/NZwhVuqQJh

Meanwhile, Thompson, who plays Kate’s (Chrissy Metz) onscreen bestie and mother to Kevin’s (Justin Hartley) twins also got swept up in emotions. “That’s a wrap. What a gift. What a ride. Thank you for all the love and support these past six seasons. Xx #ThisIsUs,” Thompson tweeted alongside a mirror selfie.

And in celebration of his big “Miguel” episode, Jon Huertas posted a silly video from previous episodes where he and Brown got in the dancing spirit between scenes. “How me, @sterlingkbrown & @mandymooremm get down between scenes!” he captioned the funny clip.

There are even more great farewell posts that have continued to surface from the cast as well. Below, scroll through some of the stars’ goodbyes to This Is Us before the series finale airs on May 24.

Saying thank you and good bye to one of the finest actors and human beings I’ve ever had the privilege to work with. ⁦@SterlingKBrown⁩ will do many great things in his time to come. What a wonderful human being. #ThisWasUs pic.twitter.com/oTUvZycbre