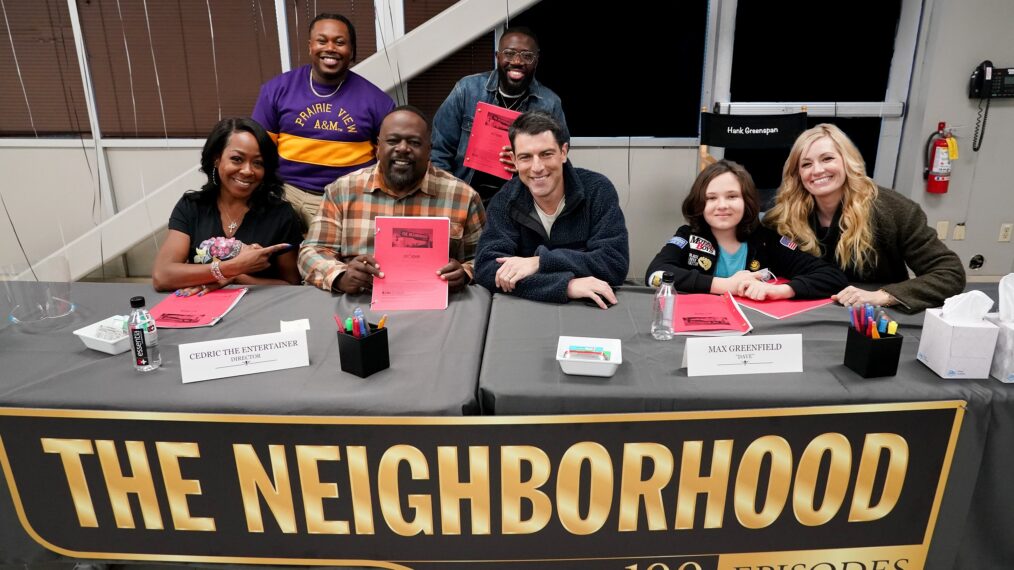 ‘The Neighborhood’ to Crossover With ‘The Talk’ for 100th Episode The Neighborhood is ringing in a special milestone this spring as the show reaches its 100th episode and TV Insider has your exclusive first look at the installment. In the episode, Calvin (Cedric the Entertainer) is struggling to find the perfect birthday gift for Tina (Arnold) as he has a bad track record with the task. So this time around, Calvin’s doing everything he can to get her something she’ll love. At the same time, Gemma (Behrs) is determined to get Jerry O’Connell, whose kids attend her school, to donate VIP tickets to The Talk for the school’s fundraising auction.

As the logline teases, O’Connell will appear as a guest star in the episode along with his fellow cohorts from The Talk with Sheryl Underwood, Natalie Morales, Akbar Gbajabiamila, and Amanda Kloots also guesting.

“We are so excited to have reached this 100th episode milestone, and even more so to have our show The Neighborhood mash-up with The Talk and its wonderful hosts. They are a staple of Daytime television and resonate as the real deal even in our situational comedy. We are ecstatic that they wanted to join us on the playground,” Cedric the Entertainer says of the exciting episode.

Meanwhile, executive producers and showrunners Mike Schiff and Bill Martin also open up about bringing The Neighborhood and The Talk together.

“The Los Angeles setting has always been a big element of the show, and we’ve seen our characters at LA landmarks from Dodger Stadium to the Santa Monica Pier,” they share. “But we’ve never had fun with the entertainment business, a huge element of life in LA, where every school has its celebrity parents and where TV tapings can be a fun day out. The Talk is right across the lot here at the studio, Max Greenfield and Jerry O’Connell are good friends, so bringing these two shows together just felt like a natural to us.”

Catch a first look at the table read above, and stay tuned to find out when “Welcome to the Milestone” will air on CBS this spring.