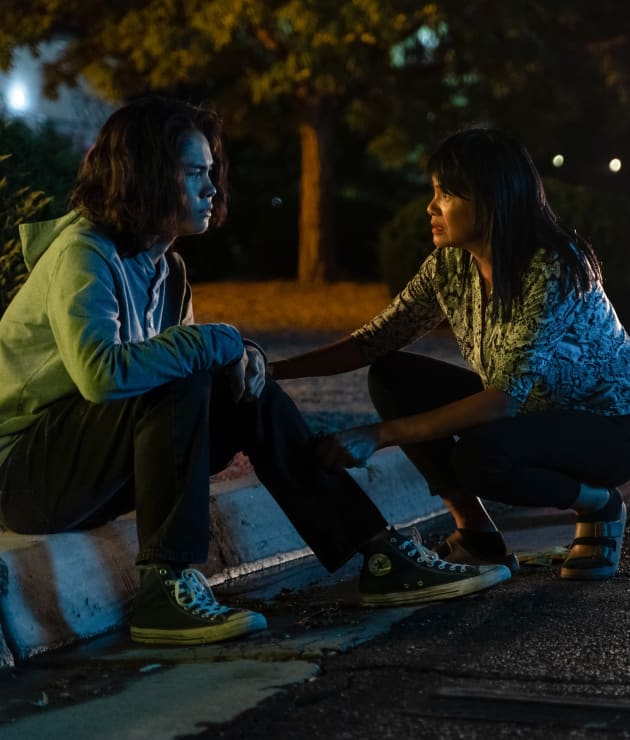 There is lots of eye candy to keep us happy.

We met the elder De La Rosas. What was your reaction to them during this visit?

Jasmine: I said it online, but I appreciated the series touching on that thing that isn’t exclusive but is very prevalent with families of color where parents will place their sons on pedestals, and the family dynamic is so rooted in the son never doing wrong.

The De La Rosas were something else, especially the father. I felt so badly for Thony and Fiona because they were at the mercy of their criticism. Their presence made things difficult and emotionally exhausting. I about lost it when they said they wanted to take Luca.

Whitney: I agree, Jasmine. It felt like a very realistic family dynamic, which I can appreciate, even if it’s frustrating to watch. Their visit was a mess, and watching how they treated Thony and Fiona was difficult.

Laura: I agree with both of you. It was a different and realistic family dynamic but frustrating to watch. It was so hard to watch the father belittle Thony’s parenting choices when she barely had a minute to celebrate Luca being better. I was relieved that the mom told Fiona she was proud of her mothering skills.

Chris broke down after hearing his family fight. How long until he breaks down and confesses?

Jasmine: I’m very concerned about this because it’s too much for a teen to carry and not be able to talk about it. I genuinely enjoy how Chris has been incorporated into the series more. I’m terrified that he will crack soon. I don’t know who will hear it, which is concerning.

Whitney: That is such a heavy burden for anyone to carry, but especially a child. He has to have so much fear and guilt raging inside him every day, and that kind of pain will eventually catch up to him.

I wonder if he ends up saying something, not necessarily trying to confess, but just trying to talk through his emotions, and the wrong person happens to catch wind of it.

Laura: Again, this is such a heavy burden for a teenager, and he’s already showing signs of cracking. It’s terrifying whom he’ll tell, not only for the consequences but how it will affect Luca. It’s lovely seeing him play a more significant part in the story.

We learned a little more about Garrett. Are you interested or not in learning more about him this season?

Jasmine: I love Oliver Hudson. But I don’t give a damn about Garrett. He’s such a hot mess, and every time they show us bits of his personal life, I wonder why he’s pouring all this energy into staying in Thony and Arman’s business instead of getting his life together. Get YOUR own life, sir!

Whitney: Jasmine and I are always agreeing! I wish I could disagree with the drama, but I also love Oliver Hudson and can not stand Garrett. So no, I am not all that interested in his ex-boo. The man is one more L away from losing it all, and he really should fix his life and leave Thony alone.

Laura: I also enjoy Oliver Hudson, but I’ve only enjoyed Garrett in scenes with Katherine Russo, probably because I adore Liza Weil. Garrett has a pattern of falling for his CIs, and she’s the only one who hasn’t put up with him. I don’t want him to mess up Thony’s life.

Jasmine: The eye candy and talent they keep delivering to us on this series, you guys, we are truly blessed. I LOVED seeing Naveen Andrews. Hayak had to die to get a new antagonist, and his sacrifice wasn’t in vain.

He’s deliciously mysterious and evil right now, and I’m excited to see what happens with his character. I also like Nadia being brought into the golf more because of him. This messy crime quadrangle is riveting!

Whitney: Naveen Andrews is a brilliant actor, so I was stoked to hear he joined the cast. And he was fabulous here. He was a menace from the second he showed up on-screen, and I am a person who doesn’t need their villains to be layered so much as I need them to be scary.

I want to genuinely be concerned about whether the good guys can defeat them. I felt that when Robert showed up, he would be one of those bad guys. I am so excited about this story.

Laura: As Jasmine said, we’ve got eye candy this season! Naveen Andrews impressed me as Robert from the start. He was confident and unapologetic, and he’ll make a fun addition. I can’t wait to see him interact more with Nadia, Arman, and Thony.

Now that Arman is out of prison, what’s next for him?

Jasmine: A hot shower, a stiff drink, and a good suit. I loved his release. He and Nadia were radiating power couple.

With Hayak gone, Arman gets to step it up and hold his own in the business. He gets to pursue his own empire while evading threats, old and new. I like the prospect of him not having to answer to Hayek but still having Robert’s favor looming over him.

Whitney: Well, without Hayak, and no money, I would assume he needs to find another source of revenue. And I’m sure that’s where Thony will come in. They make a great team, so I expect to see them figuring out a way to free Arman from Robert’s thumb.

My bold prediction for the season is that by the end of it, Thony and Arman will essentially be king and queen of their own criminal enterprise.

Laura: I also think we’ll see Arman reinvent himself without Hayak looming over him. He’s always wanted to be his own man. That may prove challenging with him indebted to Robert, but I’m excited to watch Arman and Thony rule the criminal world.

What was your favorite part of Episode 2?

Jasmine: I mean, I cannot pretend like that prison visit with Thony and Arman wasn’t like catnip for me. Anytime they interact, it’s prime viewing.

But I enjoyed the family exploration during the De La Rosas visit. And I loved Thony, Fiona, and Chris having their moment and reassuring each other that they must stay strong.

Okay, and that prison fight was insane! Like Whitney said on Twitter, Arman’s towel was hanging on for dear life! Every fiber understood the assignment.

Whitney: That prison fight was WILD. That poor towel deserves an Emmy.

I am an unapologetic Armony girl through and through, so I loved seeing them together, even separated by glass. Their chemistry will never not be intoxicating.

Laura: I was so happy to see that Arman and Thony prison visit, but I was just as excited to see Arman strut out of prison in a handsome suit.

I also loved Fiona comforting and reassuring Chris that she would protect him.

Over to you, Cleaning Lady Fanatics. What else would you add to our responses? Chime in below in the comments.